Parts of the economy affected by the virus since early 2020 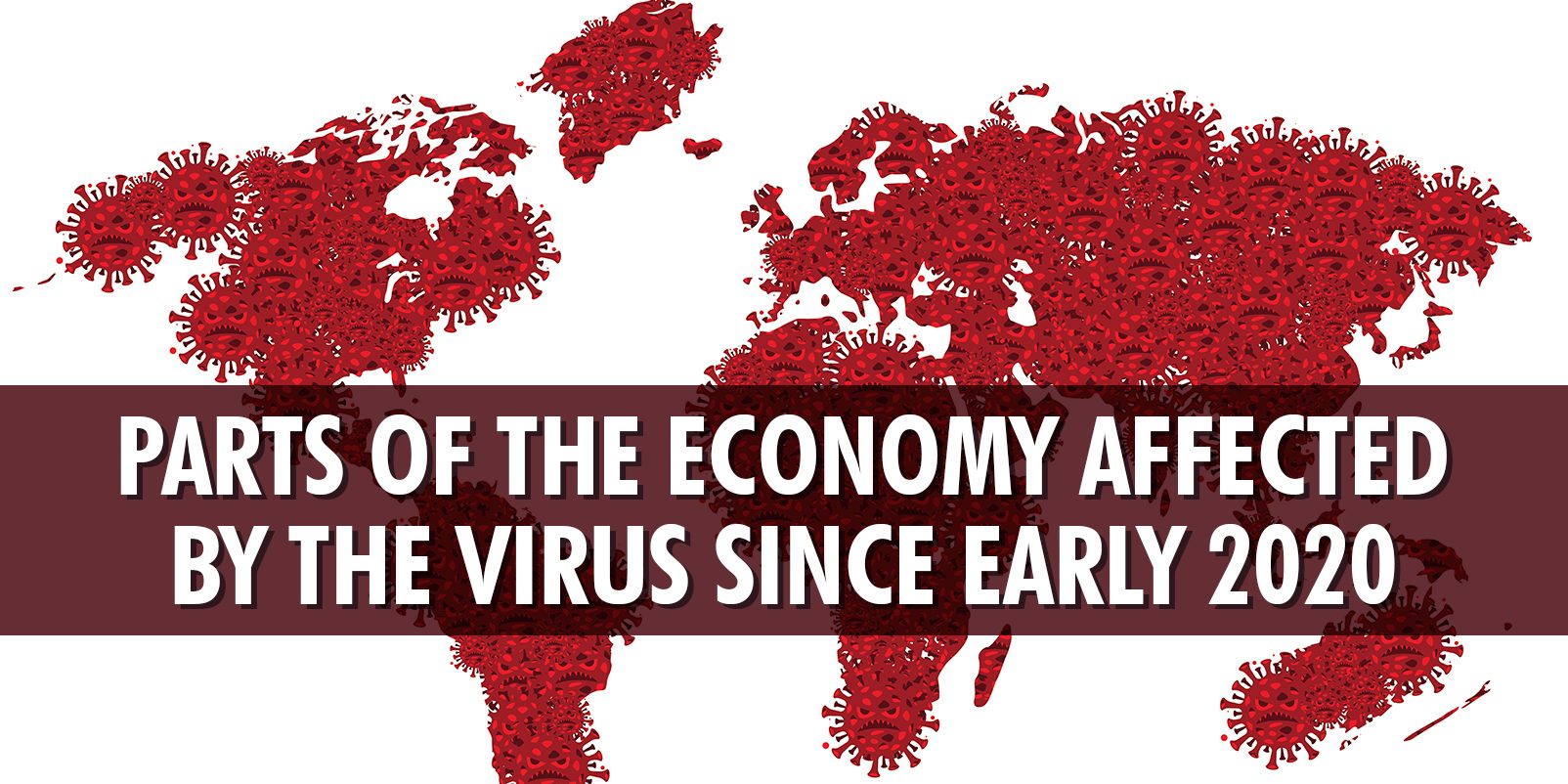 Parts of the economy affected by the virus:

The virus was first detected in China and it has infected around 185 countries worldwide. Since then, the global economy collapsed like a paper tower. Big shifts in stock markets, where shares in companies are bought and sold, can affect the value of pensions or individual savings accounts (ISAs). The FTSE, Dow Jones Industrial Average and the Nikkei have all fell dramatically since the outbreak began late December. The Dow Jones index and UK100 faced their biggest quarterly losses since 1987. Investors worried about the virus spread that will destroy economic growth and that every stimulus package relief would not be enough to confront this massive drop in the economy. Many Central Banks around the world slashed their interest rates, in a way to support businesses to borrow cheaper to encourage them to spend more to boost the economy. Late March. after US Senate passed $2 trillion aid bill stock recover some ground, some analysts noted that markets could be volatile and extremely unstable market conditions. 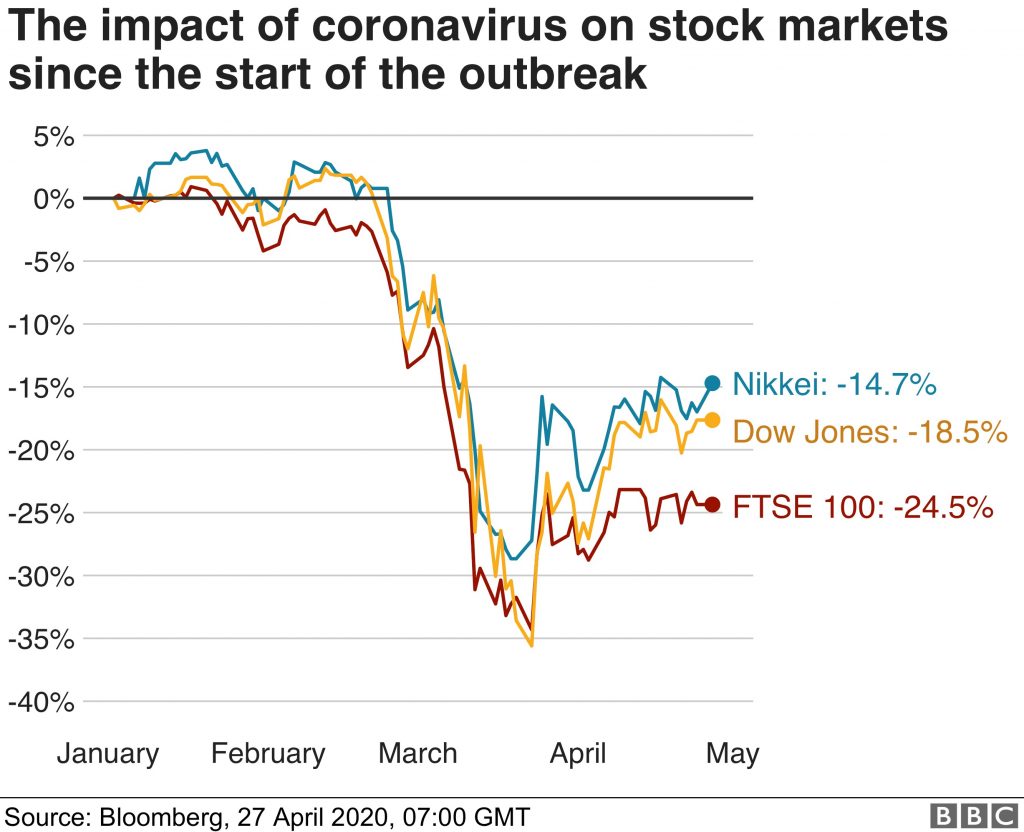 According to weekly Initial Jobless Claims and Non-Farm Payrolls report, more people seeking to work in the United States and the number of people filling for unemployment hit a record high, signaling an end to an decade of expansion for one of the world’s largest economies. Data below shows the unemployment course since January of 2020 from US Bureau of Labor Statistics. Additionally, nearly one million people in UK also applied for benefits within two weeks in March.  The government lockdown measures to limit the virus spread and the closure of many business lead the people to the unprecedent unemployment level. 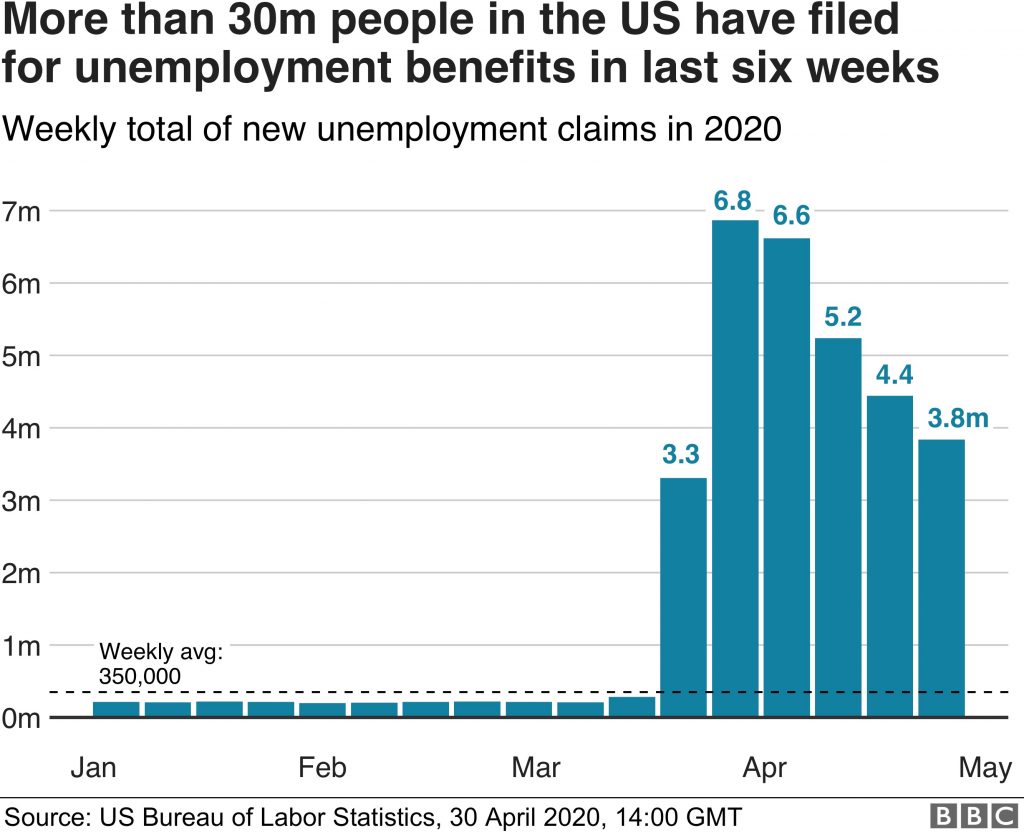 As people locked on their homes and airlines have stopped their operations, it was anticipated that demand for oil dried up. The crude oil prices have been affected by the “oil war” between Russia and Saudi Arabia as they continued produce oil, while there was a lack of demand. Brent crude is the benchmark used by Europe and the rest of the world. Its price dipped below $20, to the lowest level seen in 18 years. In the United States, the price of a barrel of West Texas Intermediate (WTI) turned negative for the first time in history, at minus $37 where sellers would have to pay buyers in order to get the oil out of their hands, as nobody wanted to buy and oil inventories were fully covered. Although OPEC and other countries have now agreed to cut production, the world still has more crude oil than it can use. 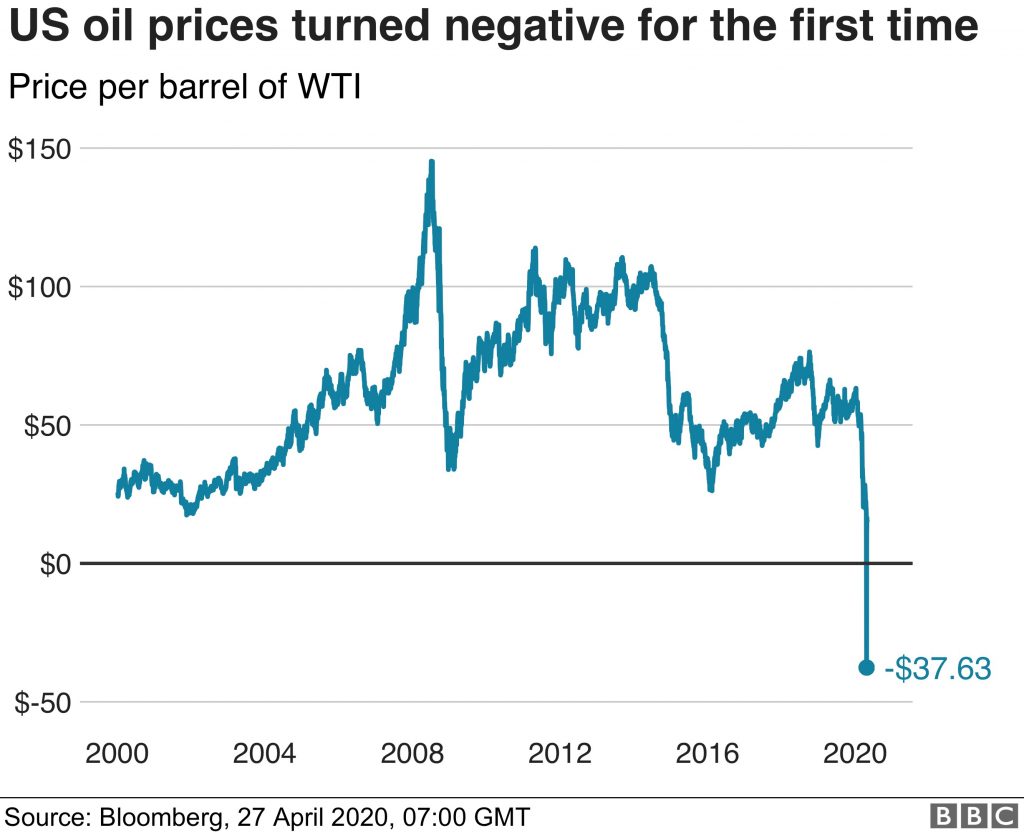 If we take into consideration that if the economy is growing, that generally means more wealth and more new jobs created. This could be used as a measure for percentage changes in Gross Domestic Product, for the value of all goods and services within a country for quarterly time frames or annually performance. According to the International Monetary Fund (IMF) the global economy will shrink by 3% this year. Below it shows an illustration of countries national annual Gross Domestic Product. IMF also noted that the decline is the worst since the Great Depression of the 1930s, and noted that expected global growth is around 5.8% for the next year in case the pandemic fades by second quarter of 2020. 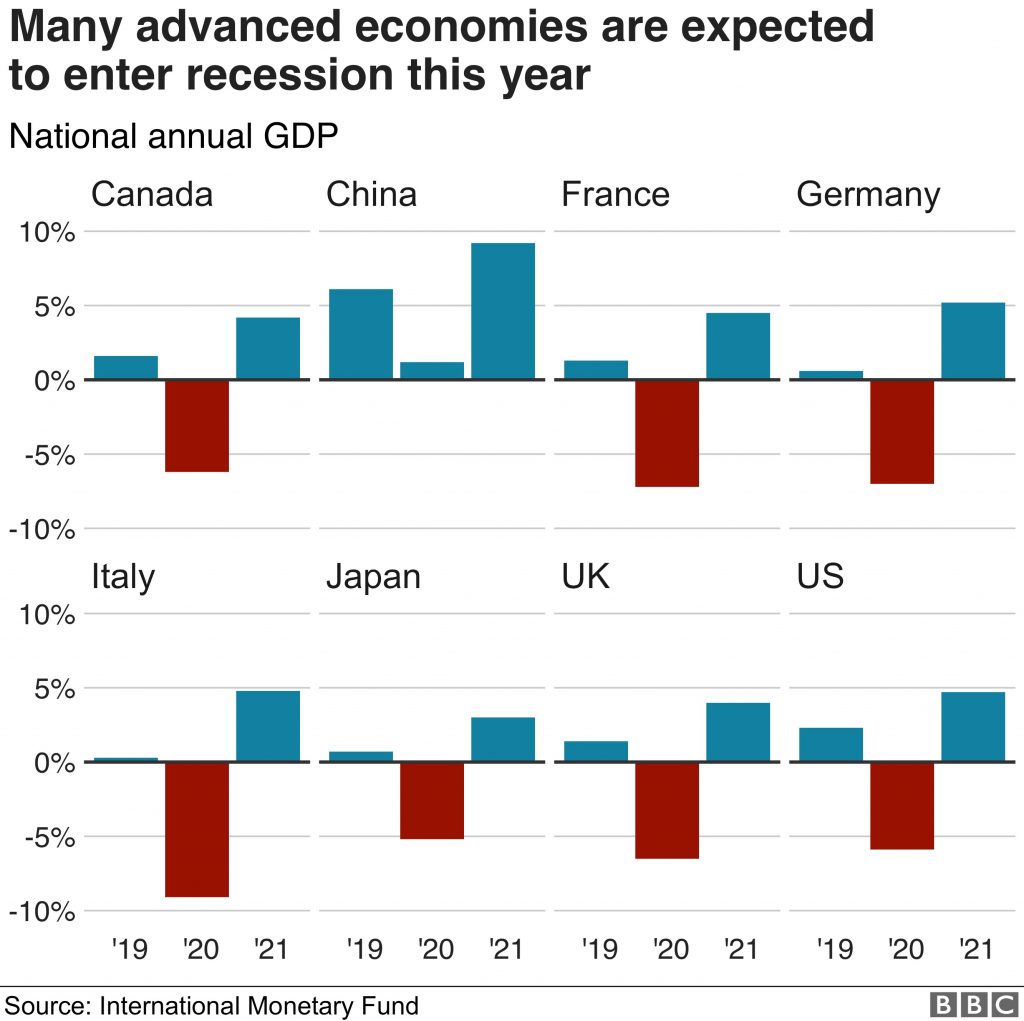 The lockdown measures worldwide forced the majority of employers and employees to work from their homes as per governments instructions. That situation enforced the value of some shares in the technology sector unlike some other types of stocks in the stock market. Shares in technology companies such as Zoom skyrocket as more people relied on video conference calls and email to hold meetings. Additionally, there was an increased demand for online shopping. Amazon’s stock price reached new highs, while Netflix surpassed at one point a more valuable company than oil giant ExxonMobil. 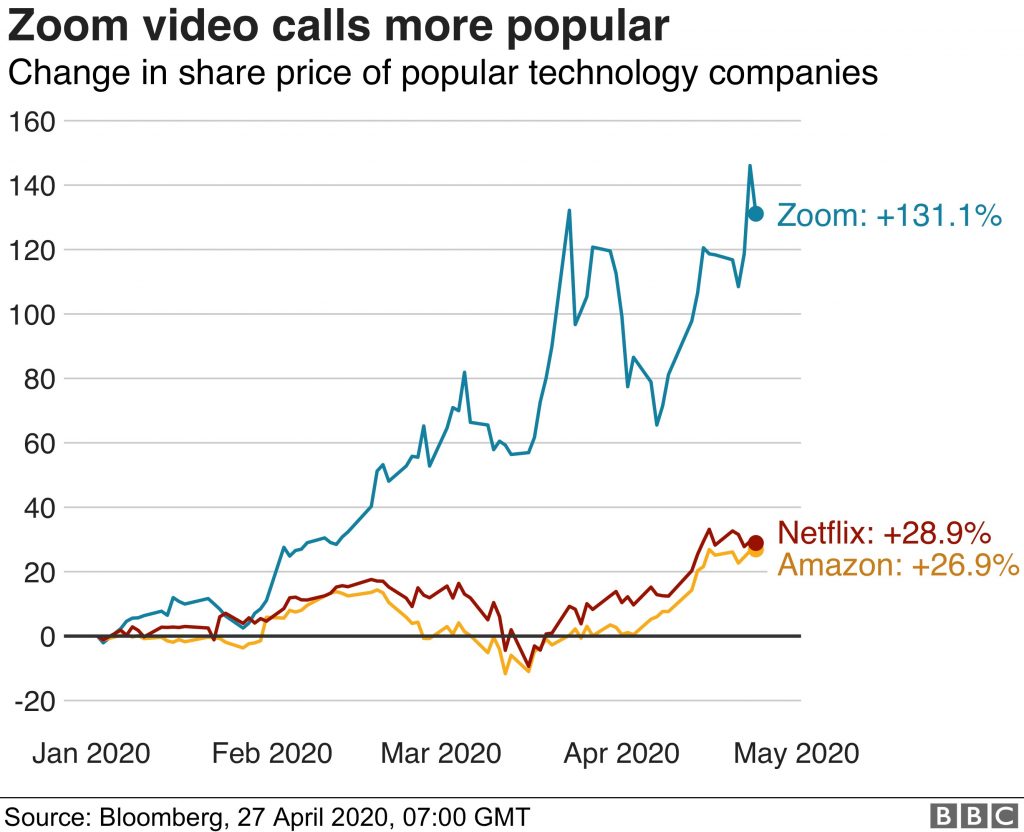 Many billion of dollars have been lost on travel industry, as airlines cancelled many flights alongside with customers cancelling business or holidays trips. Governments have imposed travel restrictions in a way to confront the virus spread. Donald Trump banned flights from Europe to United States for a period of one month during March of 2020. During that period, Boeing company announced that had lost around 13 billion of dollars.  Also, the EU banned travelers from outside the block for 30 days. Below is an illustration from the flight tracking service Flight Radar 24 shows the number of flights globally has taken a huge hit.

Despite that many major industrial production chains have been stopped their operations, as many countries had applied lockdown measures, the effects of the lockdowns are visible. Below is an illustration which shows pollutions clear amid lockdowns. The European Space Agency has registered an impressive fall in pollution. The image below clearly shows how strong reduction in emission is now in place over major cities around Europe. 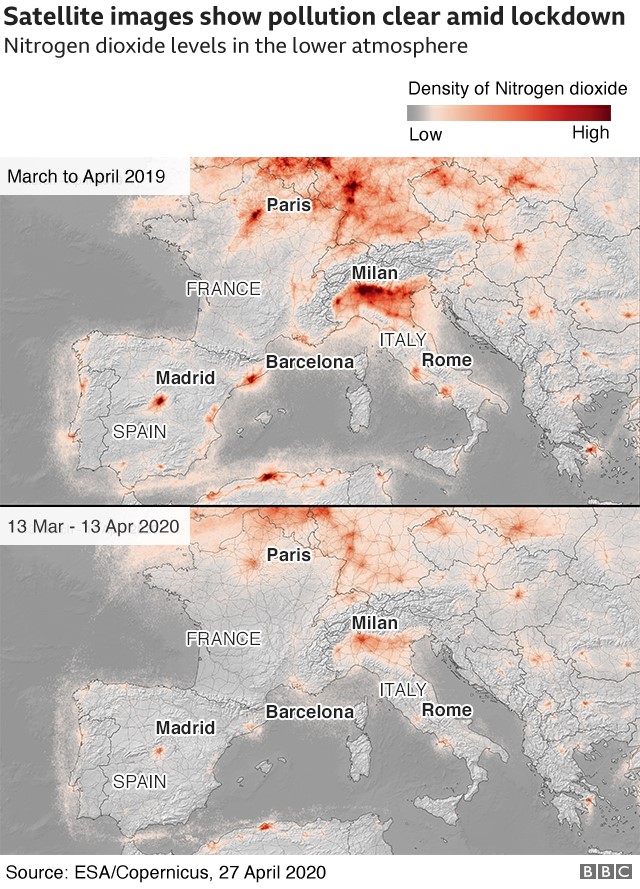 Many factories in China slowed down. In China, where the virus was originated the industrial production, sales and investment dropped in the first quarter of 2020 comparing with the same period a year ago. China accounts for one-third of world production. 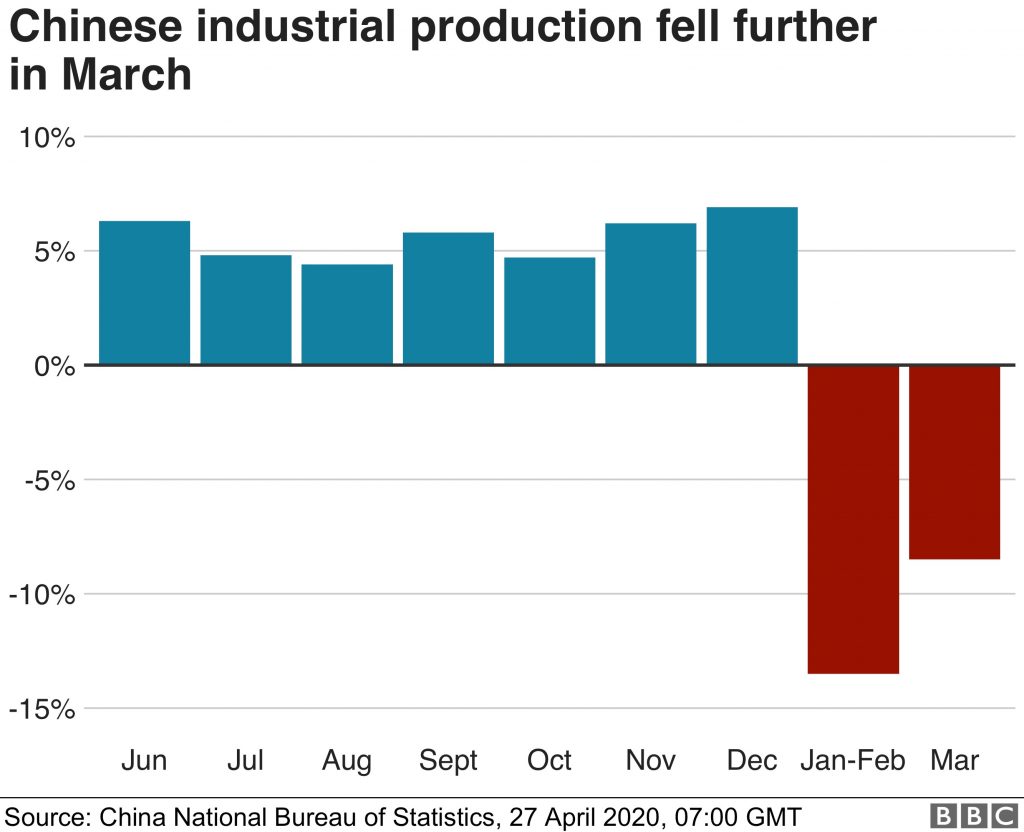 The supply chains were harmed a lot by the global restrictions, as many large companies have been affected, such as industrial equipment maker JCB and car maker Nissan. Shops and car dealerships were damaged as it was anticipated, with many Chinese car sales announced a damage of around 48% during March. Other giant companies such as Tesla or Geely, commenced selling cars online as a new way to increase their operations and confront the virus damages. 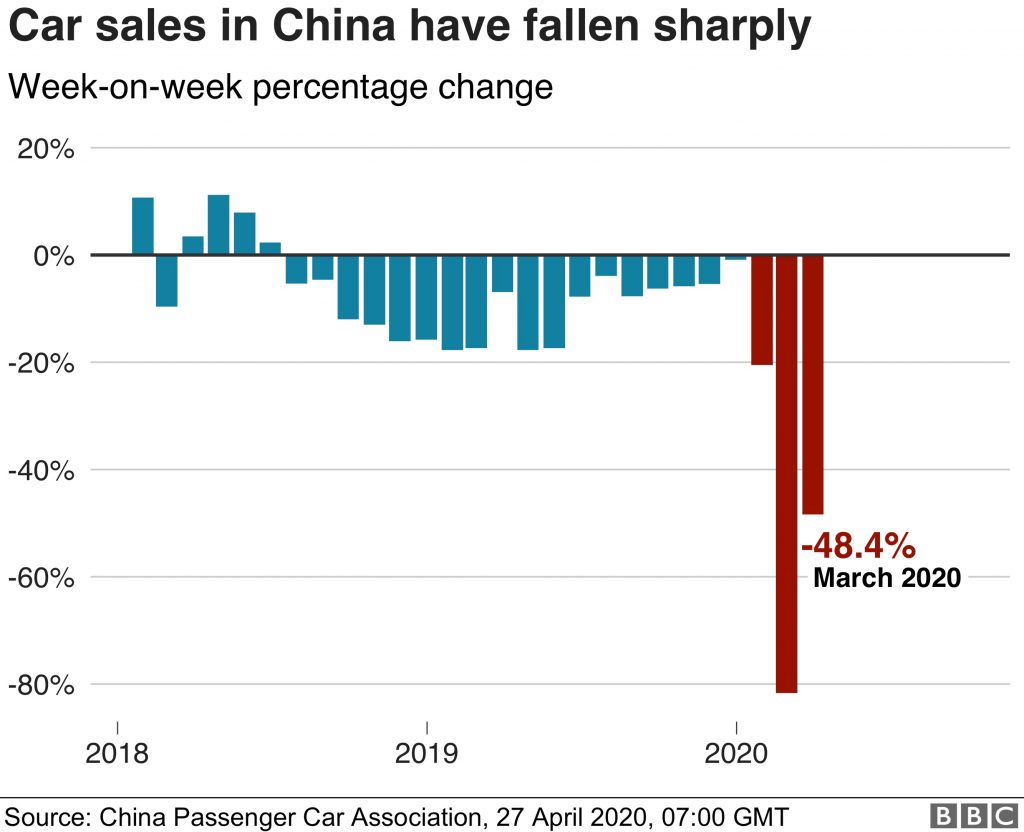 Impressive increase in deposits due to corona: –          With the effects of the pandemic driving the economy into a deep recession, Europeans, fearing difficult days, are saving money, resulting in a dramatic increase in deposits. The savings trend reinforces fears that consumers will not contribute to the recovery of the European economy, as reported by the “FT” in their publication. Deposit growth rates in Europe’s five largest economies rose sharply, above average in March, according to the latest figures from the European Central Bank and the Bank of England.-          In France, deposits rose by almost 20 billion euros in March, far exceeding the long-term monthly average of 3.8 billion euros.-          In Italy – the eurozone’s third-largest economy – ECB data show that Italians set aside 16.8 billion euros in March, an increase also compared to the monthly average of 3.4 billion euros.

It is predicted that a global economic recover to pre-pandemic levels would happen by the end of 2021.

Even with extra levels of monetary and fiscal stimulus relief packages, economists earlier warned that gross domestic product is unlikely to return to its pre-crisis trend until at least the end of next year or by the end of 2022.

While Citigroup saw a global hit of around $5 trillion, JPMorgan Chase estimate the lost output at $5.5 trillion or almost 8% of GDP through the end of 2021 with the cost to developed economies alone seen similar to those witnessed in the recessions of 2008-2009 and 1974-1975.

In many economies the recovery could be even more prolonged, even beyond 2022

The German insurance group Allianz predicts that by the end of 2020, European consumers will deposit an additional 400 billion Euros, an amount equivalent to 3% of the EU economy. Private consumption in most of Europe has fallen by a third, due to lockdowns

The combination of pandemic and lockdown can lead to up to 420 million people living in absolute poverty, living on less than $ 1.90 a day, which will increase the total number of poor people on Earth by two-thirds and will be a decade behind in the fight against poverty.