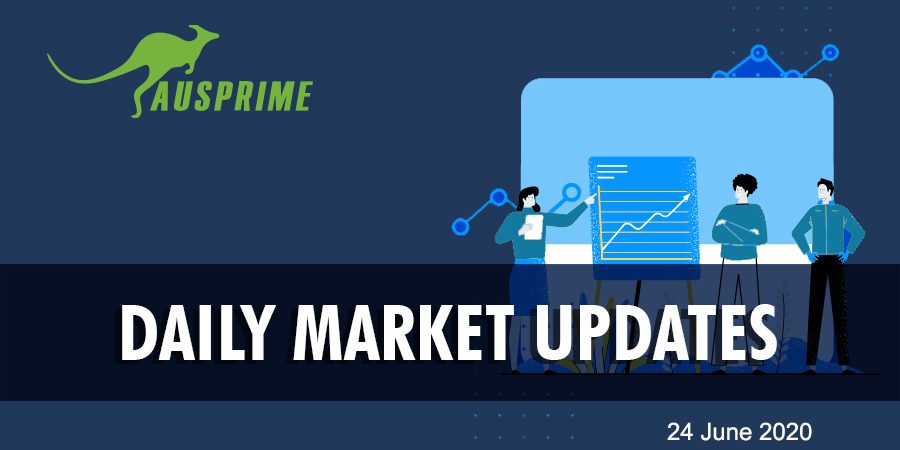 Asian stocks were expected to come under pressure on Wednesday as rising levels of new coronavirus infections affected the climate, although the United States says China’s trade agreement was intact and optimistic economic data provided some reason for optimism. Today Japan’s index is currently losing 0.07%, while Hong Kong’s index declined by 0.16%. Shanghai’s index jumped by 0.27% and South Korea’s Kospi index went up by 1.42%, with shares of index heavyweight Samsung Electronics surging more than 3%.

Dow Jones advanced higher today after yesterday’s narrow trading day, following yesterday Nasdaq’s another high record, amid hopes for a swift economic recovery, along with optimism for a coronavirus vaccine and US and China trade deal fear erased. Another reason stock market went higher is due to better than expected new home sales in May which showed 676k against 640 forecasted. Record-low interest rates and recovering consumer confidence should keep the optimistic housing-market trend alive. Dow Jones rose by 0.5%, while SP500 jumped by 0.4% and Nasdaq index rose by 0.7%.

Stronger than expected Eurozone PMIs data output provided an additional boost to the euro against dollar. The USD downfall came after White House trade advisor Peter Navarro clarified that his comments on the US-China trade agreement had been taken wildly out of context. The US President Donald Trump provided further assurance and tweeted that the phase-one trade deal with China was “still intact”. All eyes turn today to the German IFO survey for June and will determine the course of the pair, which is currently traded near 1.1315. Dollar/Yen developed a remarkably trading pattern. The pair jumped to the highs of 107, after Trump corrected the Navarro comments, but later followed the risk-on correction of the dollar. The pair broke the bottom a short-term consolidation pattern, closing at 106.52, and support now can be found near 106 price level. Dollar depreciation against yen is believed that is linked to Japan’s Softbank currency hedging of its sales of $ 21 billion in value of its holdings in U.S. T-mobile. Pound/Dollar extends pullback from 1.2543 amid a fresh wave of declines Pound seems that is turning down against dollar as it failed to break above 1.253 critical resistance level and now is currently traded near 1.25, with the next support level be found at 1.245. Experts criticize UK PM Johnson’s removal of a two-meter social distance rule.

Gold futures climbed toward their highest settlement in more than seven years Tuesday as low interest rates, U.S.-China tension, and a weakening U.S. dollar provided a runway higher for bullion. Yesterday gold gained another $12 per ounce and today is traded modestly around 1770 price level. On Comex, August delivery on gold futures added $15.60, or 0.8%, to settle at $1,782 an ounce. Gold jumped on the U.S. PMI readings, which showed “a strong rebound that did not top expectations, supporting the idea that fiscal and monetary officials need to keep the stimulus coming,” said Moya market analyst.

WTI futures fell by 0.9% to $40.37 a barrel Tuesday, but they are still up about 20% in the past month and Brent crude futures declined 18 cents to US$42.45 a barrel. Some analysts see $50 as a very real possibility before the end of the year, however The U.S. shale industry is bracing for a wave of bankruptcies as it prepares to write down more than $300 billion in assets. The Energy Information Administration’s (EIA) will report today the oil inventories for the previous week which is forecasted around 300k barrels.