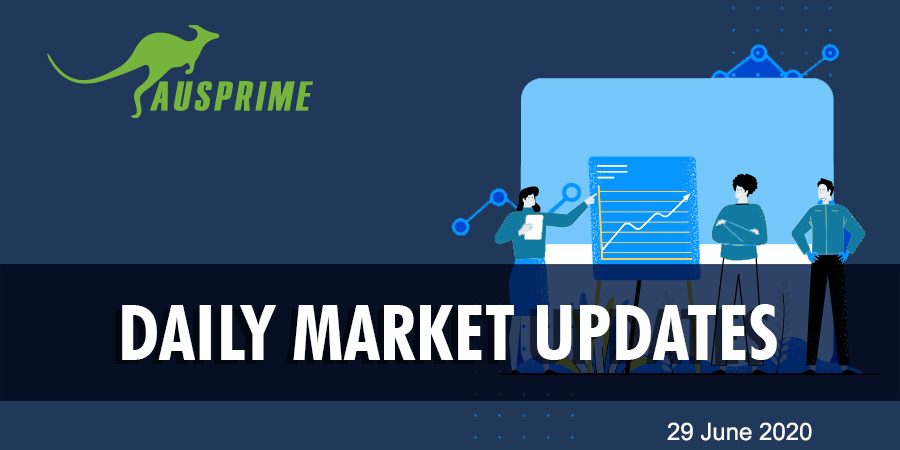 Stocks fell more than 1% in Hong Kong, Japan and Australia due to the increase in virus’ infections. Hong Kong index has some modest decline by 1.31% as the Hong Kong market reopen after two days of holidays. China’s central bank announced that will proceed by implementing new monetary tools to ensure that liquidity is sufficient and said that will increase the proportion of smaller companies, credit and manufacturing loans and continue lowering lending rates. South Korea’s Kospi index tumble by 2% due to that country’s finance minister ruled out another budget for this year, while Shanghai index lost 0.72% and Nikkei index fell by 2.3%.

Futures on US stock market went up and down late yesterday after Dow Jones industrial index plunged more than 700 dollars last Friday. Dow Jones went down by 2.83% after rebounded to positive territory, while SP500 index declined by 2.42% and Nasdaq Composite index fell by 2.59%. It was the worst day for Dow since early June as Covid19 infection cases climb even higher with U.S. recording more than 45,000 cases Friday and this led to prevent some busines to reopen mainly in Florida and Texas.

US Michigan consumer sentiment index last Friday which was slightly lower than it was expected acted as one of the factors that lead euro appreciated against dollar today along with the increased number of infections in America. Euro/Dollar is traded now at 1.126, 40pips already higher for the day. Pound/Dollar is fading the bounce to 1.2390 and now trying to retest the monthly lows of 1.2315, despite the that UK Prime Minister Boris Johnson commented the economic outlook stating that the economy stands resilient to this coronavirus crisis. All eyes now turn on EU-UK Brexit negotiations and their impact in the pair’s future course. The pair is traded in descenting price channel and is under some selling pressure with next support level be around 1.233. Dollar/Yen it seems that is turning down with short position below 107.3 price level with further downside until 106.9, otherwise resistance can be found at 107.65. It is expected that US economy may recover sooner than Japan’s as Japan  rely on exports

There exists a thought that indicates that gold is being manipulated from the Federal Reserve, taking into consideration the unexpected lower prices as crisis exists. Gold is currently traded around $1770 per ounce and continue holding its gains from the end of last week. Support can be found around $1765 including the previous monthly high, the Fibonacci 38.2% one-week and some resistance awaits at $1,779.

Members of the OPEC and group of countries that agreed to decrease oil production since April must continue comply until the end of July. However, some countries that did not comply with oil cuts as they promised will implement deeper reductions in the coming months to offset the shortfalls. Iraq, Nigeria, Angola, and Kazakhstan will collectively deliver an additional 410,000 barrels a day of cuts in August and 660,000 in September. WTI prices of around $40 per barrel will be not yet high to put drilling crews back to work. The price of crude oil falling as investors continued to have concerns about the rising number of coronavirus cases. Brent is trading at $40.16 while WTI is trading at $37.67.

European equities have reversed some Thursdays gains and closed slightly bearish at the end of last week, with Stoxx600 index loosing around 0.39%. Dax30 fell by 0.73% and CAC40 fell by 0.18%. ECB’s President Christine Lagarde said the worst of the coronavirus crisis may be over, but the road ahead would not be easy. “That recovery is going to be incomplete and might be transformational,” she said, during the online Northern Light Summit on Friday, according to CNBC.

UK – EU agree to post-Brexit trade deal extension as the two sides are “still very far apart” on key issues
December 24, 2020
Search
Any Questions?
Please fill in the details below and a representative of our team will get back to you
Go to Top
We use cookies to ensure that we give you the best experience on our website. If you continue to use this site we will assume that you are happy with it. Ok