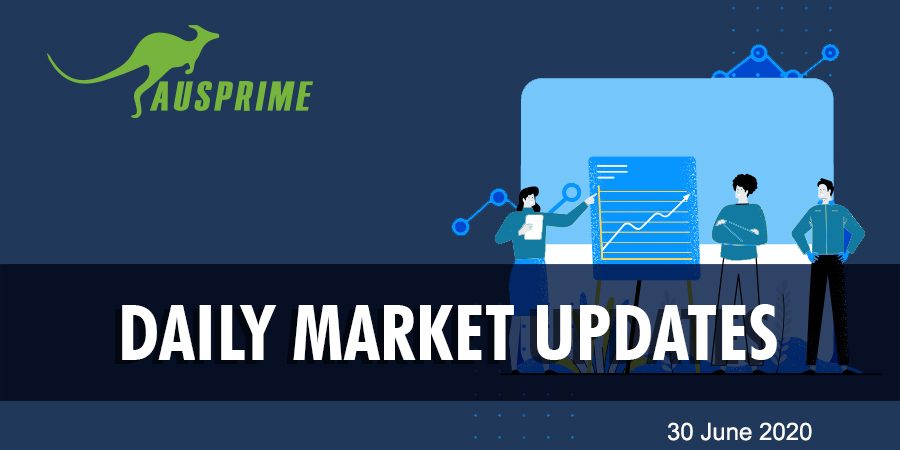 Asian stocks went higher today after the announcement that China’s manufacturing sector grew more than expected during June at the rate of 50.9 against 50.4, an indication that global economy trying to recover. Despite the recent Chinese announcement to passage a new security law that will increase Beijing’s control Hong Kong’s index jumped by 1.18%, while Japan’s index Nikkei rose by 2%, ignoring larger than expected drop in Japanese industrial production. Shanghai’s index advanced higher by 0.75% and South Korea’s Kospi index rose by 1%.

US stocks futures market little changed late yesterday, after Dow Jones rallied of more than 600 points during yesterday, the biggest gain in about three weeks. Dow rose up by 580.25 points, or 2.3%, while The SP500 index advanced higher 44.19 points, or 1.5%, and the Nasdaq Composite Index, jumped by 116.93 points, or 1.2%. Despite the rising virus cases, stocks seem that will jump higher until the end of June. Investors were positive after a report showed that pending home sales in May spiked 44.3% against April data. Fed Chairman Jerome Powell yesterday noted that the outlook of Us economy is “extraordinarily uncertain” and signalled more monetary stimulus may be necessary.

The euro was lowering against dollar yesterday, reversing earlier gains after a strong weekly opening. The pair reached the level of 1.1280 before pulling back again to 1.1230 due to dollar strengthen which caused by better than expected US macroeconomics data. All eyes turn to Eurozone inflation release today by Eurostat for June and the Consumer Price Index which is anticipated to be stable at 0.1%YoY. We observed a volatile session in the British pound yesterday, despite initial rise from 1.2327 to an intra-day high at 1.2389 at European open, price erased its gains and tumbled to a one month at 1.2252. The weakness in pound came from fears of a hard Brexit as the fifth round of negotiations between EU and UK begin. Japan’s Industrial Production joined downbeat employment data for May and market sentiment remains mildly positive following recent upbeat US data. On Dollar/Yen long positions are above 107.45 with targets at 107.90 and 108.25, otherwise below 107.45 further downside is seen, with 107.25 and 107.00 as targets.

The upward movement in gold market justifies the seriousness of the increased number of new coronavirus cases. “Lingering risks across the global risk markets and sliding sovereign yields continue pushing capital into gold,” wrote Ipek Ozkardeskaya, senior analyst at Swissquote Bank, in a Monday research note. Against the backdrop, August futures on gold, rose 90 cents, or 0.05%, to settle at $1,781.20 per ounce, after gold saw an advance of 1.6% last week. Gold is currently traded at $1772 per ounce and it is expected to rise as investors awaiting today to listen US Fed Chair Powell for insights into future monetary policy amid the fresh outbreak of coronavirus cases.

From a significant contango market behaviour in April, the Brent Crude futures curve has flattened and flipped to backwardation for the nearest months, wiping out the most important incentive for trading houses to gain profit from the price movements when oil demand crashes. OPEC’s Oil supply has fallen by 1.25 million barrels per day during June from May’s level, as Reuters reported yesterday. OPEC, excluding Libya, Iran, and Venezuela, needs to cut an additional 1.55 million bpd to reach full compliance with the OPEC+ output reduction agreement, Reuters further noted. Ex-BP CEO Bob Dudley’s said that “oil must be sustained at $60 per barrel for US output to rise.” WTI is currently traded at $39.3, while Brent is traded at $41.52 per barrel.

European stock markets were mixed today and investors waiting for further sign of an economic recovery in China. The pan-European Stoxx600 rose slightly by 0.1%, with technology stocks adding 0.7% to lead gains while media and oil and gas stocks dropped by 0.5%.