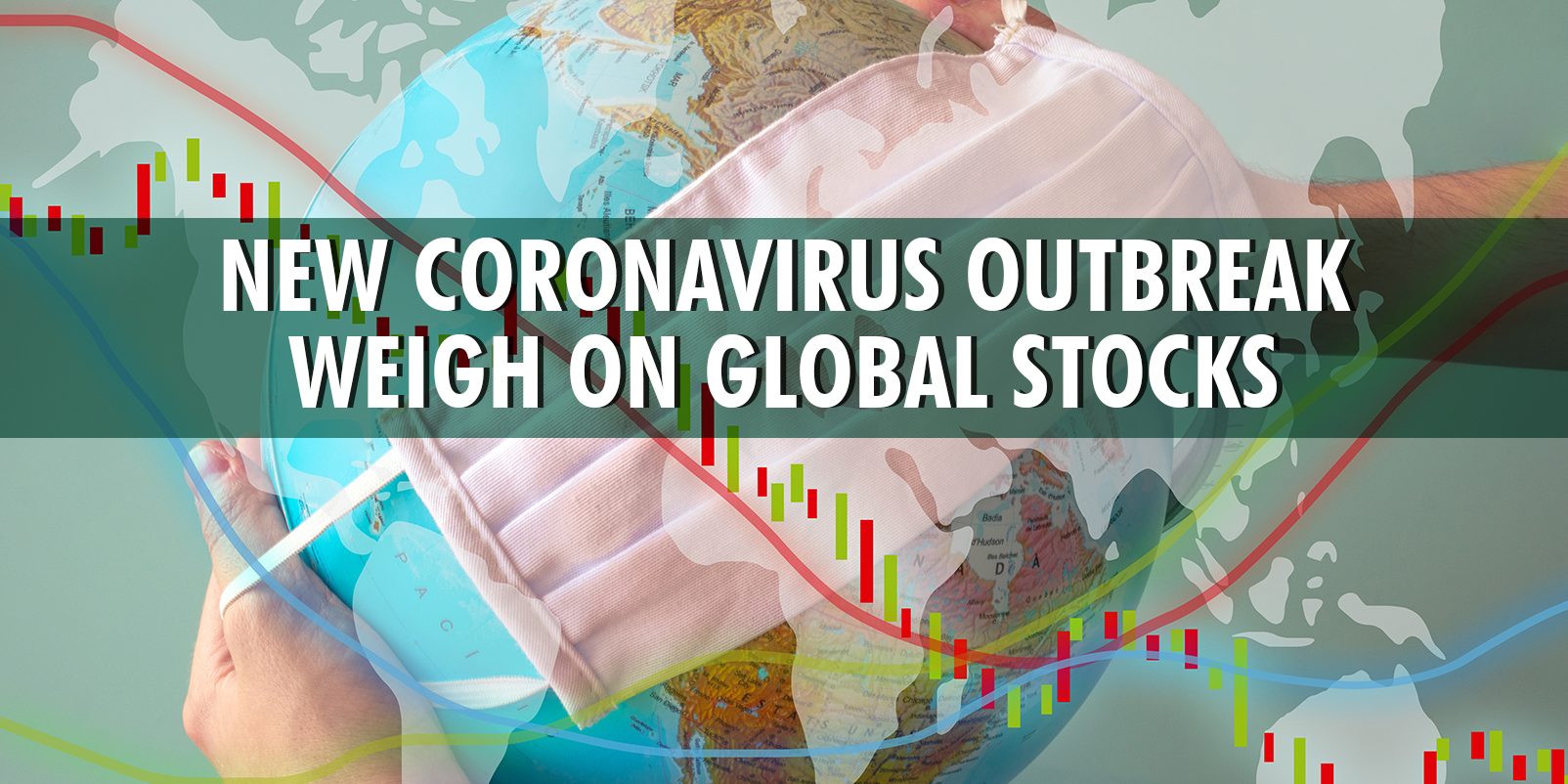 US markets – The upbeat momentum ended beginning of last week for US stocks equities, despite that Fed is continuously buying corporate bonds along with record Us retail sales lifted sentiment. The new global coronavirus cases reached a record high by 183,000 in a single day as the World Health Organization announced causing a modest market. Despite the possibility of another shock in the stock market from a second wave of the virus, US stocks have been traded higher later in the week. We observed Nasdaq’s another high record, amid hopes for a swift economic recovery, along with optimism for a coronavirus vaccine and US and China trade deal fear erased. Another reason stock market went higher is due to better than expected new home sales in May which showed 676k against 640 forecasted. Record-low interest rates and recovering consumer confidence should keep the optimistic housing-market trend alive. Near at week’s closing stocks tumbled as investors still worried about the increasing number of the virus infections and that government may reinstate lockdown measures. Since 10 of June we observed another sell off in the equities markets and is not impossible to continue go back again to those record dips, if a second wave comes up. At week’s closing Fed announced the latest stress test, noting that the prolonged economic recession could saddle the biggest US banks with up to $700 billion losses on soured loans and Fed ordered the banks to cap dividends and to suspend share buybacks to sustain the funds. U.S. record more than 45,000 cases in Friday and this led to prevent some busines to reopen mainly in Florida and Texas.

Some factors that might contribute to the lack of equities investor’s confidence to invest due to pandemic expansion: Rising infections and hospitalizations of the virus cases, Economic surprises from the U.S. Labor Department’s monthly jobs report during this week, Quarter-end and month-end rebalancing of portfolios by pensions and mutual funds, postponed plans for further economic stimulus from Congress, Joe Biden’s lead in presidential polls, Market technicals used by some investors as decision-making tools and a Low stock market volumes in a holiday-shortened week ahead of the July Fourth to be observed on Friday.

Perspectives: Investors are expecting the Labor Department’s monthly jobs report, which will be released this Thursday. The May report showed a surprising 2.5 million jobs added, confounding expectations for another big decline and, perhaps, raising the expectations for a big bounce next week. The average estimate of economists surveyed by MarketWatch is for 3 million jobs to be added in June and the unemployment rate to fall again to 12% from 13.3%. 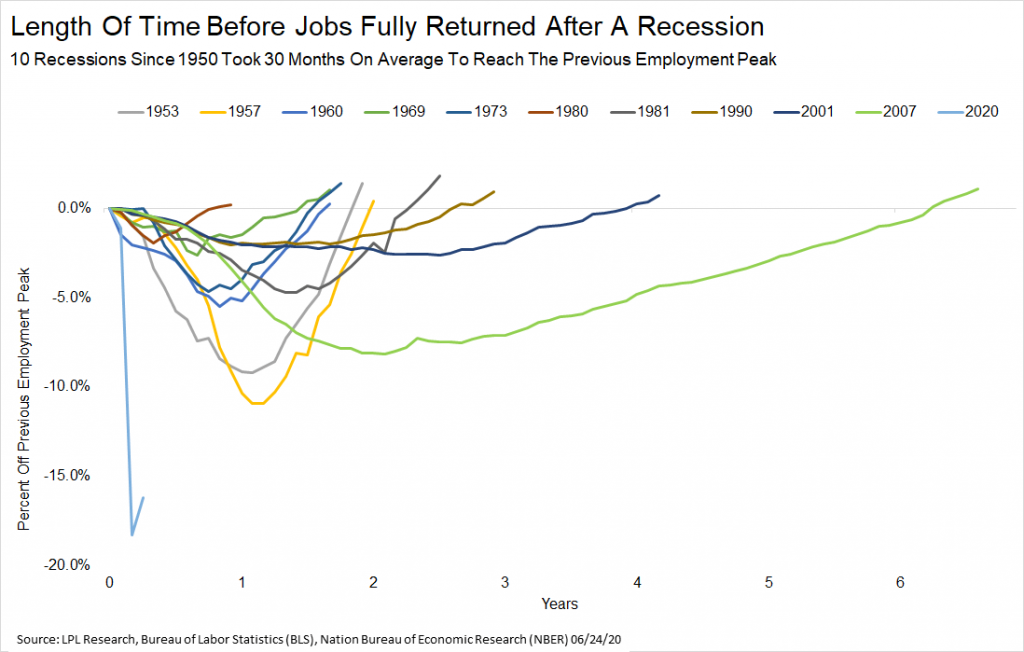 Asian – Alongside with US, China also faces an increased number of new coronavirus cased with the possibility of a second wave to be obvious. Last week China decided to leave unchanged its lending rate with 1-year loan prime rate at 3.85% and the 5-year loan prime also remained unchanged at 4.65%. Asian equities print modest gains later on the week, as the recent volatility receded after Trump confirmed that the Sino American deal is not over yet. Thursday equities in Asia Pacific slipped away after the International Monetary Fund’s (IMF) forecast in its World Economic Outlook update and estimated that we will see a contraction of 4.9% in global GDP this year lower than the 3% as it was predicted the previous months. Closing of last week Asian equities gained after US banks stress test results, following the gains of the US stock market as US regulators removed some limits on banks’ ability to make investments as a measure to confront the crisis. This week China’s central bank announced that will proceed by implementing new monetary tools to ensure that liquidity is sufficient and said that will increase the proportion of smaller companies, credit and manufacturing loans and continue lowering lending rates.

European Markets – European stocks opened beginning of last week lower as it was expected by 0.15%, along with US equities as investors reacted in growing concerns over a rise in infections globally and in Germany as well. European stocks were expected to be opened higher later on the week as they did, despite some worries over the state of the US and China trade deal and a surge of coronavirus cases. Positive data output for the Eurozone came later in the week with the EU Manufacturing PMI rising from 39.4 to 46.9, the Services PMI increasing from 30.5 to 47.3 and Composite PMI came in at 47.5, which was up from a May 31.9 and ahead of a forecasted 42.4. Near the end of the week EU equities commenced falling after the US announced that is set to impose renewal tariffs on European goods and at the same time the number of the virus’s victims continues to surge. The week closed well after ECB announced a new repo facility program, yesterday and announced that will offer collateralized EUR loans to central banks outside of the Eurozone. ECB’s President Christine Lagarde said the worst of the coronavirus crisis may be over, but the road ahead would not be easy. “That recovery is going to be incomplete and might be transformational,” she said, during the online Northern Light Summit on Friday, according to CNBC.

Gold Market – Although the bullish sentiment in the gold market last week, some analysts noted that the precious metal might not have enough steam to break through its months-long trading range. According to Reuters most private banks usually advise clients to hold up to 10% of their portfolio in gold. Gold futures prices for August delivery jumped by 1.5% later on the week to $1779 per ounce reaching the highest level in nearly eight years as coronavirus infections increased. Gold is currently traded by 15% higher year-to-date as low interest rates, U.S. – China tension, and a weakening U.S. dollar provided a runway higher for bullion. Gold has jumped on the U.S. PMI readings, which showed “a strong rebound that did not top expectations, supporting the idea that fiscal and monetary officials need to keep the stimulus coming,” said Moya market analyst. In an editorial article published by Forbes, contributor Naeem Aslam cited five key reasons that are likely to drive Gold prices higher in the coming days. The possible second wave of the virus, the possible new tariffs on Europe of $1.3 billion as Trump noted, the fragile US and China trade war, the US Unemployment jobless claims and uncertain earning season for companies are main reasons why gold may explode higher. There exists a thought which indicates that gold is being manipulated from the Federal Reserve, taking into consideration the unexpected lower prices after crisis came, however bulls holds the price at high levels.

Oil Market – Oil prices nudged higher at the commencement of last week on tighter supplies from major producers but there are concerns for limited recovery in oil demand after record high of new virus infections. With oil prices having rallied up to the $40 mark, some analysts have come out with bullish forecasts for the near-term. In the very short term, money managers and hedge funds sold off some of their bullish bets when oil hit $40. Despite that Oil price find it difficult to surpass the level of $40 is still up about more than 20% from the record dips and according with CME Group volume went up remarkably by around 294.1k contracts  Some analysts see $50 as a very real possibility before the end of the year, however The U.S. shale industry is bracing for a wave of bankruptcies as it prepares to write down more than $300 billion in assets. US Crude Oil inventories increased by 1.4 million barrels in the week ending June 19th, the Energy Information Administration (EIA) announced last week which it was far worse than what was expected as a result oil fell by almost $2 per barrel. By the end of the week US crude Oil demand increased after an increase in US durable goods orders and the lower than expected unemployment which shows that the US economy is on track to recovery. Members of the OPEC and group of countries that agreed to decrease oil production since April must continue comply until the end of July. However, some countries that did not comply with oil cuts as they promised will implement deeper reductions in the coming months to offset the shortfalls. Iraq, Nigeria, Angola, and Kazakhstan will collectively deliver an additional 410,000 barrels a day of cuts in August and 660,000 in September. WTI prices of around $40 per barrel will be not yet high to put drilling crews back to work. The price of crude oil falling as investors continued to have concerns about the rising number of coronavirus cases.

Foreign Currencies – The preliminary PMIs and the German IFO survey of last week provided further details regarding the strength of the recovery in the euro area and supported the euro against dollar. Euro appreciation was caused also from today’s German Manufacturing PMI which showed rate of 44.6 in June against 41.5 that was expected. Euro/Dollar has moved higher over the last month, trades near the 1.13 level, as global risk sentiment has improved and economists at Danske Bank see the pair at 1.15 on a one-to-three-month horizon. Euro was also supported from the phase one deal with US – China which is still intact. US Michigan consumer sentiment index was lower than expected at last week’s closing and acted as one of the factors that led euro appreciate against dollar commencing by this week along with the increased number of infections in America. Strategists at OCBC Bank see a clear path for Pound/Dollar towards 1.2076 as there are few supports to limit the slide. The lack of progress on the EU-UK Brexit trade talks and the heavy economic prints continue to impart downside pressure on the cable. Last week many experts criticize UK PM Johnson’s removal of a two-meter social distance rule which later result to pound’s fall. Pound remained vulnerable against dollar after Trump’s announcement that will impose tariffs of $1.3 billion of imports from UK and EU. Meanwhile, the final version of the GDP report confirmed that the US economy contracted by 5% annualized pace during the first quarter of 2020 as it was expected and did not influenced that much the dollar against it’s majors counters and pound. Pound/Dollar this week is fading the bounce to 1.2390 and now trying to retest the monthly lows of 1.2315, despite the that UK Prime Minister Boris Johnson commented the economic outlook stating that the economy stands resilient to this coronavirus crisis. All eyes now turn on EU-UK Brexit negotiations and their impact in the pair’s future course. Last week dollar continued depreciating against yen as the threat of second wave of virus is still there, however yen retreated after President Donald Trump said that the US-China trade deal is intact. Dollar depreciation against yen is believed that is linked to Japan’s Softbank currency hedging of its sales of $ 21 billion in value of its holdings in U.S. T-Mobile. At the closing of the last week dollar edged lower against yen, however a pickup in the US bond yields provide some support to the dollar aiding to limit the slide. Despite that dollar seems to be weaker than yen it is expected that US economy may recover sooner than Japan’s as Japan relies mainly on exports.