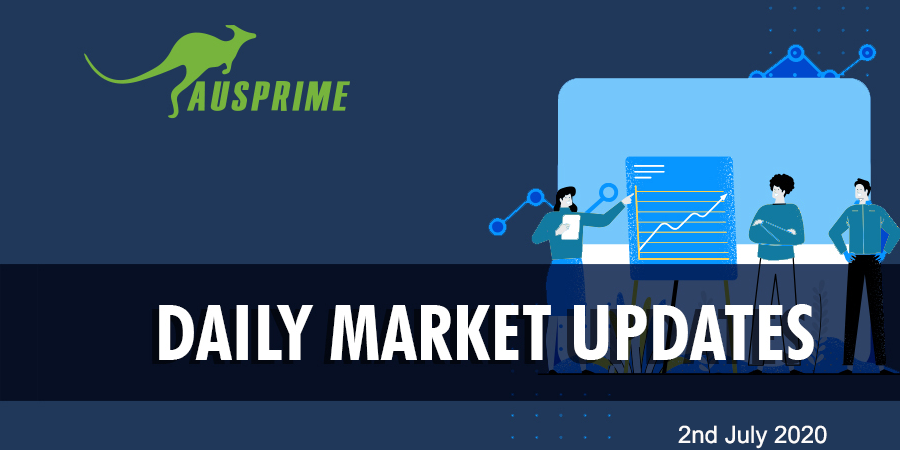 Asian futures on equities rose along with US stocks today after positive vaccine developments and U.S. data tempered concern over a jump in coronavirus cases. The Japanese index Nikkei lost about 0.8%, while South Korea’s Kospi index finished the session 0.1% lower and the Shanghai Composite Index SHCOMP, advanced by 1.4%. Despite the recent tensions over China’s new national security law over the city, Hong Kong’s index rose by 1.91%.

US equities were mixed yesterday with Dow Jones finishing the day lower, while Nasdaq hit a new record high, as investors mainly focus on signs of economic recovery from the virus. Despite blue-chip Dow ended lower, its biggest gainer was Pfizer Inc by 3.18% which reported positive results for a new vaccine. Fed in its yesterday FOMC meeting voted to hold the short term borrowing between 0%-0.25% as promised in early June until at least 2020 and their aim is to focus on the inflation rate rather than unemployment rate. The Dow Jones fell buy 0.3%, while SP500 and Nasdaq gained 0.5% and 1% respectively. The median GDP projection from Fed was about 6.5% contraction, followed by an increase of 5% in 2021 and 3.5% the following year.

Pound/Dollar gained some strong follow-through traction on Wednesday amid renewed USD selling. All eyes now turn on NFP report and US unemployment. The UK Manufacturing PMI news yesterday did little to provide any meaningful impetus to the British Pound. Psychological level for Pound against dollar remains at 1.25. Euro sustained above 1.12 price level against dollar. Dollar’s major counters appreciating amid positive news of  COVID-19 vaccine and led dollar in some selling pressure and the focus now shifts to the US NFP report. The final German and EU Manufacturing PMI for June were revised higher, albeit did little to provide any meaningful impetus to the currency. The US ADP report yesterday showed that private sector employment rose by 2369K in June against below 3000K forecast. Dollar/Yen could edge higher and re-visit the 108.40 region in the next weeks, noted FX Strategists at UOB Group. Due to positive US Automatic Data Processing (ADP) employment dollar found support after tumbled from yesterday’s Asian high at 108.16 to 107.37. Offers are now seen at 107.50 and move above at 106.70.

August gold futures are currently losing -0.16% and yesterday lost $20.60, or 1.1%, to finish at $1,779.90 per ounce. Reuters reported that record-high gold prices and coronavirus pandemic-imposed closure of international air travel led to an 86% plunge in India’s black gold imports in June. The world’s second-biggest consumer of the precious metal imported around 11 tonnes of gold in June, down from 77.73 tonnes a year ago. Gold prices yesterday closed at $1767 per ounce and now is traded at $1768 per ounce losing 0.12%, however gold is up 18% year to date.

Saudi Arabia threatened that will begin an Oil war again unless OPEC members comply with Oil production cuts. Saudi Energy Minister asked Angola and Nigeria to submit detailed pledges to carry extra oil production curbs to West Texas Intermediate U.S. crude Oil gained 55 cents, or 1.4% for August futures delivery and settled at $39.82 per barrel on the NYMEX. Oil price increased as US inventories fell by 7.195 million barrels against 710K barrels forecasted. Citigroup analysts think oil may never return to $100 level and that oil is more likely to be at $45 than $60 a barrel in the long-term. WTI price now representing already 300% since April.

In European equities, the Pan-European index Stoxx600 index which is currently up by 0.23% and yesterday closed by 0.2% and London’s FTSE 100 UKX, retreated to end 0.2% lower. German unemployment data yesterday showed 627,000 people filed in May, a 48.5% gain on the year-ago period, as the Ifo Institute predicted a slow recovery for the economy and also this caused amid news that pan-European aerospace giant Airbus, plans to dismiss 15,000 employees.