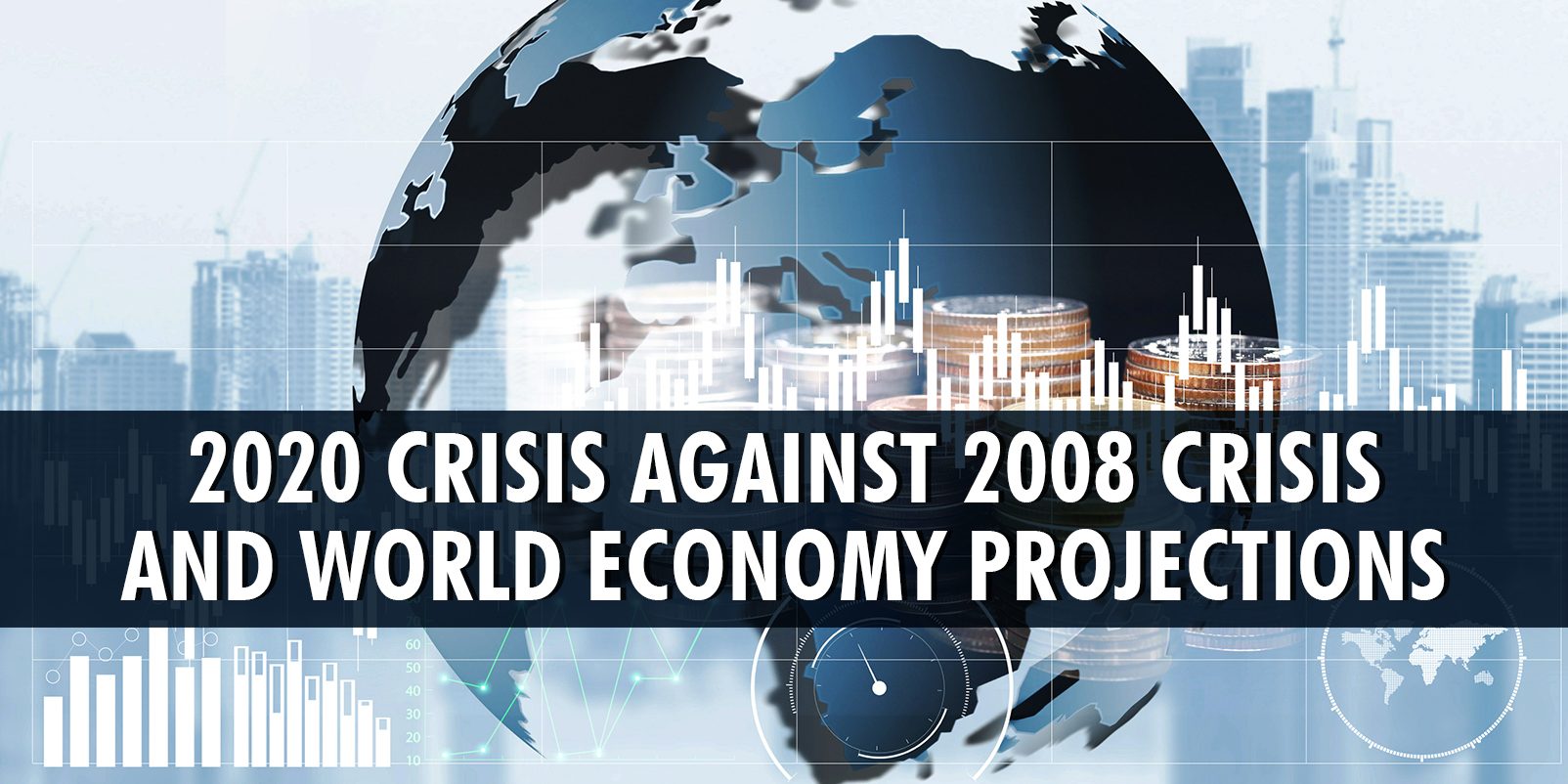 The International Monetary Fund (IMF) has published its World Economic projections and outlook for both 2020, 2021. The global economy it is predicted to contract sharply by 3% within 2020, which presents much worse than 2008-2009 financial crisis and this is due to coronavirus pandemic. Specifically, the US economy is projected to plunged by 5.9%, while the Eurozone area is anticipated to shrink by 7.5%, 1.6% more than US economy and China will grow at a measly 1.2%.

Comparing the pandemic crisis, with what happened back in 2009 crisis, global activity was projected to contract by 1.3% in 2009 and growth was projected to reemerge in 2010, but at 1.9%. What actually happened over the next two years? Global GDP did contract in 2009 but by 0.7 percent, half the rate predicted by the IMF. In 2010, it grew by a whopping 5.1 %. The U.S. economy ended up growing by 3 percent instead of the forecasted zero number, Germany’s economy also did well by 3.5 % instead of shrinking by one percent, and Japan by 4 % instead of -0.5 %. China and India did way better than what has been forecasted.

IMF economists expressed their beliefs that, in a baseline scenario which supposes that the pandemic fades in the second quarter of 2020 and containment efforts can be gradually unwound, the global economy is projected to grow by 5.8% during 2021 as economic activity normalizes, helped by policy support. Coincidently, the U.S. economy is expected to grow by about the same rate. The IMF’s economists are likely to be more accurate this time though they may be exaggerating the 2020 contraction. They also noted that the growth outcomes are much worse than ever before, however they believe that we will overcome this challenge. The IMF’s chief economist warned that this time is different and Kristalina Georgieva, the managing director of the IMF, said that we anticipate the worst economic fallout since the Great Depression.  She also mentioned that just three months earlier positive per capital income growth was expected in over 160 of IMF’s member countries and this number today turned as now over 170 countries will experience negative per capital income growth until the end of the year. These warnings are mild compared to those from the organization for economic cooperation and development (OECD) as OECD warned advanced economies that they should be prepared to suffer and if they did everything the suffering would last an year, otherwise may never recover.

Angel Gurria, the OECD’s secretary-general did not agree totally with the idea of a “V” shaped phenomenon where prices rose sharply to the upside back to a previous peak after a sharp decline in the market, and he believes more to the “U” case where there is longer period of time of a recession before it gets to the recovery period. If we take into consideration a possibility of a second wave of coronavirus this creates a lot of uncertainty in the markets and unprecedented market reaction.

How did the World Bank do back in 2009 and what are its economists saying today? It is not so easy to compare the global forecast for 2009 of the World Bank with those forecasts of IMF, because it publishes it’s forecasts in January and June. The table below shows the World’s Bank’s economic predictions for January 2010 and January. 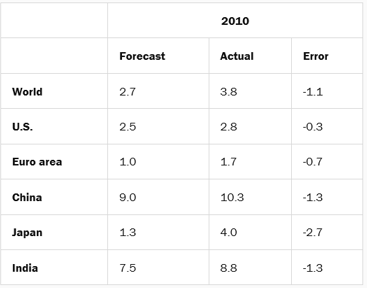 Based on a quick review of the forecasts by the OECD, IMF and the World Bank in regards to previous crisis, it is expected that Mr. Gurria and other doomsayers to be wrong. The World’s Bank Group’s David Malpass said in recent announcement that they aim to provide support during the pandemic according to each country’s needs and they definitely must shorten the time to recovery to create confidence. Additionally, he stated that official bilateral creditors should suspend debt payments due from International Development Association (IDA) countries, effective immediately. This would allow time to assess the crisis’s impact and financing needs for each IDA country, and to determine what kind of debt relief or restructuring is needed. He also noted that “This time is different”. The virus has hit economies across the world almost simultaneously, and all countries are suffering with demand and supply shock. The Great Recession was one shock, though to a large country (the US). Oppositely, the COVID-19 is a shock of demand and supply to all the countries hit by the virus such as China, East Asia, the United States, Western Europe, and the Middle East. Even if the restriction measures are restricted to say two quarters, there is a possibility that annual global Gross Domestic Product growth will be negative for the first time in decades.

It was deemed impossible for global GDP to shrink in 2020 for “the first time in decades” because it shrunk long ago for the first time in decades back in 2009. The importance for the governments, IMF, World Bank and the OECD is whether the policy related reasons and responses to this current recession are different from previous crisis and the answer is that they are almost the same.

Nowadays most governments tend to respond reasonably well, and that’s why economic crises tend to have a V shape with quick recovery, however it takes longer for the economic recovery to remain stable. Worth noted that the US and Chinese economies were performing better than Eurozone last year and will recover sooner and most probably will do the same by 2021.

As International Monetary Fund announced it has $1 trillion in lending capacity and responded to an unprecedended number of calls for emergency financing from over 90 countries so far. Advanced economies entered this crisis with interest rates at historical lows and public debts, on average, higher than they had been over the past 60 years. They will come out from the crisis with even higher public debts. The IMF’s executive Board has gained double access to emergency facilities. 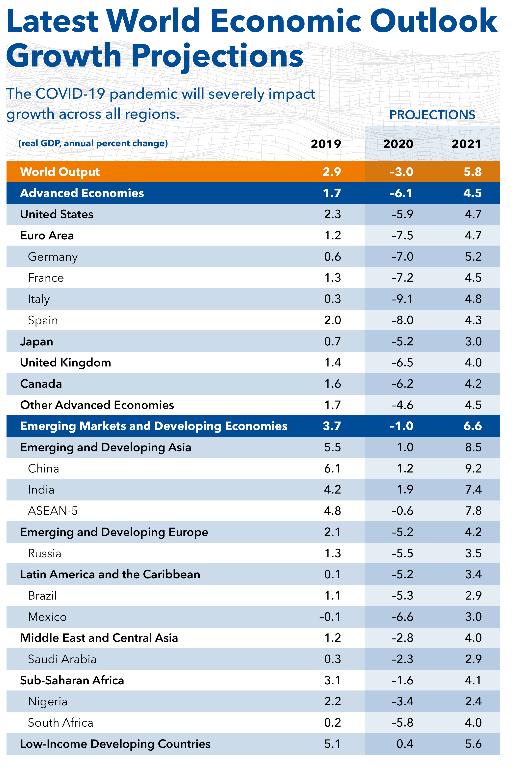