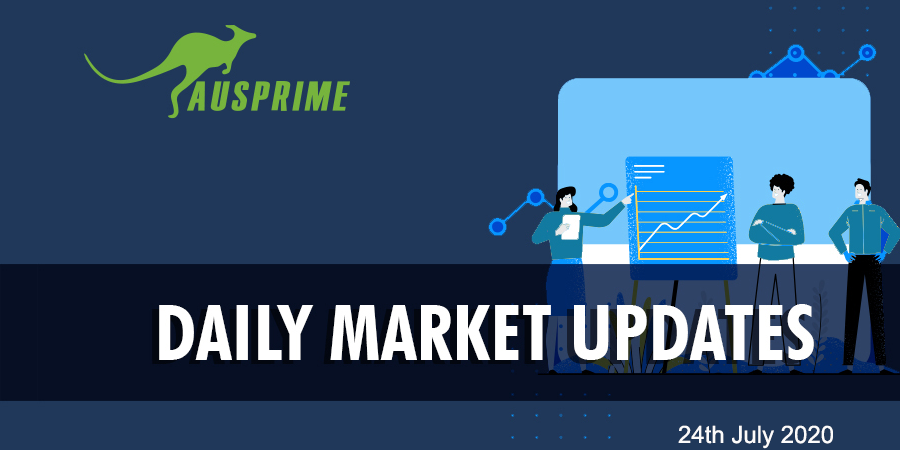 Technology equities in mainland China are down today more than 2% following US tech stocks, amid increased tensions between Us-China. Hong Kong’s index fell by 1.9%, while the Shanghai’s index sank by 2.3%. South Korea’s Kospi index declined by 0.6%. On Friday, China requested the U.S. consulate in the western city of Chengdu to be closed, in retaliation for the U.S. closure of the Chinese consulate in Houston following allegations of spying.

US stocks indexes fell violently to the downside yesterday, with technology stocks giants such Apple and Microsoft losing more than 4% and around 27% of SP500. The drop of those stocks accounted for more than half of Dow’s losses, as investors became pessimistic about employment, along with concerns that Congress may not provide further stimulus package due to political controversies. Dow Jones closed 1.3% lower, while SP500 fell by 1.2% and Nasdaq index fell by 2.3%. For equity bulls, a much-needed boost may arrive early next week with Senate Republicans set to unveil their proposal for a $1 trillion stimulus plan.

Euro has much appreciated against dollar during this week and is being supported by the European recovery fund of 750 billion agreement. Euro continued rising yesterday, after a weekly report on initial jobless benefits claims which showed its first increase in weeks. The Labor Department data showed 1.42 million US citizens filed for first-time benefits, a rise of 109k and the first rise of those seeking benefits since late March. Very narrow trading observed on Pound/Dollar the last three days with major resistance level be at 1.274 where it is currently traded. The British pound remained relatively stable after the fifth round of Brexit negotiations ended with no deal in sight. Today’s UK retail sales and PMI reports for July may lead sterling go towards 1.282 next resistance level. The UK retail sales came in at +13.9% over the month in June against +8.0% expected and +12.0% previous and on an annualized basis, the UK retail sales stood at -1.6% in June versus -6.4% expected. Markit’s preliminary Purchasing Managers’ Indexes for July will likely show ongoing improvement in sentiment as Britain is getting the virus under control. Dollar is losing traction against yen today by falling more than 40 pips after it has been traded on sideways for two weeks. Price met renewed selling at 107.22 n dropped to 106.72 in NY afternoon due to fall in U.S. stocks n yields. Dollar/Yen was quiet around the low 107s until risk aversion spiked and sent the yen higher.

Yesterday gold price sored to $1905 per ounce slightly below the all-time high of $1920. Investors reacted positively after the announcement from Mark Mobius a veteran on emerging markets that a bullish momentum will continue. The veteran said that the price will continue to rise because of negative real rates, a weaker US dollar, and the recent geopolitical issues. In a statement, analysts at UBS upgraded their target to $2,000 while those at Bank of America expects it to reach $3,000.

Crude Oil prices declined almost $1 per barrel in yesterday’s trading session and continue traded slightly lower today by 0.15% after hitting $42 per barrel strong resistance level and this signalled some short weakness is ahead. The COVID-19 is obviously the main issue as travel restrictions remain in place in certain parts of the world but adding trade tensions to the mix could really be problematic. The OPEC Oil output cuts have helped the situation dramatically. OPEC second phase of further cut which is 2 million barrels per day will begin from August.  a move higher to the 200-day SMA in the $43.30 zone should not be ruled out in the short-term horizon.

European equities opened with gap to the downside on today’s trading session as flaring of diplomatic tensions between the world’s two largest economies continues to weigh on sentiment. Global investors will be reacting to China’s retaliation to the U.S. decision to force the closure of the Chinese consulate in Houston. The pan-European Stoxx600 dropped 1.7%and yesterday rose just 0.03%. All eyes turn to EU and UK PMI for July and could give to traders an insight into the economic activity.