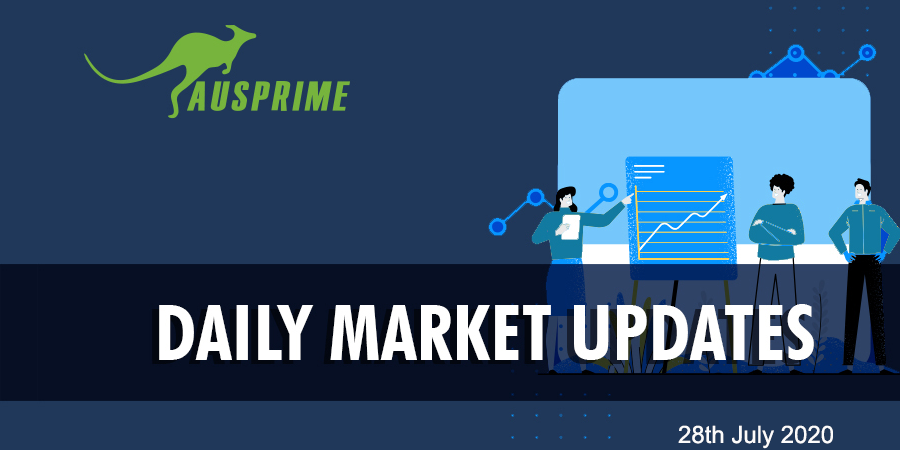 Futures on equities in Australia and Hong Kong had moderate gains and were little changed in Japan. Asian equities seem that set for a muted start to trading today after the US counterparts made conjectures that the Fed will reinforce its dovish outlook. Shanghai Composite Index gained 0.3%, while Hong Kong’s Hang Seng index HSI, shed 0.4%. South Korea’s Kospi index rose 1.3% and Japan’s index decline by 0.16%.

US equities advanced higher yesterday after the Senate Republicans announced a roughly $1 trillion coronavirus relief package and they finally found a deal with Democrats in regards with the employment’s payments expiration. Stocks also rose as investors mainly focused on this week’s earnings such as Apple, Amazon which stocks rose by 2.37% and 1.54% respectively. Shares of Moderna surged after the company said it received an additional $472 million in funding for its COVID-19 vaccine. Yesterday Dow Jones higher by 0.44%, while SP500 went up by 0.74% and Nasdaq rose by 1.86%.

Euro/Dollar continue its bullish momentum, despite that the durable-goods orders reports yesterday for June showed a climb 7.3% 0.1% higher than expected, and orders minus transportation rose 3.3%. Another reason that euro rose was the July Business Climate Index rose from 86.3 to 90.5, pointing an increase third month in a row. Economists had forecast a rise to 89.3. The dollar weakened 0.8% against its six major rivals. The upward trend in new COVID-19 cases also weighed as the UK announced quarantine measures for travellers returning from Spain. Following the recent price action, Cable could now head towards the critical 1.30 mark in the next weeks, noted FX Strategists at UOB Group. On the overnight trading pound found again the strong and critical resistance level of 1.29 and then slid lower as it is currently traded at 1.284. The pair retreated slightly today, amid some Dollar short-covering move ahead of the FOMC meeting. A break above 1.29 may lead pound go towards to 1.30. The yen was at 105.42 per dollar after appreciating 0.7%. For three consecutive days dollar lost value against yen streak while extending pullback from 105.45, as Japan’s Corporate Service Private Index rose past-0.5% forecast to 0.8% in June and dollar remain weaker against its major counterparts.

Gold climbed to a record high, surpassing the all-time highs breaking above the level of $1919 per ounce driven by a new spike in new coronavirus cases that have added to economic uncertainty. Gold futures gained around $33.50 per ounce to a fresh record Monday, up 1.8%, to settle at $1,931 an ounce on the New York Mercantile Exchange and was well boosted from dollar’s plunge. Gold players should await Fed on Wednesday and make a break before look into $2000 per ounce.

September futures for the U.S. crude benchmark gained 31 cents, or nearly 0.8%, to settle at $41.60 a barrel on the New York Mercantile Exchange. Prices of the barrel of WTI are extending the side-lined theme around the $41.00 mark amidst rising open interest and volume, which supports further consolidation pattern for a short-term period. While the consolidative mood prevails, occasional bullish attempts should meet decent resistance around the 200-day SMA at $43.15 per barrel.

European equities advanced slightly higher in the early trading session today as signs of progress on fresh U.S. government stimulus efforts. The Stoxx600 the Pan-European index, which is currently losing, -0.31% closed 1.1%, while the FT100, declined 0.3%. New travel bans were imposed in Asia and Europe as surges in Covid-19 cases have been reported in a number of countries which had seemingly contained the virus.

Trump signs coronavirus relief bill bringing down the curtain to an uncharacteristic year in the financial markets
January 6, 2021
Search
Any Questions?
Please fill in the details below and a representative of our team will get back to you
Go to Top
We use cookies to ensure that we give you the best experience on our website. If you continue to use this site we will assume that you are happy with it. Ok