Second US stimulus package proposed by the Congress 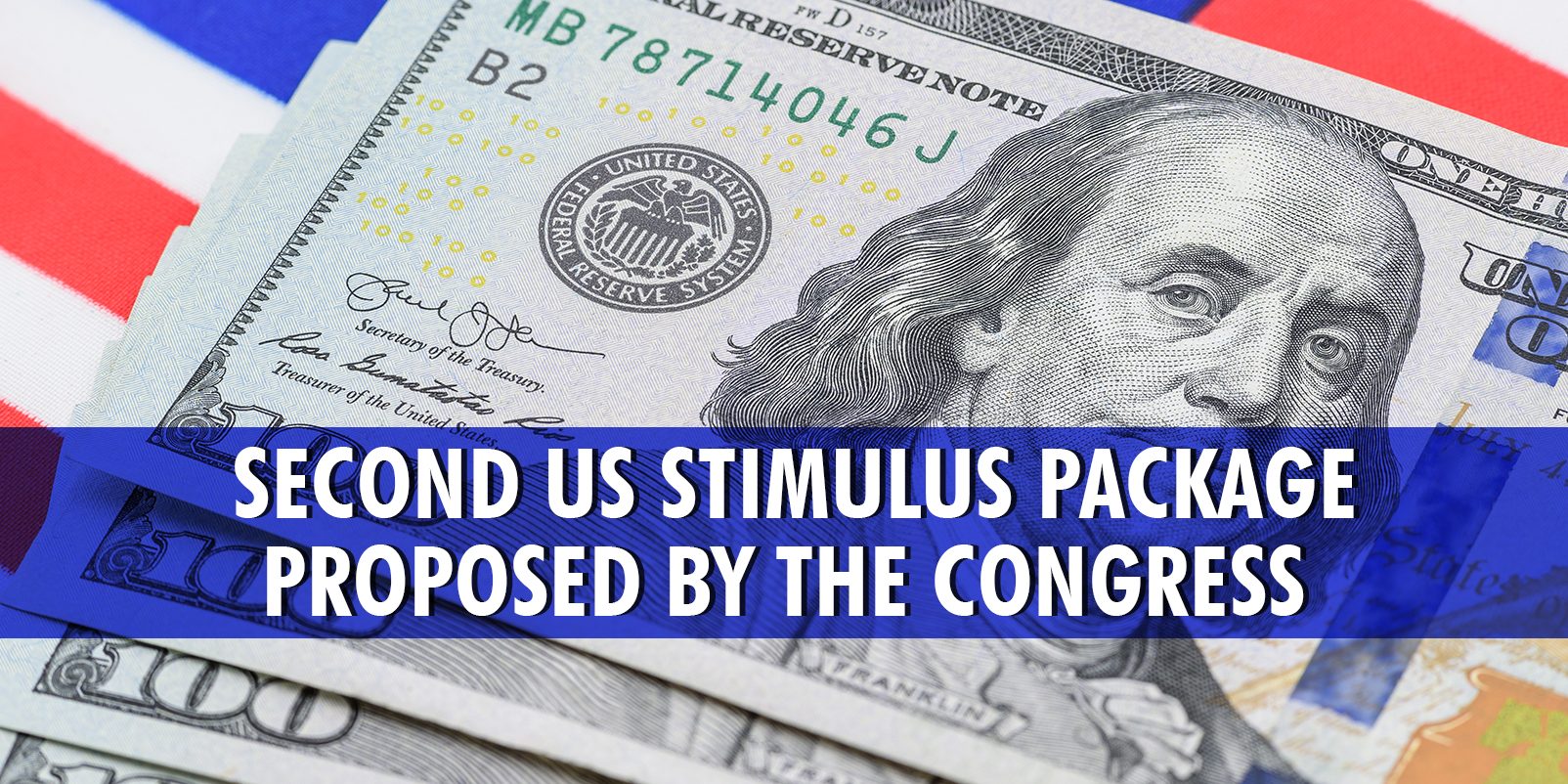 US markets – US stocks market were going up for three consecutive weeks, however last week slid lower. Millionaire investors are more optimistic about US economic recovery, despite that coronavirus cases increased day by day. Bullishness among investors with $1 million or more in a brokerage account they self-manage was up 13% from last quarter, according to the latest E-Trade Financial investor survey. Beginning of last week, US stock market advanced higher and were enhanced by a rally from technology stocks amid investor’s upbeat mood about the prospects of a novel coronavirus vaccine being ready soon. US stocks continued increasing as investors snapped up beaten-down energy and financial stocks amid a sequence of corporate earnings reports, including Coca-Cola and Lockheed Martin’s second-quarter results. US market also advanced higher, amid promise from US Congress of additional US stimulus package. Investors weighed inflamed tensions between US-China, a potential extension to enhanced unemployment benefits, and coronavirus vaccine positive news. Additionally, investors are hoping that US Congress will pass a new spending bill before the $600 weekly unemployment-insurance boost is exhausted at the end of the month. Last Friday, US stocks fell sharply with technology stocks giants such Apple and Microsoft losing more than 4% and around 27% of SP500. The drop of those stocks accounted for more than half of Dow’s losses, as investors became pessimistic about employment, along with concerns that Congress may not provide further stimulus package due to political controversies. Earnings will play significant role for the course of the stock market, as big companies such as Apple, Facebook, Amazon will report their quarterly earnings. On Thursday, the second-quarter GDP data, will be released by the US Commerce Department, with economists expecting an unprecedented 33% contraction due to the coronavirus pandemic. A weaker dollar should be a positive for equities, though foreign stocks will likely benefit more, analysts said, however is not necessarily good for stocks if it reflects big problems on the domestic front.

Asian Market  – Mainland Chinese stocks advanced higher beginning of last week. Chinese one-year and five-year loan prime rate remain unchanged, according to Reuters, as its economy resume rebounding, while Japan’s exports plunged 26.2% in June from a year earlier, a worse drop than expected. Autos, a big export sector for Japan, fell. Nissan dived 3.12%, Mitsubishi Motor tumbled 2.12% and Suzuki declined 3.79%. South Korea’s economy contracted by 3.3% in April-June and exports fell by 16.6%. Healthcare stocks supported the Chinese equities market on rising hopes for a coronavirus vaccine. Strength in technology and health care stocks outweighed losses in energy companies and banks. Additionally, Asian stocks rose as EU leaders make efforts to reach a deal on a massive stimulus plan and this lifted global risk appetite. Asian stocks lost momentum later on the week after a mixed US session on doubts over the timing of a fresh US stimulus package program, along with the Sino-American tensions.  The market was also affected because China requested the U.S. consulate in the western city of Chengdu to be closed, in retaliation for the U.S. closure of the Chinese consulate in Houston following allegations of spying. Shares in Asia were mostly higher this week. Investors are waiting for further stimulus package from lawmakers, as the US Republicans have finalized a bill worth about $1 trillion. The Sino-American tensions increased last week and led Asian stocks to plunge on Friday. China’s industrial profits for June soared 11.5% year-on-year, according to the country’s National Bureau of Statistics.

European Markets – Optimism amid a compromise on the economic recovery fund in the Eurozone was still a key focus actor for European stocks beginning of last week. EU leaders finally achieved a deal on a 750 billion euro of a recovery fund to confront the coronavirus and they also agreed on a 7-year budget running from 2021 to 2027, of €1.074 trillion expenditure. The recovery package comprises €390 billion in grants and the remainder in loans. The two combined bring upcoming investments to the level of 1.824 trillion euros. On Thursday in the afternoon trading European stocks slid, after U.S. President Donald Trump warned the pandemic would “get worse before it gets better.” The pan-European Stoxx600 index fell 0.9%, giving back much of the last two day’s gains. Coronavirus fears are overshadowed by vaccine hopes and EU’s 1.8 trillion budget and recovery plan. European equities opened with gap to the downside on Friday trading session as flaring of diplomatic tensions between the world’s two largest economies continues to weigh on sentiment. Global investors will be reacting to China’s retaliation to the U.S. decision to force the closure of the Chinese consulate in Houston. It was downward momentum for the European major equities on Friday EuroStoxx600 falling by 1.70%. Today EU stocks opened lower as investors focus on US-China tension, with Stoxx600 edged lower by 0.2%, while corporate earnings season gathers momentum.

Gold Market – Gold prices slow down at the beginning of last week, although the positive close last week at $1810 per ounce, as the increasing number of coronavirus globally increased the US dollar haven demand. Analysts at Citigroup assess a 30% probability it would go above $2,000 in the next 3-5 months, something that seems to may happen faster than expected. Gold prices began higher later on the week, near a nine-year peak, as concerns about a new spike in COVID-19 cases, along with expectations for inflation that most probably may be caused from further economic stimulus measures boosted demand for the precious metal. The focus also remained on the US Jobless Claims data which showed another negative report and aided gold to advanced even higher. The all-time high $1919 since 2011, finally broken. On Friday gold price soared to $1905 per ounce slightly below the all-time high of $1920. Investors reacted positively after the announcement from Mark Mobius a veteran on emerging markets that a bullish momentum will continue. The veteran said that the price will continue to rise because of negative real rates, a weaker US dollar, and the recent geopolitical issues. In a statement, analysts at UBS upgraded their target to $2,000 while those at Bank of America expects it to reach $3,000. Gold prices advanced even higher this week to a new record. Spot gold traded as high as $1,943.927 per ounce, before paring gains to change hands at around $1,931.76 per ounce. Those levels eclipsed the previous record high price set in September 2011. Buyers remain hopeful ahead of US Durable Goods data and for the US stimulus progress. “The bullish momentum may continue only on a break above the $1950 psychological level if the bulls surpass the latest record high.

Oil Market – Crude oil markets initially pulled back beginning of last week, as the WTI was finding massive resistance in the form of the $41 level. Oil prices were squeezed to the upside and if the price break above $42 per barrel most probably will go towards $49 per barrel. OPEC and its alliance agreed to reduce production cuts by 2mb/d to 7.7mb/d from August. Rising coronavirus cases could lead to another reduction in traffic while refinery margins have yet to recover, suggesting refiners’ demand will stay subdued, per ANZ Bank. Oil prices found some support after positive news of vaccine development. Both Brent and WTI are traded within $2 dollars price range in July and this shows shrinkage. Industry group American Petroleum Institute (API) has reported that US crude inventories rose before two weeks by 7.5 million barrels compared with expectations for a draw of 2.1 million. Oil inventories increased as coronavirus cases continue to climb. Citing official data, Reuters reported that oil exports from Saudi Arabia, the OPEC’s top producer, fell by 12 billion dollars or 65.0% in May 2020. The COVID-19 is obviously the main issue as travel restrictions remain in place in certain parts of the world but adding trade tensions to the mix could really be problematic. The OPEC Oil output cuts have helped the situation dramatically.  A move higher to the 200-day SMA in the $43.30 zone should not be ruled out in the short-term horizon. This week prices were little changed in the afternoon of Asian trading hours, Brent crude futures hovering above the flatline at $43.35 per barrel. Weak dollar continues to support but rising tensions between the US and China partially offset positive impact in oil prices.

Foreign Currencies –  Euro/Dollar began the previous week on a positive foot and was lifting to the 1.1465/70 band, new three-month peaks. The optimism over a virus vaccine which continues to undermine the greenback, along with the EU agreement on the recovery fund aided euro appreciate against dollar. It is the seventh consecutive day that euro still appreciating against dollar and for fifth week in a row, and since early July almost gained a record of 700 pips. Despite euro is an overbought condition, the downside seems to be limited as euro remains on a bullish path. Euro has much appreciated against dollar during this week and is being supported by the European recovery fund of 750 billion agreement and may continue appreciating as dollar remains weaker. Euro continued rising on Friday, after jobless claims showed its first increase in weeks. The Labor Department data showed 1.42 million US citizens filed for first-time benefits, a rise of 109k and the first rise of those seeking benefits since late March. Euro is resuming the bullish momentum this week and achieved to break above the 1.17 critical level and is eyeing for further upside. The Eurozone’s manufacturing PMI rose from 47.4 to 51.1, with the services PMI jumping from 48.3 to 55.1, oppositely with the US Manufacturing PMI with a rise from 49.8 to 51.3 falling short of a forecasted 51.5. In light of the recent price action, Euro/Dollar could now extend the move to 1.1750 and even beyond 1.1800, suggested FX Strategists at UOB Group. Pound/Dollar hovers in a choppy trading range between 1.2685 and 1.2670. Haldane noted that the UK’s economic recovery is still looking V-shaped, which inspired bullish traders and provided an additional boost to the British pound. Closer US-UK coordination against China and reports that UK could give up Brexit talks are weighing on sterling. A progress towards a coronavirus vaccine had boosted the pound earlier in the week. The cable is supported by BoE’s Haldane economic outlook. According Reuters UK wants a Brexit free trade deal with the European Union but is prepared for a no-deal. The British pound remained relatively stable after the fifth round of Brexit negotiations ended with no deal in sight. Friday’s UK retail sales and PMI reports for July led sterling go towards 1.28 next resistance level. The UK retail sales came in at +13.9% in June against +8.0% expected and +12.0% previous and on an annualized basis. Pound is almost in overbought conditions and preventing investors for further bullish movements and this comes amid fears of a no-deal Brexit. The pair is currently traded slightly above 1.28 this week. Last week Dollar/Yen struggled to extend rebound moves from 107.02. BOJ Minutes suggest policymakers praised aggressive fiscal and monetary policies. The Japanese PMI’s (composite 43.9) for July stayed well below the 50-mark indicating that the economy is still struggling at the start of third quarter. Japan Jibun Bank Manufacturing PMI improved to 42.6 in July, according to preliminary estimates. Price met renewed selling at 107.22 in Friday and dropped to 106.72 due to fall in U.S. stocks and yields. Dollar/Yen was quiet around the low 107s until risk aversion spiked and sent the yen higher.