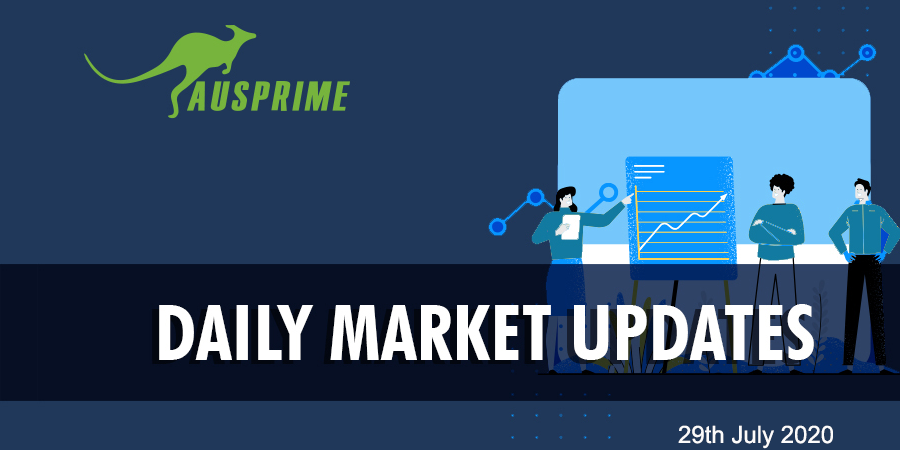 Us stocks declined yesterday after negatives earnings report from some large American companies, as a result, investors became pessimistic and that showed even larger hit from the coronavirus pandemic than investors had been expecting. The Dow Jones fell 205.49 points or 0.8%. The SP500 lost 20.97 points, or 0.6%, while the tech-heavy Nasdaq Composite declined 134.18 points, or 1.3%. Investors will monitor the talks among Republicans and Democrats for a 2nd aid package, along with Fed decision today.

Euro/Dollar sustained above the critical level of 1.17, as the market waiting for today’s Fed monetary policy. Strong resistance can be found around 1.175 and support at 1.165. It is not expected that Fed will create those conditions in order to help much the dollar today, however, yesterday announced that its board of governors had decided to extend until the end of the year several emergency loan programs that had been set to expire on Sept. 30. The Conference Board’s consumer-confidence index fell to 92.6 in July from a revised 98.3 reading in June. Pound/Dollar is currently traded above 1.29, consolidating previous gains which is caused from dollar weakness. Uncertainty about Brexit, Sino-British relations, and the Fed decision today are in play. Cable’s recent performance hints at a potential move to the key 1.30 mark in the next weeks, suggested FX Strategists at UOB Group. Pound yesterday appreciated against dollar and one of the keys was that the National Institute of Economic and Social Research (NIESR) noted that they see the UK economy shrinking by only 10% in 2020. The strength is very interesting as the Bank of England is considering negative interest rates. Dollar Yen remains pressed near the lowest since March 13. The Comments from BOJ’s Amamiya, risk catalysts will be the key ahead of the FOMC announcements. Dollar declined to 105.00 as Tokyo opens for trading today. Additionally, the comments from the BOJ policymaker who may shed light on the Japanese central bank’s easy stand amid the pandemic, will be significantly affect the yen course against dollar/

Gold on futures trading are currently traded higher by 0.16%, yesterday advanced even higher by 0.7% to a new all-time closing record of $1,955.60 per ounce, a day after hitting an all-time high. Gold yesterday achieved to touch $1980 per ounce before retreat to $1955. Gold bulls taking a breather ahead of the key Fed decision later today. The bullish bias remains in place amid dovish Fed expectations, as the US economic recovery stalls on the back of the virus second wave ramping up across the US.

The American Petroleum Institute announced yesterday the level of oil inventories for the previous week and how much production is available for storage. The API confounded analysts’ predictions of a moderate inventory build and reported yesterday a draw in crude oil inventories of 6.829 million barrels for the week ending July 24, better than expected. Today we expect the Energy Information Administration’s (EIA), to show weekly change in the number of barrels of commercial crude oil held by US firms, which is expected to be 357K barrels. The rising geopolitical tensions between the US and China could even begin to weigh on oil, with reports that Chinese imports of energy products are only 5% of where they need to be by year-end under the terms of agreed trade deals.

European equities could jump 10% on the back of a historic agreement over fiscal stimulus in the European Union, Morgan Stanley said in a note Tuesday. In European zone, the Stoxx600 Europe rose by +0.41% and the U.K.’s FTSE 100 UKX, +0.39% both closed 0.4% higher.