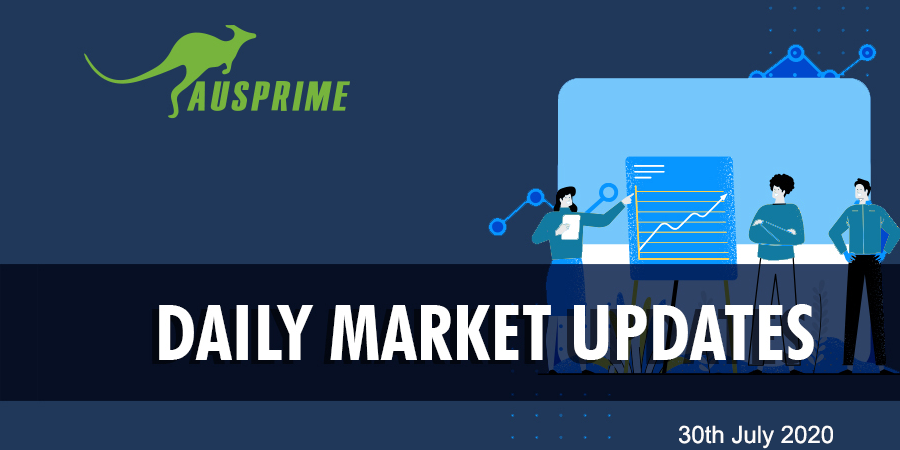 Asian stocks rose along with US equities as Fed left unchanged its interest rate decision policy. Equities in Hong Kong, India and Australia showed an increase, while the gains in Tokyo decreased. The Shanghai Composite index has rose by 2.1%, while Hong Kong’s Index HSI, gained 0.5% and Japan’s Nikkei index, fell by 1.2%.

As it was expected on yesterday’s monetary policy decision, Fed kept interest rates near to zero, and led US stocks close higher. Powel repeated his promise to provide further support until the economic fully recover and until unemployment recovers and inflation picks up. Dow Jones gained 160 points and closed by 0.6% higher, while SP500 jumped 1.2% and Nasdaq index rose by 1.4%. Powell noted that households and the jobs market have slightly improved since May. The US trade deficit in goods declined to $70.6 billion during June, which represents 6.1% decline in June from the previous month.

Despite the unchanged interest rate from Fed euro did not manage to surpass the 1.18 critical level yesterday and finally dollar gained some value against it, however euro closed even higher. Today euro/dollar is trading closer to 1.175 as dollar gaining ground. German and US GDP are set to confirm recessions with highly uncertain levels of economic pain. German GDP is expected to show a contraction by -9% QoQ in April to June (Q2) after shrunk 2.2% in first quarter. The ZEW Economic Sentiment arrived at 59.3 in July vs. 60.0 expected. Cable keeps the positive outlook and is expected to meet the next hurdle at the 1.3080 zone, suggested FX Strategists at UOB Group. While further gains are not ruled out, severely overbought conditions suggest GBP is likely to grind upwards and gain could be limited to 1.3035. The pound course will be affected today mainly from US release of the Advance GDP report, which is expected to show a contraction of 34.1% during the second quarter of 2020. Dollar is trying to recover, despite upbeat Japanese Retail Trade data which showed decrease 1.2% than 6.5% what expected. BOJ policymakers suggest will extend negative rates if needed after Nikkei signalled downgrade in Japanese GDP forecast.

Gold on futures advanced higher about 0.5% and settled at a fresh new high record of $1,953.40 per ounce. Globally, demand in gold for the first and second quarter of 2020 has dropped, however gold as an investment jumped to new records as gold ETF’s touched an all-time-highs by the end of June according to World Gold Council today. The metal for use in investment as a jewellery, technology and in central-bank purchases, has fell 11% year-on-year in the second quarter of 2020, at 1,015.7 metric tons, pulling demand for the first half of the year down by 6% to 2,076 metric tons.

Oil futures closed higher yesterday and rose by 0.6% on the New York Mercantile Exchange. Brent crude futures settled at $43.75 per barrel, which is 53 cents higher, or 1.2%, while US West Texas Intermediate crude futures settled at $41.27 per barrel, gaining 23 cents, or 0.6% according to Reuters. Oil futures closed even higher yesterday, after the Energy Information Administration’s (EIA), showed 10.612 million barrels weekly decline in U.S. crude — the largest so far this year, a number which was far away from expectations. Support is at $40 per barrel and resistance at $42 per barrel and a move back lower than $40 could trigger a decline to $36.

Most of the European equities closed yesterday lower, with the Stoxx600 index which is currently traded by -0.06% closing lower by 0.1% and the UK’s FT100 index closing less than 0.1%. In a busy Wednesday earnings day, the pan-European STOXX 600 closed 0.1%, with healthcare (SXDP) and banks (SX7P). Profits for STOXX 600 companies are expected to decline by a record 59% in the second quarter of 2020, according to Refinitiv data.