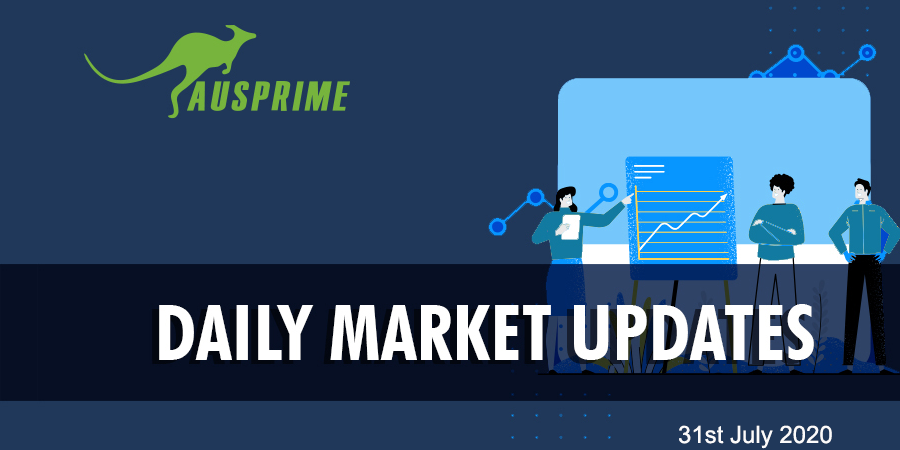 Asian equities followed US stocks after shares of Amazon, Apple and Facebook surged in Thursday’s trading session, amid earnings report, but had losses despite the strong US tech earnings and manufacturing recoveries in China and Japan. The Shanghai Composite SHCOMP which is currently traded by 0.37% higher, declined 0.2%, while Hong Kong’s index, lost 0.7, Japan’s Nikkei225 index, gave up 0.3% and South Korea’s Kospi index rose slightly by 0.18%.  Analysts are expecting industrial production data from Japan on Friday, along with China’s Purchasing Managers Index, a measure of factory activity.

Dow Jones and SP500 indexes closed lower yesterday, however Nasdaq booked some profits ahead of earnings from megcap technology companies, including Amazon, Alphabet, Apple and Facebook. What causes the US market to drop yesterday was the US DGP announcement that showed a fall of 32.9% annualized during the second quarter and dollar became weaker. The lack of progress in talks between congressional Democrats, Republicans and the White House on a fresh relief  package also weighed on sentiment.

Major Currencies  – Euro has extended its gains yesterday by reaching the substantial level of almost 1.19, the highest level since June 2018, as the demand for the currency and other EU assets increased, amid expectations that normal economic activity would continue faster in the region. Despite German GDP annoucmenet yesterday which showed a contraction of minus 10.1 against 9% that was expected, euro managed to climb even higher and justified analysts’ predictions. As long as the dollar losing value pound the way to climbed even higher as analysts predicted and surpassed the pre expected level of 1.308 and is currently traded at 1.313. The US fiscal impasse, the along with the decline of US bond yields undermined the green buck. The immediate support now becomes at 1.30 price level and is closely followed by the 1.3080-75 region. Pound/dollar rises to 1.3130, up 0.26% on a day, and is on course for the five-year resistance line at 1.3175, Karen Jones, Team Head FICC Technical Analysis Research at Commerzbank reported. Despite the UK government announced local lockdown and Brexit-negative news, the cable appreciated. Dollar/Yen remained under some heavy selling pressure for the seventh consecutive session. The recent dovish view from Fed negatively affected the dollar against its major counterparts, like yen. Market participants now look forward to the US economic docket, featuring the release of Core PCE Price Index, Personal Income/Spending data, Chicago PMI, and Revised Michigan Consumer Sentiment. USD/JPY drops to the lowest levels since March 12, 2020. A break below 104.15 would trigger a drop towards 103.90.

Gold on futures market  fell by $11.10, or 0.6%, to settle at $1,942.30 per ounce, after settling at a record on Wednesday, pointing its ninth straight advance, which is its longest win streak since a 10-session climb ended in January. Spot gold dropped 0.2 per cent to $1,955.65 per ounce. The chief investment officer of a private wealth management at Goldman Sachs Sharmin said that gold is overpriced, however raised its 12-month forecast for gold to $2300 from $2000 per ounce.

Crude Oil fell following Trump’s tweet where he said to delay the presidential elections of November 2020, even though he cannot do it. U.S. West Texas Intermediate (WTI) crude futures settled down US$1.35, or 3.3per cent, at US$39.92 per barrel after falling 5 per cent earlier in the session. Investors have concerns about a resurgence of coronavirus around the world. Iraq’s rising oil exports have increased concerns that Russia and the Saudis might start unwinding the OPEC+ deal as Iraq continues to cheat on production cuts. September futures on Brent crude, fell by 1.9%, at $42.94 per barrel and the expiration is on today’s session closing.

European decreased the narrowed earlier losses, with the Stoxx600 index 2.15% closing 2.2% and the FT100 finishing 2.3% lower. As yesterday announced Germany’s economy contracted by 10.1% in the 2nd quarter of 2020, against a 2% contraction in the 1st quarter. Economists forecasted a 9% contraction which was worse than expected.