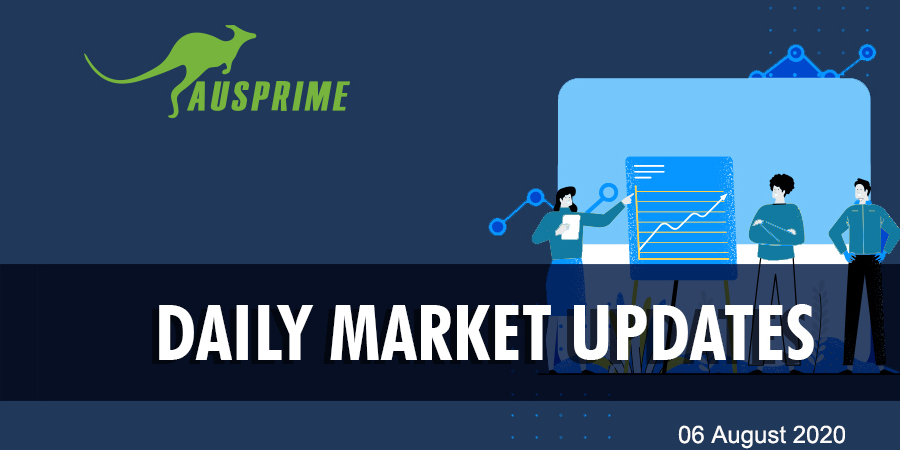 The Wall Street Journal reported late Tuesday that senior US and Chinese officials will discuss the countries’ “phase one” trade deal on August 15, six months after the agreement was made. Following Wall Street’s lead, MSCI’s broadest index of Asia-Pacific shares outside Japan extended the week’s rally by 0.3% to a fresh six-and-a-half-month high.

US equities remain strong and climbed yesterday as investors are hopeful for a further stimulus bill breakthrough and it is expected that Donald Trump and Democrats may find a deal by the end of the week. SP500 closed at 3,319.92, rising by 0.4%, while Dow Jones index rose by 0.7% and Nasdaq index increased slightly by 0.1%.

Hiring US data released by ADP yesterday showed that the private payrolls in the US increasing by 167,000 during July and was well below the 1.2 million estimates from economists surveyed by Bloomberg and the revised 4.3 million increase seen in June. Dollar remains weaker against euro and is currently traded slightly above 1.19. FX Strategists at UOB Group noted EUR/USD could advance to 1.20 on a close above 1.1930 in the next weeks. Another reason was due to worries that no deal has been taken for further relief package yet. Pound performed slightly well today, gaining 40 pips against dollar as the Bank of England’s (BOE) Monetary Policy Committee decided to keep the policy rate unchanged at 0.1% at its June policy meeting as it was expected. The BOE held the Quantitative Easing program unchanged £745 billion. In previous report BoE noted that will not tighten the rates unless inflation sustainably moving to the target. Cable is now facing the next key target at the 1.3200 level in the next weeks, suggested FX Strategists at UOB Group. On Dollar/Yen has been observed a bearish channel on 15 minutes timeframe and a breakout may lead the pair to retest nearly 106 price level. U.S. ADP private payrolls data led dollar depreciating against yen and we saw a new selling pressure to an intra-day low to 105.3. All eyes now turn to US jobless claims report

Gold prices increased to a new record all time-highs after passing well above the $2,000 per ounce level on Tuesday. The precious metal has rallied in recent weeks amid fears of a weakening dollar and broad shift to safe-haven assets. Gold spot yesterday closed at $2035 and is currently traded at $2049 per ounce. Open interest in Gold futures markets shrunk by nearly 6.8K contracts on Wednesday, according to preliminary figures from CME Group. On the other hand, volume rose for the second consecutive session, this time by around 100.5K contracts. Sino-US tensions and fiscal wrangling in the US may lift USD and put gold under pressure.

According to CME Group for Crude Oil futures markets, traders increased their open interest positions for the second consecutive session on Wednesday, this time by around 31.2K contracts. Volume, too, rose for the third straight session, now by around 247.8K contracts. Prices of the WTI reached already the key 200-day SMA above the $42.00 mark amidst rising open interest. Crude Oil stocks fell 7.4 million barrels in the week ending July 31st, as EIA announced yesterday, against expectation of minus 3 million barrels.

Positive earnings reports and a surge in commodities shares lifted European stock markets on Wednesday, however the fear amid new wave of a coronavirus tempered the mood. The broader pan-European STOXX600 index ended 0.5% higher, while FT100 rose by 1.1% and Germany’s went up 0.5%.