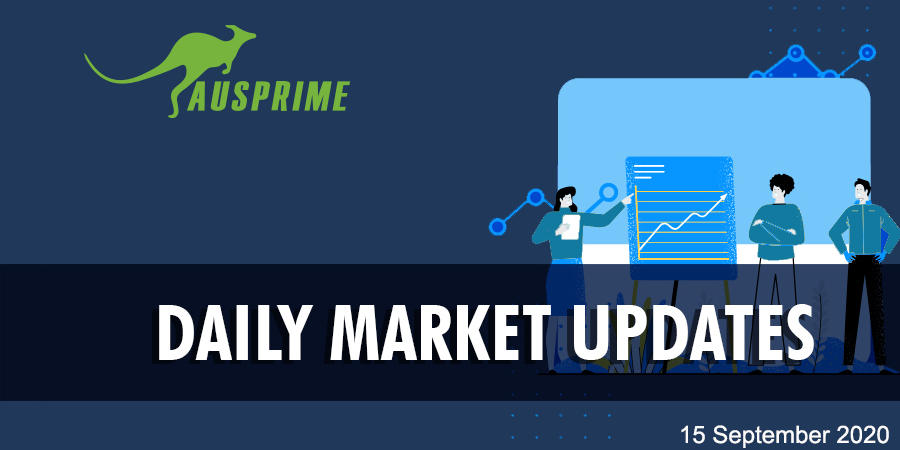 Investors were eyeing on Chinese economic outlook report on retail sales for August, which came out with increase of 0.5%, alongside with an increase of 5.6% in industrial production of the country according to country’s National Bureau of Statistics and led the Asian stocks edged higher. Shanghai index closed the day yesterday by 0.57% higher, while Hong Kong’s index rose by 0.56%. Japan’s index Nikkei rose by 0.65% and South Korea’s Kospi index rose by 1.35%.

US equities on futures market rose higher for third consecutive days after the market kicked off the week with broad based rally. Investors sentiment boosted amid positive news of the vaccine developments. Dow Jones Industrial index rose by 1.08% higher yesterday, while SP500 rose by 1.27% and Nasdaq Composite index gained 1.87%.

Euro/Dollar closed the day higher yesterday against Us dollar by almost 30 pips as the industrial production rose by 4.1% in July, following a revised 9.5% climb within June. Economists had forecast a 4.0% rise. While the US dollar has been on the back foot across the board, GBP/USD has been unable to rise as the controversial legislation may derail a deal between the EU and the UK. The Pound/Dollar pair held on to its moderate gains near session tops, just above mid-1.2800 and had a rather muted reaction to the UK macro data. According to FX Strategists at UOB Group, Dollar/Yen could drop further and test the 105.20 region in the next weeks. Suga’s election victory earlier in the day strengthened the yen against dollar. Dollar/Yen is off intraday low of 105.66, currently around 105.70.

European stock market was mixed yesterday as DAX30 slipped by 0.07%, while CAC40 and the Pan-European index Stoxx600 had moderate gains and rose by 0.35% and 0.15% respectively.

Daily Market updates 11.09.2020
September 11, 2020
Search
Any Questions?
Please fill in the details below and a representative of our team will get back to you
Go to Top
We use cookies to ensure that we give you the best experience on our website. If you continue to use this site we will assume that you are happy with it. Ok