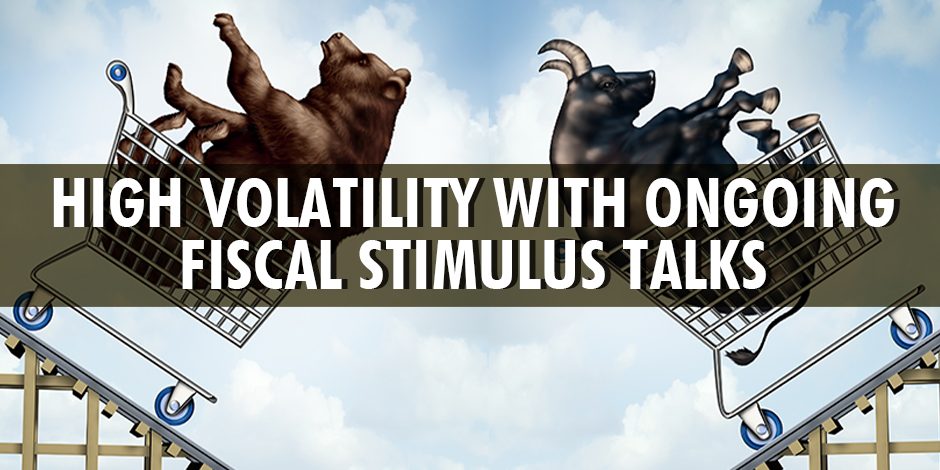 Stocks climbed last week, with the S&P 500 recording the best weekly rise since early July. The driver behind the equity-market strength was the anticipation that another stimulus package will eventually be passed despite ongoing shaky negotiations.

The White House increased its fiscal stimulus offer to $1.8 trillion from $1.6 trillion, which partly bridges the gap but is still short of the $2.2 trillion package the House has already approved. A deal is inevitable, even if it comes after the election, as both sides agree to the need for more spending to offset the pandemic’s hit to incomes and certain industries.

Policies vs. Politics: Implications both will have on the Market

Two forces were in the driver’s seat last week: policy and politics. The election (politics) is expected to keep a hand on the wheel in coming weeks, while fiscal and monetary stimulus (policy) will be a more persistent driving force behind the economic recovery ahead.

Policy – Markets fluctuated last week as expectations remained uncertain for another round of business and household financial aid. Stock markets sold off as negotiations over another round of fiscal relief could not be agreed on. The markets regained strength amid the prospects that smaller and more target specific aid packages could potentially find some agreement among policymakers.

Politics – Election turmoil and headlines will be a key influence on the market over the next couple of weeks. Stocks rose with the news of President Trump’s improved health situation, but the contentious campaign and deep partisan divide are likely to affect the market behavior going forward.

On Monday, major indexes rose after President Donald Trump said he would be leaving the hospital. The S&P 500 rose 1.8% The Dow Jones climbed 1.7%, and the Nasdaq added 2.3%. All 11 S&P 500 sectors finished in the positive. President Trump’s recovery seemed to be a large driver for the market’s upward trajectory; however, the market was also spurred along by hopeful news that House Speaker Nancy Pelosi and Treasury Secretary Steve Mnuchin were making progress on recovery talks.

The ISM Manufacturing Index showed that manufacturing continued to expand in September, with energy, information technology, and health care making the largest gains.

On Tuesday, the S&P 500 was up 0.7% in intraday trading with the help of cyclical stocks. However, when President Trump said he would delay fiscal stimulus until after the election, the index dropped and closed with a 1.4% loss. The Nasdaq fell 1.6% due to weakness in large stocks, and the Dow Jones was down 1.3%.

All S&P 500 sectors made gains, with the biggest growth seen in cyclical materials, consumer discretionary, and industrials. As was the case Monday, the real estate sector underperformed.

On Thursday, the S&P 500 rose 0.8% with the help of value stocks. Energy rose 3.8% as oil prices rose. Utilities, real estate, and financials all posted strong gains as well. However, information technology lagged with only a 0.5% gain. Due to this, the Nasdaq posted more modest gains of only 0.5%. Similarly, the Dow Jones rose just 0.4%.

In individual company news, IBM stock rose and helped the tech sector after the company announced a spinoff of their IT infrastructure unit. Boeing rose 2.1% following their discussions with Alaska Airlines around the airline purchasing 737 Max planes. Unemployment claims for the week decreased to 840,000. However, California is still sorting through a backlog of claims, and this number does not seem to represent the entire picture.

On Friday, major indexes rose as hope for fiscal stimulus was renewed. The S&P 500 gained 0.9%. The Nasdaq rose 1.4% due to a strong performance from the information technology sector and mega cap stocks. The Dow Jones added 0.6%. The market got a small bump when reports came out that the White House was developing a $1.8 trillion stimulus package.

Energy, real estate, and utilities fell in daily trading. Reports suggested AMD may be in talks to acquire Xilinx. In other corporate news, Gilead Sciences announced that their COVID-19 drug seems to shorter recovery time and reduce death rates.

Daily Market Updates 06.10.2020
October 6, 2020
Search
Any Questions?
Please fill in the details below and a representative of our team will get back to you
Go to Top
We use cookies to ensure that we give you the best experience on our website. If you continue to use this site we will assume that you are happy with it. Ok