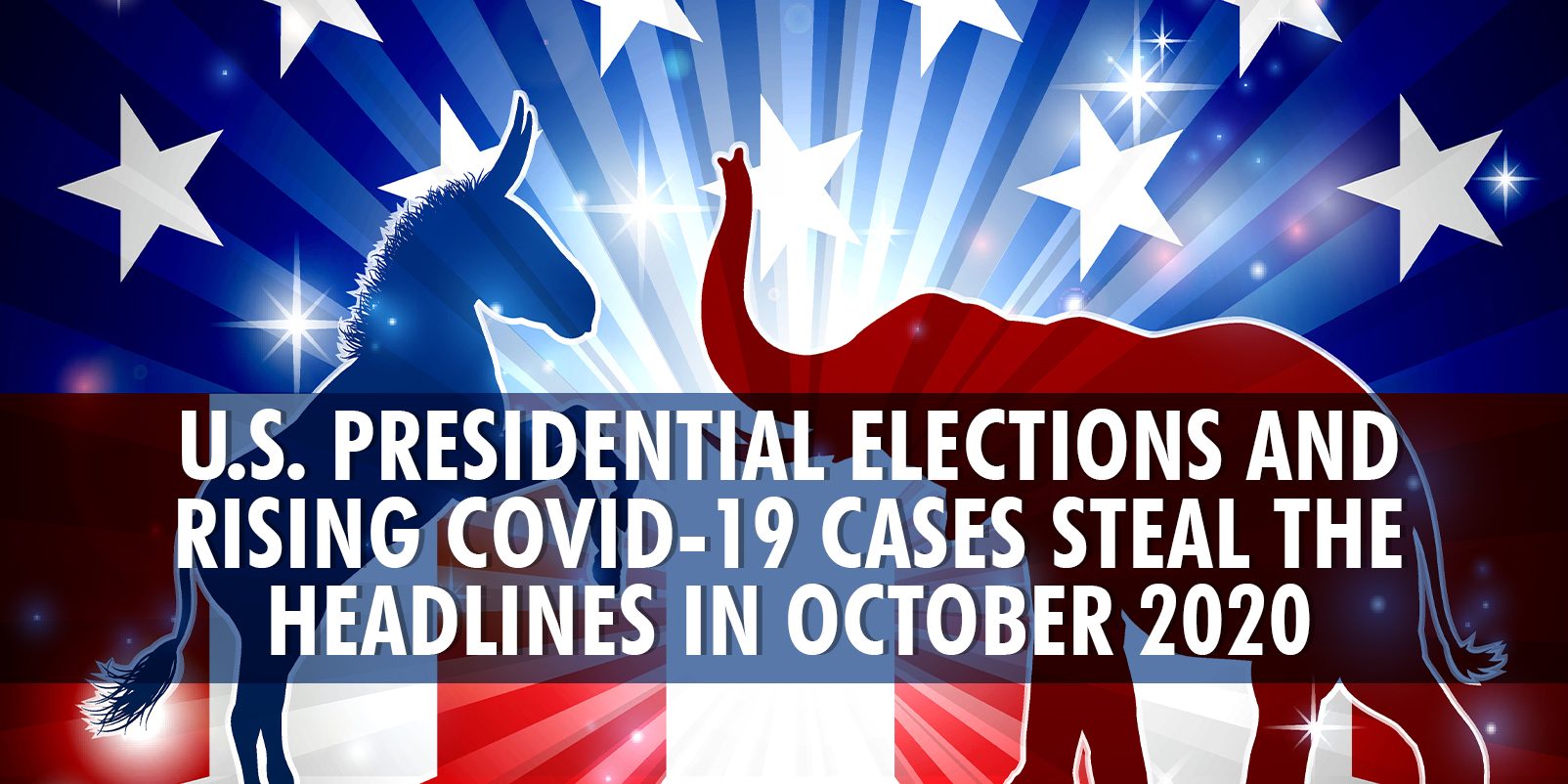 The markets were strongly dominated by two primary factors.

The first being the upcoming US Presidential elections and the second being the resurgence of Covid-19 across many countries on the European continent as well as the United States.

The financial markets spent much of the month anticipating the announcement of widespread restrictions across Europe in the final days of the October month.

As the northern hemisphere firmly heads into the autumn season, the unfortunate second wave of COVID-19 infections has seen all major European economies reporting new highs in infection rates.

The resurgence of COVID-19 in the U.S. and Europe combined with uncertainty pertaining to the U.S. presidential election led investors to take down risk in October by reducing their exposure to stocks. Lower confidence in economic growth put pressure on the stocks in the Dow Jones Industrial Average which ended the month down 4.52%.

Germany, France, and the U.K. all re-enacted some form of lockdown which spooked investors, causing the MSCI EAFE Index to fall 3.99% for the month.

There is however good news and bad news from this development.

The good news is that the rise in infection numbers reflects more widely available testing. The percentage of positive tests has risen since September, which indicates that the virus is spreading, but is still below the peak in April.

The same applies to hospitalization and mortality rates in these countries and this is because the average age of new COVID-19 cases is much lower in the current wave than in the spring. Additionally, the health care systems across Europe and the United States are now better equipped, better prepared and more experienced to handle the outbreak than before.

The bad news however is that governments still need to re-introduce lockdown measures to prevent further escalation of the outbreak. Their response this time round, was more area targeted lockdown – in comparison to the measures imposed during the first wave in the spring season – with local restrictions being imposed in a bid to avoid a full scale national lockdown.

These partial restrictions also aim to limit the economic damage that a full-scale lockdown would create.

This approach however seems to have failed with several countries who were then forced to re-impose full national level restrictions.

The October 2020 flash Purchasing Managers’ Indices data shows further slowdowns in the service sectors across Europe; however, the manufacturing sector remains steady for now. Having learnt from the spring outbreak, governments are now more experienced in pacing themselves when it comes to implementing lockdowns, as well as which sectors are more at risk of spreading the virus.

In France’s latest national lockdown, schools and factories are expected to stay open. This could have an impact on the equity and corporate debt performance in the months ahead.

After a very significant injection of fiscal stimulus in the first half of the year – which was intended to limit layoffs and bankruptcy, and also protect the living standard of mid to low income groups – governments should look to set a slower and more controlled pace when it comes to the second distribution of fiscal stimulus to deal with the latest bout of outbreaks.

Policymakers will need to be more selective on where the second batch of fiscal support will be directed towards. For the United States, the elections and party politics have delayed the much-needed fiscal package, which raises the risk of the economy returning to contraction in 4Q 2020. Despite support from their central banks via government bond buying, this level of fiscal deficit is not sustainable in the long run.

The new wave of infections, pre-election jitters and delay in economic stimulus prompted the U.S. and European markets to correct in late October, even as 3Q earnings performance was encouraging. The S&P 500 dropped 2.8% in October and the NASDAQ was down 2.3%.

U.S. Treasuries failed to provide much protection during this correction, with the 10-year UST yield stubbornly staying above 75 basis points. With yields so low and continued support from the central bank, UST’s traditional characteristic of providing protection during market volatility has now weakened.

The pandemic is relatively stable compared with the United States and Europe, but governments continue to keep a cautious approach with regards to relaxing social distancing measures. The ongoing economic recovery in China is encouraging, as consumption slowly returns to the pre-pandemic levels.

October saw the relaxing of controls restricting movement between provinces that China has kept in place since the outbreak. This has not, led to a resurgence in infections.

China’s success in controlling the virus has allowed its economic recovery to gather pace, as the economy remains on track to expand by 1.5%-2% in 2020, following the 4.9% year-on-year GDP growth in 3Q 2020.

China looks set to be one of the only major nations that will see positive economic growth relative to 2019. Chinese imports have also recovered with the latest data for September showing imports 13.2% higher year on year. A resurgent Chinese consumer may help international exporters given the potential for weaker demand in their home markets.

Against this backdrop, strong returns from Chinese stocks helped emerging market equities to a 2.1% gain over October.

The Chinese government also pointed towards a new development model for the next five years, all the way up to 2035. They have placed a greater emphasis on developing its technology sector and reducing dependence on foreign components. China has also put a lot of focus on clean energy to meet their 2060 target of becoming carbon neutral. Although the rest of Asia, has been relatively successful in containing the pandemic, their high exposure to export of goods and services could have a negative impact on the overall pace of recovery.

Hopes for further economic fiscal stimulus weighed heavy on the USD. The broadly weighted U.S. dollar index slipped to seven-week lows as talks continued in the nation’s capital on aid of around $2 trillion. Risk asset outperformed while safe havens like the dollar struggled. The greenbacks decline was modest as continuous uncertainties over the presidential election and surging cases of the coronavirus cushioned its fall.

The dollar should have plenty of drivers in November when the American people decide whether Donald Trump remains in the White House or if Joe Biden will oust him for the coming years. The month ahead could prove daunting for the dollar, especially if Mr. Biden and the Democrats take control of the Senate, a move that could unlock fiscal stimulus above $2 trillion.

It was another volatile month for the pound due primarily to Brexit-related news and renewed lockdown measures.

UK Prime minister Boris Johnson decided to end trade talks with the EU, and this weighed on the GBP, but then a sudden U-turn just days later triggered a 1.8% daily surge higher in GBP/USD.

Against the EUR, the GBP’s upward trajectory from the previous month’s slump remained intact.

Despite coronavirus cases rising and the UK adapting a tiered lockdown approach, overall risk appetite picked up and benefited the risk-sensitive pound.

The UK government is estimated to have borrowed £208.5bn in the first half the financial year – the highest borrowing in this period since records began.

Britain’s sovereign credit rating was downgraded to Aa3 due to weakening economic and fiscal strength.

Nevertheless, GBP traders were still interested in capitalising on Brexit optimism, which drove the currency’s value in October.

The main drivers for the EUR over the month of October were global factors more so than domestic factors.

High expectations for a new stimulus plan in the United States, along with Brexit talks, fuelled risk appetite among investors and underpinned a surge in demand for the European currency. Nevertheless, the announcement of new social restrictions to curb the spread of COVID-19 across Europe piled the pressures on the currency.

The negative COVID-19 health situation in Europe pushed the euro to its lowest level in 3 months against the Swiss franc.

Flash economic surveys and sentiment indexes signalled a slowdown economic recovery in Europe, especially a contraction of the private sector activity in October.

The euro ended the downtrend it began in September and recovered slightly against the US dollar, reaching a one-month peak near $1.19.

Oil advanced in New York as U.S. lawmakers negotiated the size of a potential spending bill to boost economic recovery, presenting a rare bright spot for the demand outlook.

U.S. crude futures rose above $41 a barrel amid optimism that lawmakers may break a months-long impasse in stimulus talks.

U.S. crude futures have struggled to make a sustained break above $40 as governments try to control new flareups of the virus. The worsening virus in Europe is sapping momentum from an already fragile demand recovery. Still, the prospect of a long-awaited stimulus deal in Washington would provide a much-needed boost to demand in the U.S.

The market is also weighing uncertainty over whether OPEC and its allies will move forward with plans to add 2 million barrels a day back onto the market from January.

Gold ended higher Friday to recoup some of the recent losses that pulled prices to their lowest level in weeks, but the yellow metal posted a third-weekly loss after failing to find haven-related support despite a stock-market selloff.

October has been a surprisingly uneventful month for gold despite the volatility that hit equity markets.

Two countervailing forces on gold were the indefinite postponement of U.S. FISCAL stimulus talks, a negative for gold, countered with the weakening of the dollar through much of the month.

Gold has failed to find support despite a rise in COVID-19 cases that has seen European countries impose new restrictions on activity and raised worries about the strength of the U.S. and global economic recovery.

The last remaining quarter of 2020 contains a high number of unpredictable events for markets to negotiate. Market volatility in October was higher than normal as investors had to deal with both the US election and increased Covid-19 infections and subsequent lockdowns.

November looks to be an equally eventful and very busy month, and several key events should provide a clearer steer on the macro outlook for 2021. The potential catalysts for a rotation between this year’s winners and losers in the stock market are getting closer, but there remains significant uncertainty around the outcome of the US election, Covid-19 vaccine trials, Brexit negotiations and the scale and scope of policy responses required over the winter.