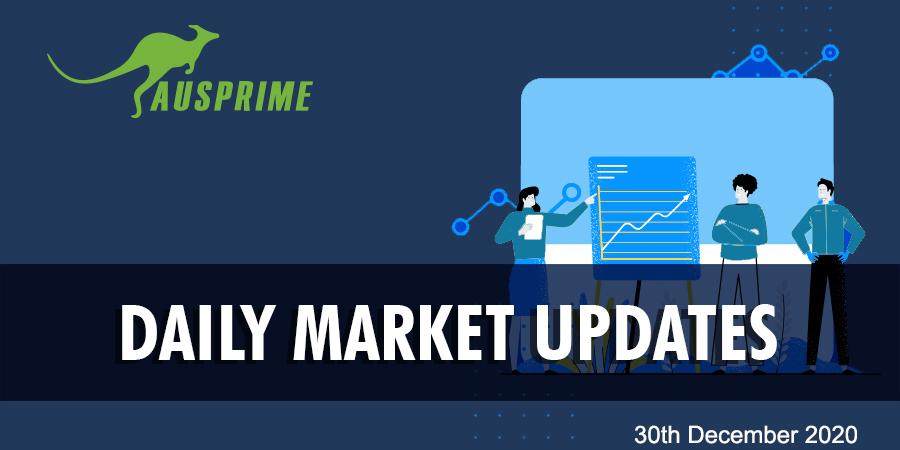 Asian shares rose sharply today after the announcement of the National Bureau of Statistics that said that China’s GDP last year rose only 6.0% to 98.65 trillion yuan ($15.1 trillion), versus 6.1% as previously reported. The primary reason by far was a 503.8 billion yuan ($77.15 billion) reduction in manufacturing and analysts anticipate growth of around 2% in 2020. Shanghai’s index fell by 0.5%, while Hong Kong’s index rose 1% and Japan’s Nikkei index jumped 2.7%. South Korea’s Kospi index rose by 0.35%

As the new stimulus package proposed for $2000 checks to households failed and seem to be remote contingency for the time being stocks market start curving to the downside, as we saw a pullback from the highs during Tuesday, despite Trump provide $900 billion in aid to individuals and businesses and $1.4 trillion to fund government agencies on Monday. S&P500 3,727.04 was down 0.22%, while Dow Jones fell by 0.22% at 30335 and Nasdaq dropped by 0.38% at 12850.

As long as Dollar remain in a selling pressure Euro is appreciated and the pair is currently trade at 1.226 and for the last days is being traded between 1.215 -1.226 range. The GBP/USD pair regained positive traction on Tuesday and recovered a part of the previous day’s heavy losses amid a broad-based US dollar weakness. Pound could easily surpass the level of 1.35 and move back above 1.35 as dollar remains weaker. For second consecutive session Dollar/Yen depreciated today as the prevalent upbeat market mood may undermine the safe heaven Yen and limit losses. The pair is currently traded near 103.25.

Spot gold advanced by 0.3% to $1,883.88 per ounce by early trading session, while gold on futures trading were up 0.2% at $1,887.40 per ounce and the rose underpinned by a weaker dollar a new money is printed. Alongside dollar index has fallen 0.2% as traders looked past Republican Senate Majority Leader Mitch McConnell’s decision to put off a vote on increasing Covid-19 relief checks to $2,000 from $600 today and led gold to new gains.

Brent crude oil on futures market advanced 19 cents, or 0.4%, to $51.28 a barrel, by early trading session while WTI crude oil increased by 29 cents, or 0.6%, to $48.29 per barrel. Oil is backed by weaker dollar. The dollar fell to its lowest in more than two years against the euro as currency. Fewer oil inventories, along with new US relief package led in increase of oil prices. The American Petroleum Institute (API) announced a decline of Us oil stockpiles with a fall of 4.8 billion barrels last week to about 429.2 million barrels, exceeding analyst’s expectations.