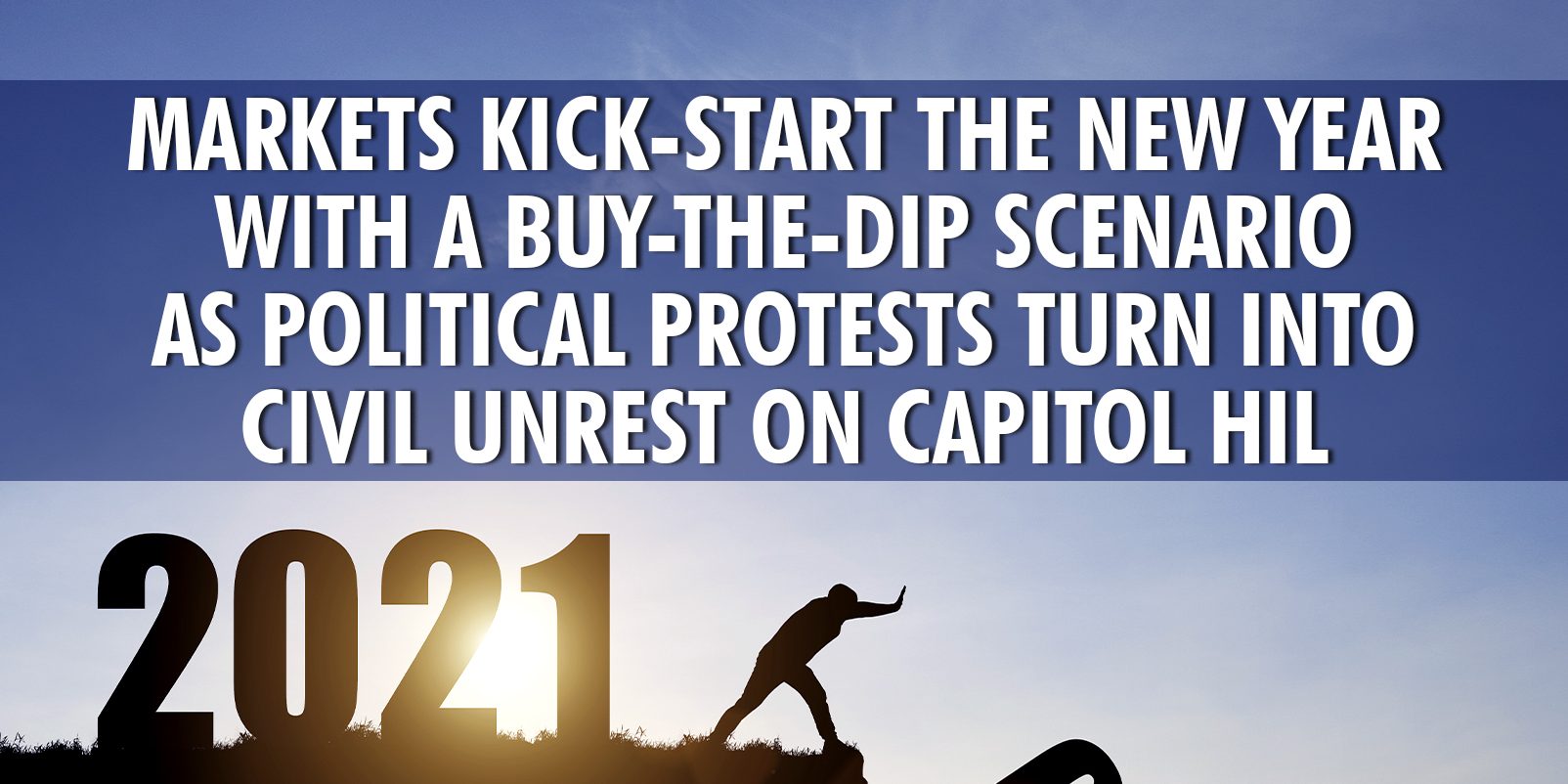 On Monday, the markets kicked off a new year following an up-and-down 2020. In all, the just-concluded 12 months saw a high single-digit advance by the Dow Jones, a low double-digit gain by the S&P 500 and a stellar increase of more than 43% by the tech-heavy NASDAQ.

This was a remarkable performance given the challenges faced by Covid-19 and the consequences suffered by the economy.

At the start of trading, major indexes declined due to profit-taking across the market.

Investors wanted to take their profits at the start of the year, which in turn, as mentioned, pushed the market downwards.

10 of the 11 S&P 500 sectors finished in negative territory. The worst performer of the day was the real estate sector, while the energy sector was the only sector to finish in the positive territory.

The stock market begins the year with valuations extended and the risks of a reversal on disappointing news certainly present. Overall, though, our sense is that the bull market can be sustained in 2021, however the margin for error will be small.

On Tuesday, stocks started the first week of the new year on a mixed note, with mostly positive results in Asia kicking off the day’s trading, and the European bourses followed suit. In the United States however, stocks posted sizable losses for their session possibly driven by slow distribution of the much-anticipated Covid-19 vaccines which in turn spooked investors.

A buy-the-dip scenario however assisted major indexes in finishing the day in the positive territory.

The Dow Jones grew 0.6%, the S&P 500 was up by 0.7% and the Nasdaq increased 1%. The market also rallied due to a strong ISM Manufacturing Index reading for December. December’s manufacturing index rose to 60.7% and therefore indicated an acceleration in manufacturing activity.

Cyclicals, small-caps, and commodities benefited from this news and as a result, the materials, energy, and industrials sectors performed strongly during daily trading.

However, market performance seemed somewhat restrained as investors waited on news of the Senate runoff elections in Georgia.

Altogether, declining outpaced advancers by more than a 2-to-1 margin.

Elsewhere, oil prices also had a down day, with light sweet crude falling 2.5%, to about USD 47.35 a barrel. OPEC and its allies are meeting again today as they work toward an agreement on output levels. The commodity has advanced 2.7% over the past 30 days, but it is still off nearly 25% from where it was a year earlier.

As we look to the new day, most of the Asian markets had another positive session, but the European bourses are in negative territory.

Meanwhile, U.S. stock futures are suggesting the major indexes will open to the downside, while crude oil is up about 1%.

On Wednesday, small-cap and cyclical stocks performed well due to the prospect of a Democratic-controlled Senate.

Investors seemed optimistic due to the possibility of more fiscal stimulus. The Dow Jones was up by 1.4% by close but reached higher territory during intraday trading. The index lost its gains when a group of pro-Trump protesters breached Capitol Hill.

The S&P 500 grew 0.6%, while the Nasdaq dropped 0.6% due to weakness among the mega-cap stocks. Due to standout performances amongst small-cap and cyclical stocks, the financial, materials, energy, and industrial sectors in turn, performed well in daily trading.

The information technology and communication services sectors under-performed due to the prospect of enhanced tech scrutiny under a Democratic Senate.

Overall, stocks gained back more than half the week’s opening-session loss. Also advancing on the day were oil prices, which reached their highest point in the past 10 months, as Saudi Arabia said it would further reduce output.

Importantly, the stock market gains came despite the continuing spread of Covid-19 and the consequent lockdowns.

On Thursday, the day began with historic and very troubling events in the United States of America, as political protests turned into civil unrest on Capitol Hill.

The United States stock market delivered strong gains during the middle day of the trading week, except for some of the big technology stocks. The investment community also looked past the election results from Georgia, that will change the balance of power in the Senate.

Leading up to the runoff elections, investors were worried that if Republicans lost control of the Senate – and there was no divided government in Washington D.C. – it would lead to more regulations and possibly higher taxes for corporations, of which neither is viewed favourably by investors.

The Georgia development brought fears that the tech giants may now face tougher regulations in the coming years and may see higher tax bills if President-Elect Joe Biden follows through on his campaign promise to raise the corporate tax rate, thus we saw some major rotation out of the big tech names and into the small-cap sector. The small-cap Russell 2000 climbed 4% on the day.

Major indexes closed higher due to strengthening in the information technology sector.

Investors bought the dip in technology from yesterday, helping the Nasdaq rise by 2.6%. The S&P 500 grew 1.5%, and the Dow Jones advanced 0.7%. Information technology and consumer discretionary were the best performing sectors, but financials and energy also performed well.

The market was additionally optimistic on strong economic news. The ISM Non-Manufacturing Index for December rose to 57.2% as manufacturing expanded more rapidly than it did in November. However, initial claims for the week ending on January 2 remained elevated at 787,000.

On Friday, major indexes posted gains with positive performances in the technology and consumer discretionary. The Dow Jones advanced 0.2%, the S&P 500 gained 0.6% and the Nasdaq grew 1%.

Political headlines dominated the day, with a focus on potential additional stimulus as well as possible additional impeachment articles.

With these headlines, value securities struggled to perform. Growth securities outperformed and bolstered the market. The economic news of the day was mixed.

The hospitality, leisure and government sectors saw the biggest loss in payrolls.

Manufacturing payrolls increased. Among labour market news, the unemployment rate remained at 6.7%, and average hourly earnings came in above expectations.