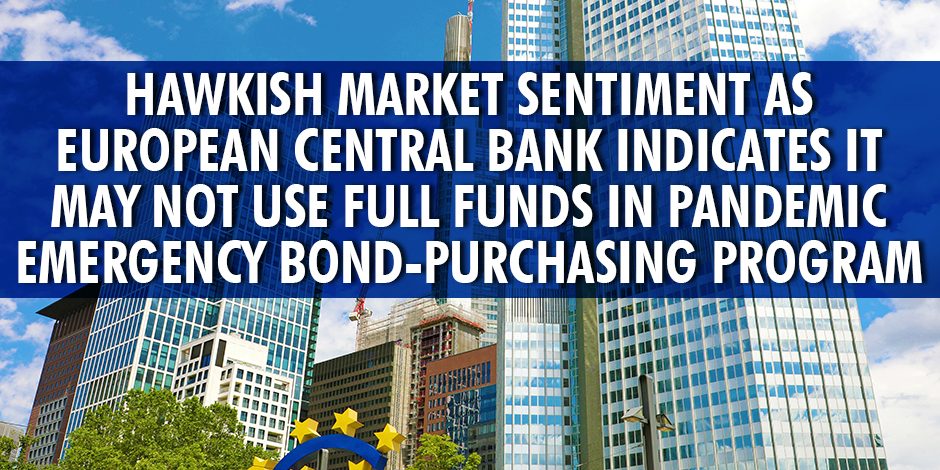 The UK’s FTSE 100 Index was down 0.60%, held back by the GBP strength relative to the USD and fears that the strict coronavirus lockdown would not end anytime soon.

Core eurozone government bond yields rose after the European Central Bank (ECB) indicated that it may not use the full amount available in the pandemic emergency bond-purchasing program. This news was interpreted by the market as somewhat hawkish.

Gilt yields rose on optimistic comments about an economic recovery from Bank of England Governor Andrew Bailey and the encouraging pace of inoculations in the UK.

Governments continued to extend lockdown measures amid concerns about the spread of highly infectious mutations of the coronavirus.

The Dutch government imposed the first nationwide curfew since World War II and banned flights from the UK to stop the spread of a mutated variant of the virus.

European Union leaders stepped back from imposing an EU-wide travel ban but warned that stricter lockdowns measures are likely to persist due to the new strains of the virus.

Ireland will extend its lockdown, which was due to end February 5, through to March 5.

UK Prime Minister Boris Johnson told broadcasters that it is “too early” to say when the national lockdown will end, raising fears that restrictions could last until mid-year.

Prime Minister Conte comfortably won a confidence vote in the lower house of Parliament and scraped by in a Senate vote after the exit of a coalition partner last week precipitated a political crisis. He also won backing for a EUR 32 billion economic support package to deal with the coronavirus pandemic and its fallout however, he is struggling to attract sufficient support among senators to strengthen his minority government and is considering whether to call fresh elections.

BoE Governor Bailey said at an online event that he expected a “pronounced” economic recovery in the UK later in the year due to the rollout of vaccines. Earlier, the BoEs Chief Economist Andy Haldane said he expected the economy to begin to recover quickly in the second quarter, potentially enabling the government to end its support for furloughed workers before the recovery is complete.

The major indexes moved higher for the week, hitting new intraday highs on Thursday before a pullback on Friday. Communication services led the gains in the S&P 500 Index, boosted by a sharp gain in Netflix shares following its report of surprisingly large subscriber gains in the fourth quarter.

Facebook and Google’s parent company, Alphabet, were also strong, as were video-gaming stocks, while energy shares lagged as oil prices fell back on a surprising rise in U.S. inventories. As fast-growing technology-related stocks led the gains, the market’s recent rotation into small-caps and value stocks reversed, at least temporarily.

The market was closed on Monday in observation of Martin Luther King Jr. Day.

Hopes for substantial new stimulus under the Biden administration appeared to drive much of the gains early in the week.

On Tuesday, former Federal Reserve Chair and Treasury Secretary nominee Janet Yellen told the Senate Finance Committee that it was necessary to “act big” to help the economy deal with lockdowns and high unemployment. Investors may have been further encouraged by her statement that President-elect Joe Biden was focused on supporting the economy rather than raising taxes.

Biden’s inauguration on Wednesday took place without any significant protests or violence, which also seemed to calm nerves on Wall Street.

Coronavirus news appeared to be another driver of sentiment. President Biden repeated his goal of 1 million vaccinations a day for the first 100 days of his presidency, although there was some confusion about whether this meant 50 million Americans getting the recommended two doses of the Pfizer/BioNTech and Moderna vaccines, or 100 million first doses. Among his first acts in office, Biden also reversed the Trump administration’s decision to withdraw from the World Health Organization, while the nation’s leading infectious disease official, Dr. Anthony Fauci, said that additional vaccines should be on their way soon.

Daily deaths from the virus in the U.S. hit the second-highest level on record on Wednesday, but daily cases and hospitalizations showed signs of moderating. Some health experts warned that the reprieve might be temporary given the arrival of more infectious strains of the virus, however.

Japan’s stock markets were relatively unchanged for the week. The Nikkei 225 Stock Average grew 0.4% and recorded another multi-decade weekly closing high. For the year-to-date period, the widely watched market yardstick is ahead 4.3%.

The large-cap TOPIX Index was about flat, however, and the TOPIX Small Index modestly declined.

The yen was little changed for the week and closed near JPY 104 versus the U.S. dollar.

Japan’s exports increase for the first time in two years.

According to customs data, exports climbed 2.0% in December versus the year-ago period and marked the first positive reading since November 2018. The export data showed significant improvement from November’s 4.0% decline and the early-2020 double-digit contractions. The gains were powered by growth in plastics, nonferrous metals, and semiconductor production equipment, although auto-related product shipments were lower. Import data were also weak, declining 11.6% versus forecasts for a 13.9% fall-off due to a reduction in crude oil, coal, and aircraft products.

Japan’s government announced that it has agreed to buy additional vaccines for 12 million people from Pfizer. The latest agreement means the government will have enough to treat 72 million people, which is more than half of the country’s population of 126 million. The Pfizer/BioNTech vaccine is the only product under review by the Health Ministry, and it is expected to receive approval on February 15. Officials said that the vaccination efforts for Japan’s general population are expected to begin in May, after prioritizing medical staff, people 65 years and older, those with pre-existing conditions, and workers caring for the elderly.

In an early test case for U.S.-China relations, China’s three biggest telecom companies appealed the New York Stock Exchange’s recent decision to delist their U.S.-listed shares, a move that is expected to receive a response within 25 days.

On the coronavirus front, China now has 22 million people under lockdown as officials try to contain a recent outbreak in Hebei Province. Case numbers remain low compared with other countries, though a high number of asymptomatic infections and the rural location of some clusters have concerned authorities.

The People’s Bank of China left the loan prime rate unchanged for the ninth straight month.

In currency trading, China’s Yen was stable versus the USD.

Biden’s Infrastructure Plan, who will be affected
April 5, 2021

Is there easy way to earn money from Cryptos?
August 28, 2020
Search
Any Questions?
Please fill in the details below and a representative of our team will get back to you
Go to Top
We use cookies to ensure that we give you the best experience on our website. If you continue to use this site we will assume that you are happy with it. Ok