What determines oil prices in 2020? 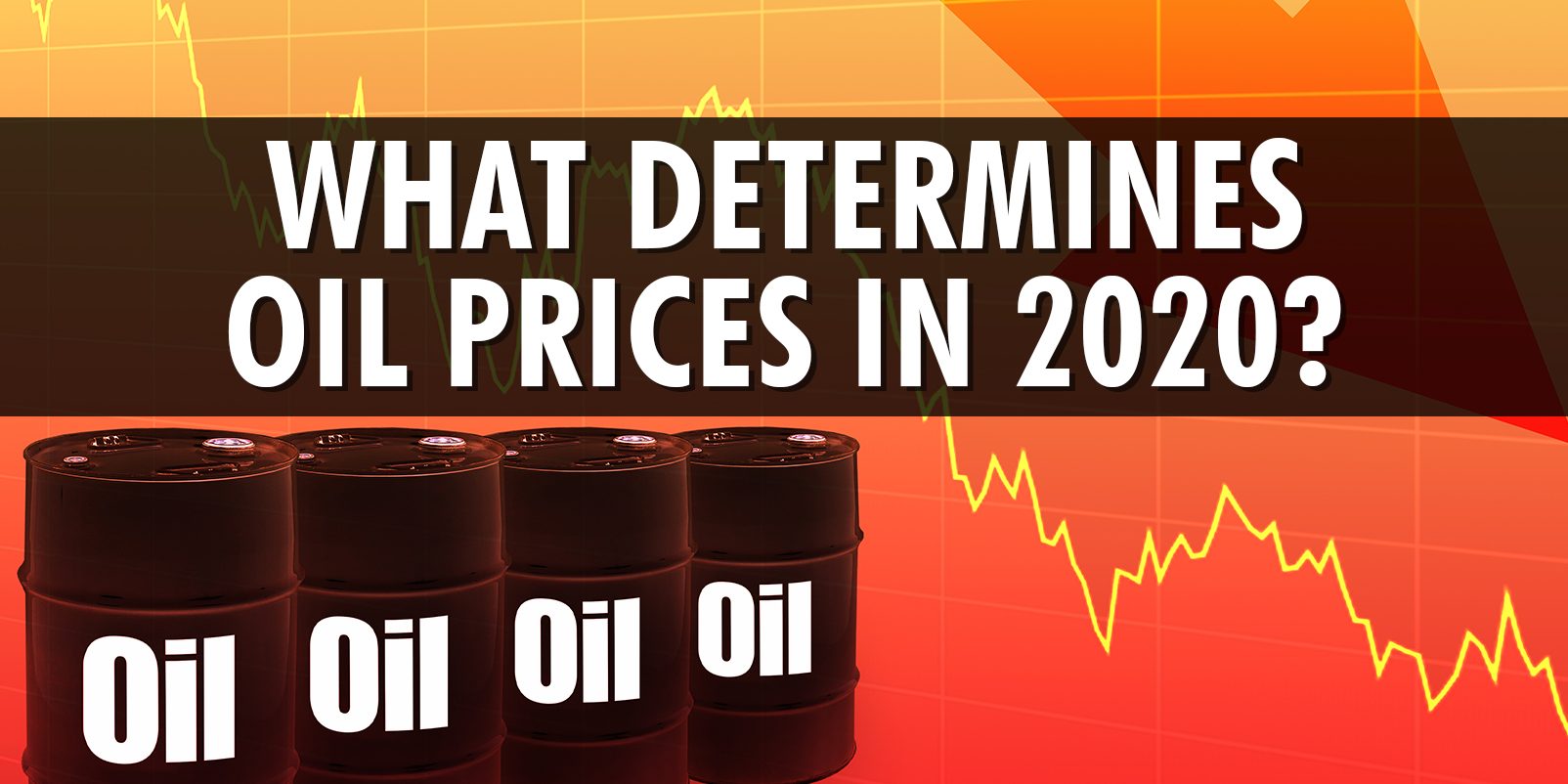 The New Volatile World of Oil

The price of US oil has turned negative for the first time in history as demand dries due to global oil demand is destroyed as the impact of the COVID-19 outbreak  and without a timeline on the end of the lockdown. Oil prices went negative because the oil future contracts expire today  and with storage options dwindling in some places.  Given that WTI futures contracts are settled through physical delivery, buyer in the market have been lacking and thus speculators have been unable to offload their oil positions, as such, oil prices are in free-fall making negative oil prices a reality, which in turn means that front contracts holders are paying someone to take them out of the positions before expiry.

In the last 3 years, Russia and Saudi Arabia known as OPEC+ that supported oil prices above $50 and mostly near $70 barrel. Back in the early nineties, the Chinese economy had been growing at around 15% and recovered well after the 2008 financial crisis.

The drop in oil prices continued as the oil market has been battering multiple enemies over the last couple of months – namely demand remained low, storage limitations, over productions and oil supply reduction. 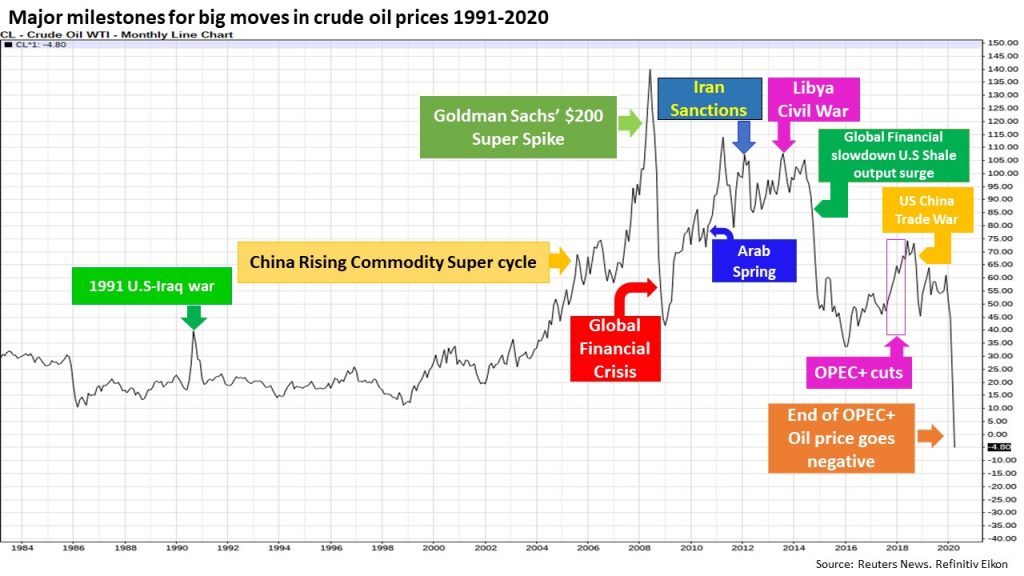 The world economy is forecast to face a severe recession since 2009 financial crisis, IMF project global growth in 2020 to fall to -3 percent in the April 2020 World Economic Outlook. The COVID-19 outbreak has resulted many countries now face multiple crises—a health crisis, a financial crisis, and a collapse in commodity prices, which interact in complex ways. Country reliant on tourism, travel, hospitality, and entertainment for the growth are experiencing particularly large disruptions.

On Sunday 12th April, the OPEC+ deal did agree to historic production cut of 9.7 million bpd in May and June,  in any event, the cuts pale in comparison to the decline in demand. The bigger question is how much economic output and petroleum consumption will be lost permanently in the second half of the year and into 2021 as a result of the recession.

The ramifications of the COVID-19 pandemic were the main driving force, resulting in unprecedented worldwide oil demand shock and massive sell-offs in the global oil markets, amid a significant crude surplus.

The shutdown orders have contributed to significant contractions in service industries, including more than three billion people are locked down, prohibitions on migrant workers movements and work from home polices– has slowed its economy dramatically. This has reduced oil demand 29 million barrels a day. 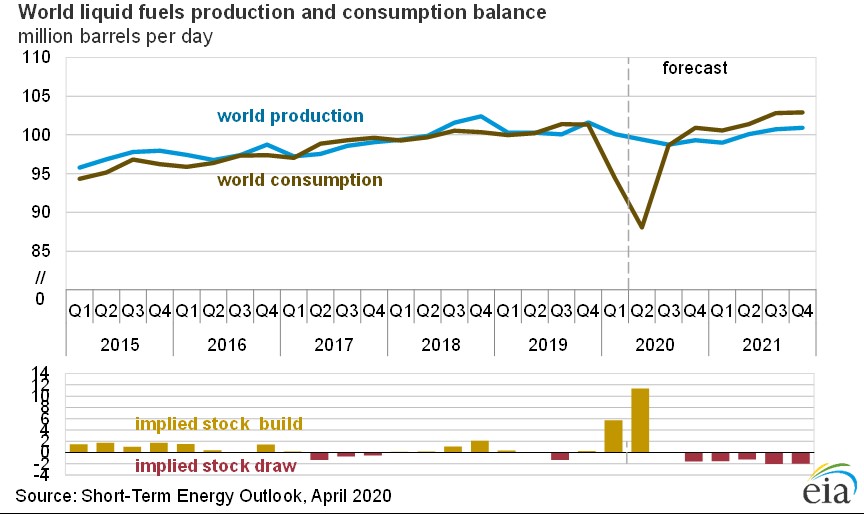 More recently,  after the March 6th 2020 meeting, OPEC and partner countries failed to reach an agreement to continue crude oil production 1.5 million b/d of cuts beyond the expiring March 31, 2020. The plan had been intended to keep oil prices steady despite the hit to demand as the coronavirus slows travel, manufacturing, and global supply chains. Russia refused to accept the proposed share, which caused OPEC countries to retaliate by raising production 2020 in what analysts were calling the start of price war and  the effects of the price war on the supply side are colliding against the depths of demand destruction at the same time.

OPEC +,Saudi Arabia, Russian and the US reach  record deal to cut production

On 12th April 2020,  OPEC+, along with Russian and the US – has partnered with other oil-pumping countries including the United States which have agreed to support the agreement both in reducing production by 9.7 million per day in May and June and also in using up some of the surface supply by putting into storage.  However, this is too little too late production cuts for the loss of up to 30 per cent of global demand as economies shut down to slow the spread of coronavirus. Global oil prices have slumped further after the world’s energy watchdog IEA (International Energy Agency) warned that the biggest production cuts in history will fail to offset the deepest fall in demand in 25 years. 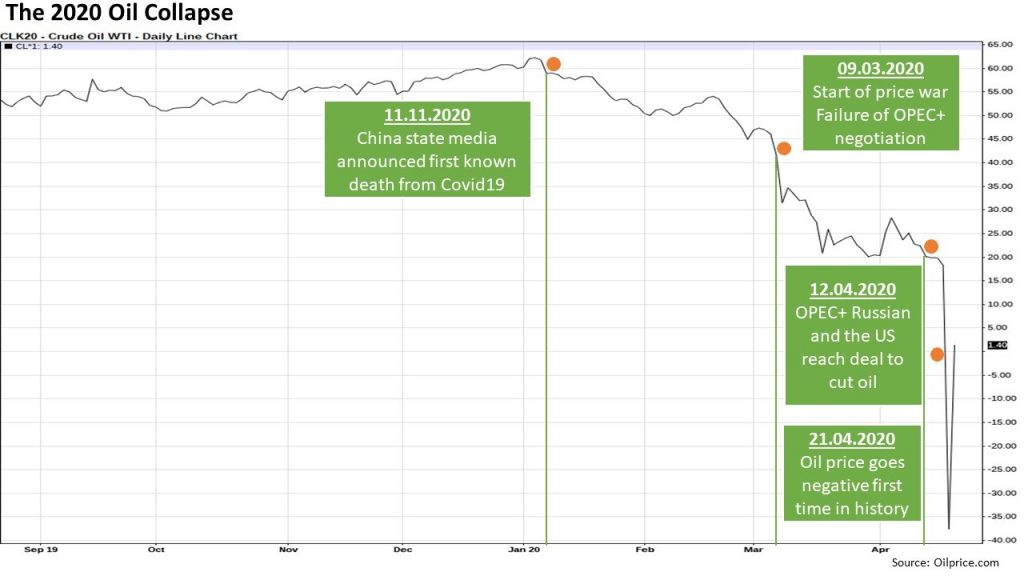 The coronavirus pandemic has meant countries in physical demand for crude products like petrol and jet fuel has left storage hubs at capacity. It has created an unprecedented demand shock in energy markets, with storage space – both onshore and offshore – quickly running out. Many oil-importing countries have stored large quantities of oil, taking advantage of cheap prices that may not last.

In some markets, oil producers are paying storage companies to take their crude, leading to a negative oil price dynamic (producers do this because the cost of paying someone to take the crude is less than the cost of shutting in production). Some oil producers  hoping to maintain their market share, have taken to storing their excess oil at sea, leasing tankers at high costs. 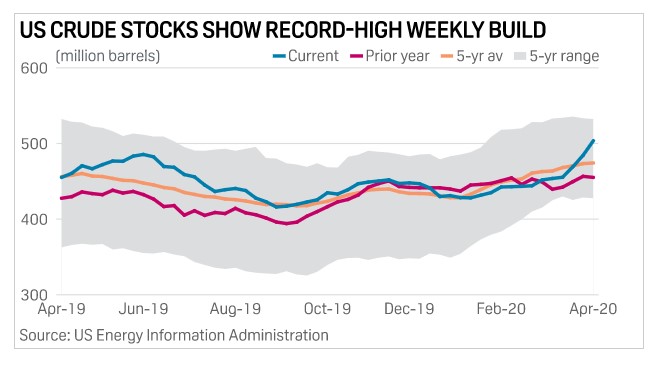 The US energy industry supports more than 10 million U.S. jobs, in addition, many energy companies borrow money to finance their production efforts. Cheap oil is likely to cause hundreds of US oil companies to go bankrupt. The current prices are far too low for US shale oil companies to turn a profit. Many will have to shut down production and lay off their workers. Countless jobs hang in the balance, including in Texas, a potential battleground state in the November election.

In a $20 oil environment, 533 US oil exploration and production companies will file for bankruptcy by the end of 2021, according to Rystad Energy. At $10, there would be more than 1,100 bankruptcies, Rystad estimates. Now the US oil prices crashed into negative territory for the first time ever.

Since the early 1970s the Organization of the Petroleum Exporting Countries (OPEC), which is dominated by Saudi Arabia, has been the prime mover in world oil markets. Russia, which for years was the second largest crude oil producer after the Saudis. Russia and Saudi Arabia depend heavily on their oil revenues to sustain their economies. Saudi Arabia’s economy is less diversified than the Russian economy, but both share a similar distortion, where oil revenues represent a very high share of their GDPs. (Saudi Arabia about 50 per cent, Russia 38.9 per cent), budgets (Saudi Arabia 87 per cent and Russia 68 per cent) and exports (Saudi Arabia 90 per cent and Russia 59 per cent. It’s difficult to believe that either country can do with such low prices. 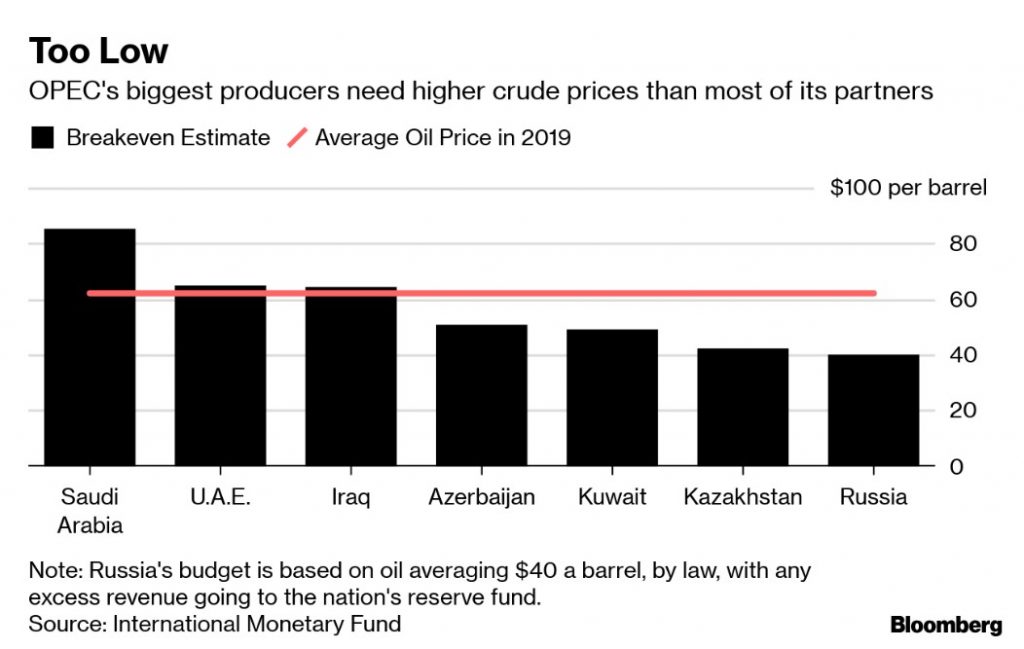