Where will the BTC/USD be in the next month ? 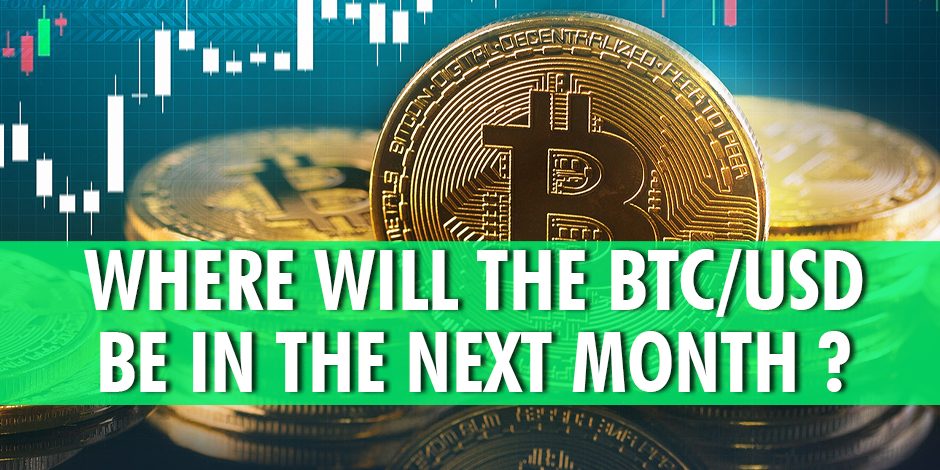 Where will the BTC/USD be in the next month ?

Bitcoin was supposed to be a revolution in the finance ecosystem, Bitcoin is world’s first decentralized cryptocurrency. From the mid 2010s, some businesses began accepting bitcoin in addition to traditional currencies. The cryptocurrency market is currently worth $1.56 trillion.

Among asset classes, Bitcoin has had one of the most volatile trading histories. Since the start of January 2021, bitcoin’s value has risen by 85 per cent and in mid-April it hit the latest in a series of record highs at $65,000. 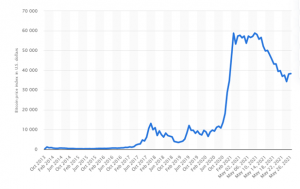 The first such instance occurred in  June 2011. Bitcoin’s price jumped from $1 in April of that year to a peak of $32 in June, a gain of 3200% within three short months. During Bitcoin’s early days, liquidity was thin and there were very few investors in cryptocurrency markets.

In 2017 the cryptocurrency was hovering around the $1,000 price range at the beginning of the year. After announcements of the launch of Bitcoin futures trading at the Chicago Mercantile Exchange (CME) and the Cboe options exchange (Cboe) were greeted with a price bump at crypto exchanges and helped push Bitcoin’s price from $975.70 on March 25,2017 to $20,089 on December2017.  This Industry developments is one of the major influence on Bitcoin’s price. However the price plunge to US$11,000 in 4 days.  This was the 3rd  such instance occurred in  June 2017

Three months into 2020, and it is already a year that markets, investors and consumers will remember. Covid-19 has fast become a global pandemic affecting more than 190 countries, causing unprecedented disruption to financial markets and the global economy.  Bitcoin has been following the global sentiment shift towards risk-off assets incurring losses, Bitcoin has sharply declined from around $8,000 to as low as $3,600 in a span of three days. March 2020 Was A Black Swan Event that many investors did not expect. The sudden drop caused the sentiment around the cryptocurrency market to turn cautious. According to ETF.com President and Bitwise Researcher Matt Hougan,  the black swan risk is part of a “large and exogenous” regulatory risk that has already produced results within the cryptocurrency ecosystem.

The price of Bitcoin since the May 2020 halving has seen an increase of nearly 300%, when the economy shut down due to the pandemic. The cryptocurrency started the year at $7,200. On the last trading day of 2020, bitcoin closed just under $30,000. It took less than a month for Bitcoin to smash its previous price record and surpass $40,000 in January 2021. In mid-April 2021, it flirted with $65,000. The price bounced around after that, with some notable swings, before taking a decidedly Negative news over the past week has dampened sentiment for bitcoin.

On the 12th May Wednesday Tesla has suspended vehicle purchases using Bitcoin due to climate change concerns, its CEO Elon Musk said in a tweet. The announcement sent bitcoin falling below $50,000 and set the tone for the big pullback in most cryptocurrencies.

on May 18th, the China Banking Association banned domestic banks and other financial institutions from supporting bitcoin. That includes processing payments, allowing customers to hold bitcoin in their accounts and converting bitcoin into yuan or any other currency. The price of Bitcoin fell as much as 29% Wednesday after the announcement. Other digital currencies suffered sharp declines as well. And China isn’t the only country clamping down on cryptocurrencies. Many banks in the Middle East are also barred from dealing in bitcoin.

On the  20th May 2021, In the US, The Treasury Department on Thursday announced that it is taking steps to crack down on cryptocurrency markets and transactions, and said it will require any transfer worth $10,000 or more to be reported to the Internal Revenue Service.

One day after the US official pledged to get tough on those using bitcoin to conduct “illegal activity broadly including tax evasion.” a top Chinese governmental body called for a crackdown on cryptocurrency mining, amplifying regulatory concerns.  Bitcoin’s price tumbled Friday 21st May, 2021, following an a Chinese government website published a statement summarizing a top-level meeting in which officials called for a crackdown on bitcoin mining and trading activities.

Regulation is among the most important factors affecting bitcoin price.

Until the time comes that governments around the world are able to evolve a suitable regulatory response to the rise of cryptocurrencies and blockchains, self-regulation offers a way out to ensure that customers are not duped by fraudulent elements within the ecosystem.

The sudden drop caused the sentiment around the cryptocurrency market to turn cautious.

Bitcoin’s market structure remains in a bullish state, especially considering that Continued institutional interest in the cryptocurrency further propelled its price upwards,  Institutional investors are eager to get in on the action and profit from the volatility in its prices, major Wall Street banks began working on crypto trading teams for their clients. with Goldman Sachs reopening its crypto trading desk and BNY Mellon, the oldest bank in the U.S. opening custody services for digital currencies.  Citi said Bitcoin could be the currency of choice for international trade. Coinbase, a cryptocurrency exchange company, went public through a direct listing in mid-April 2021. And Mastercard said it would start supporting “select crypto currencies” on its network. Both PayPal (PYPL) and Tesla (TSLA) made investments in cryptocurrency in early 2021.  Monday Feb 8th  2021 Tesla announced it has bought $1.5 billion worth of bitcoin. Bitcoin prices surged to new highs following Tesla’s announcement, reaching a price of at least $44,200. By the end of March 2021 Tesla reported a record quarterly profit, disclosing it had sold 10% of its bitcoin stake, netting a $101 million profit on those sales. even as governments around the world, such as Japan, have declared it a valid form of payment for goods.

The figures presented in this article refer to the past. Past performance is not a reliable indicator of future results.”