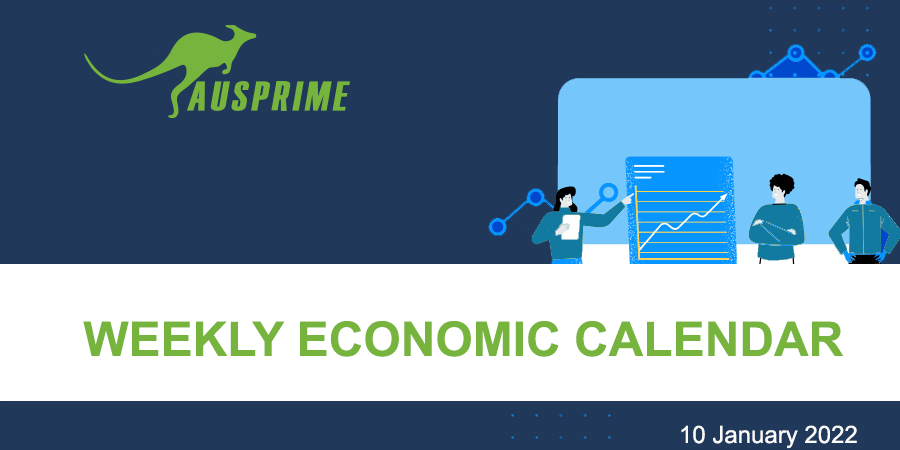 Here is what you need to know about the important news between January 10th 2022 and January 14th 2022, where we take a look at the economic data, market news and headlines likely to have the biggest impact on the market prices this week and beyond, as well as the US Dollar, and other key correlated assets.

The surprisingly hawkish minutes of December FOMC meeting were the main driver of market volatility last week. Markets were in full risk-on mode as worries over Omicron faded. Yet, sentiment turned after the Fed’s more hawkish tone in December’s FOMC minutes set the tone for financial markets this week, overshadowing the record surge in COVID infections.

Fed is not only seen as ready to raise interest rate as early as in March. It’s even starting to thinking about shrinking the Fed’s $8 trillion -plus balance sheet soon after rate lift off. The most dovish of U.S. central bankers now agree that they will need to tighten policy this year; the debate is no longer about whether, but how quickly.

On Friday, 7th January 2022, the U.S. Bureau of Labor Statistics released its December jobs data, and the   December’s jobs data were disappointing and a bit confusing, the non-farm payroll report might disappoint the markets with the much weaker than expected job growth, with employers adding just 199K jobs, however, had another strong gain. Unemployment is back below 4% at 3.9%. At this point, unemployment is at its lowest level since the pandemic began, and it’s close to where it sat in February 2020, before the COVID-19 crisis hit home. Wage growth accelerated with average hourly earnings gaining an impressive 0.6% mom. The set of data indicated tightness in the labor market which would continue to put upward pressure on wages and thus inflation. Fed should have come out in a stronger position for stimulus remove.

The US Dollar DXY index in 2020 was down 13% from its March highs. The first week of 2022 proved to be disappointing for the US Dollar. While the DXY Index added +0.07%, most of its gains were given back by the end of last week following the middling December US jobs report. Markets are still pricing in an increasingly aggressive Federal Reserve rate hike path despite the weaker-than-expected NFP print.

The 10-year yield rose to its highest level since January 2020 as traders ditch government bonds in preparation for higher rates. One of the “reasons” the USD has been rising (especially since September 2021) has been the idea that American interest rate premiums over other currencies would be increasing—that European and Japanese rates would not rise, or if they did, they would lag far behind US rates.

Sterling was the surprised winner. Dollar, ended as the second strongest, has indeed failed to ride on hawkish Fed and surging yields. The greenback was more mixed than the currency heat map suggested. Yen regained some ground after initial selloff. Aussie and Kiwi were the worst performer and would be guided by overall risk sentiment ahead.

Last week government bonds possessed a positive correlation to stocks. However, with the current outlook for rising interest rates via upcoming Federal Reserve rate hikes, which many believe could start as early as March, there’s a different dynamic at play. Higher rates from the Fed render current Treasury yields too low.

Oil is headed higher, after gaining 5% during the past week. Additional crude gains will be fuelled by the unrest in oil-rich Kazakhstan’s main city Almaty. As well, Libya’s output has been reduced to 729,000 barrels a day from the high of 1.3 million a day, in part because of pipeline maintenance.

Gold –The price of gold ended last week on a sour note after a disappointing US non-farm payrolls report failed to spur haven flows into the metal. A sustained rise in prices across the economy is the driving force bolstering rate hike bets, and some Fed officials are now calling for three rate hikes this year. Gold is expected to perform poorly in rising rate environments, given the asset’s non-interest bearing nature.

The mid last week release of the FOMC’s December minutes, which indicated the Fed had become more hawkish than markets had perhaps anticipated, and Friday’s disappointing Nonfarm Payrolls, which printed well below expectations, contributed to the gloomier outlook on risk as the week progressed.

This week will include a very hot inflation report, while inflation uncertainty is a major risk, it is worth remembering that the economy is in a very good place and the reporting season, starting this week, should provide a timely reminder of that. US-Russia talks, and a bunch of Fed speak. Inflation is not letting up and will continue to make the Fed uneasy.

Other important economic data is as follows: (All times listed are GMT+0)

15:00: US – November US wholesale inventories report

Thanks for reading! Have a great week!

Important Note: The information found on Ausprime platform is intended only to be informative, is not advice nor a recommendation, nor research, or a record of our trading prices, or an offer of, or solicitation for a transaction in any financial instrument and thus should not be treated as such. The information provided does not include any specific investment objectives, financial situation and needs of any specific person who may receive it. The past performance is not a reliable indicator of future performance and/or results. Past Performance or Forward-looking scenarios are not a guarantee of future performance. Actual results may differ materially from those anticipated in forward-looking or past performance statement.