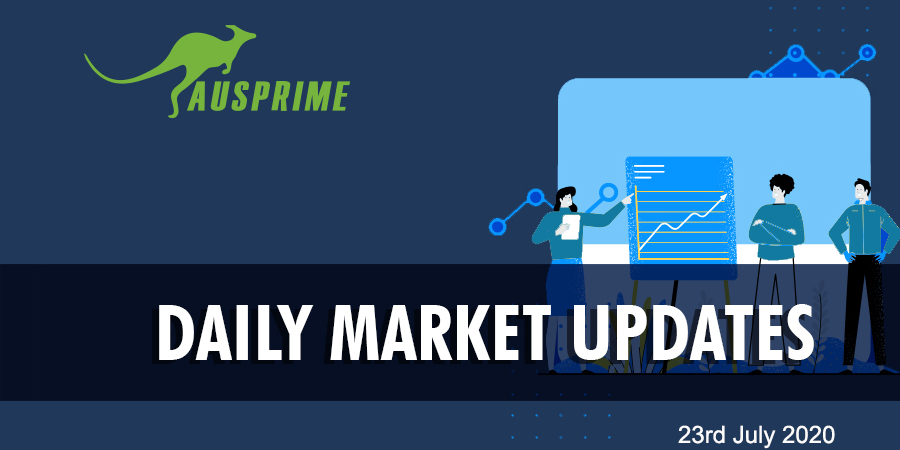 Asian stocks were mixed today along with US and EU equities, amid concerns over fresh Sino-US tensions. Hong Kong’s index yesterday lost 2.25%, while Japan’s index Nikkei lost 0.58% and Shanghai index has gained 0.37%. South Korea’s Kospi index lost 0.36%, after the announcement country’s economy contracted by 3.3% in April-June and exports fell by 16.6%. Strength in technology and health care stocks outweighed losses in energy companies and banks.

US equities market advanced higher yesterday, as traders weighed inflamed tensions with China, a potential extension to enhanced unemployment benefits, and coronavirus vaccine positive news. Additionally, investors are hoping that US Congress will pass a new spending bill before the $600 weekly unemployment-insurance boost is exhausted at the end of the month. Dow Jones industrial average close near 27,005.73, and rose by 0.6%, while SP500 jumped higher by 0.6% and Nasdaq Composite index rose modesty by 0.2%.

The euro EURUSD continued its surge higher following the EU recovery package deal reaching near-two-year highs close to $1.16. From a technical perspective Euro/Dollar may remain strong despite overbought conditions near 1.16 resistance level and may accelerate the momentum towards 1.17. Euro is appreciating against dollar for fifth week in a row. Reports that the U.K. is close to abandoning hope of a Brexit trade deal with the EU pushed sterling, 0.6% lower against dollar. Pound/dollar attracted some “buying from dips” yesterday amid sustained USD selling bias. According Reuters UK wants a Brexit free trade deal with the European Union but is prepared for a no-deal. Pound is currently traded well above 1.273 with the most recent major resistance level be at 1.2806. Further downside in Dollar/Yen is not ruled out, despite decent contention is expected in the 106.20 price range, according to opinion of FX Strategists at UOB Group. Japan Jibun Bank Manufacturing PMI improved to 42.6 in July, according to preliminary estimates.

Gold prices for August delivery on futures rose further by $1.60 and reached $1,866.50 per ounce, after climbing $21.20 to $1,865.10 per ounce overnight in another indication that investors were shifting some holdings to traditionally less risky assets due to risk aversion. Gold is currently traded at $1874 per ounce and it is a matter of time before touching $1900 record high. The focus also remains on the US Jobless Claims data later on the day and the discussion on the next round of the US fiscal stimulus.

Oil slid after hitting a four-month high yesterday, with West Texas Intermediate (WTI) crude oil dipping as much as 2%, to $41.14 per barrel. Brent crude, the international benchmark, fell 1.6%, to $43.62 per barrel, at intraday lows. The price of benchmark U.S oil for September delivery CLU20, 0.26% rose 8 cents to $41.98 per barrel in NYMEX, while Brent for September futures delivery picked up 10 cents to $44.39 per barrel. Citing official data, Reuters reported that oil exports from Saudi Arabia, the OPEC’s top producer, fell by 12 billion dollars or 65.0% in May 2020.

Yesterday, in the afternoon trading European stocks slid, after U.S. President Donald Trump warned the pandemic would “get worse before it gets better.” The pan-European Stoxx600 index fell 0.9%, giving back much of the last two day’s gains. Coronavirus fears are overshadowed by vaccine hopes and EU’s 1.8 trillion budget and recovery plan.