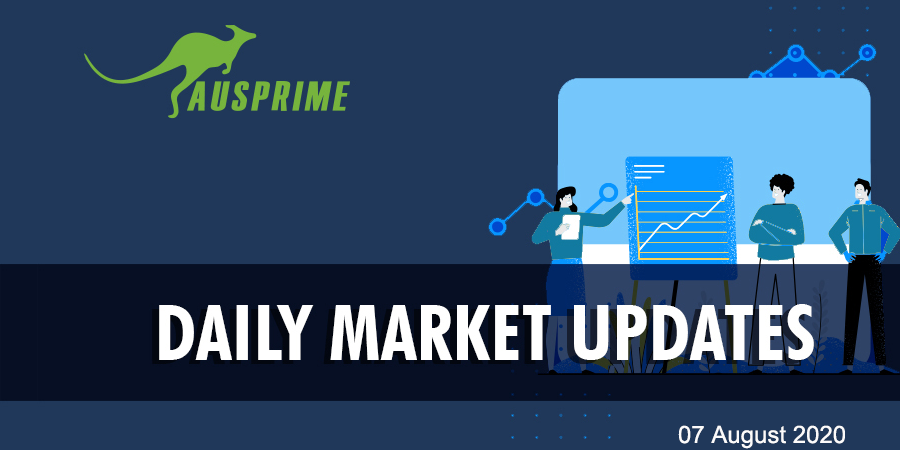 Asian equities are traded lower today as investors expecting many economic news for July. Shanghai Composite index lost 0.56%, while Hong Kong’s index went down by 0.55%. Japan’s index Nikkei slipped by 0.19% in the early trading and South Korea’s index Kospi increased by 0.3%. Important report will take place today for China’s exports sector which seems that start recovering from the pandemic hit. China’s exports have grown 7.2% on a yearly basis in July, disrupting expectations for a drop of 0.2%. Imports declined 1.4% year on year in contrast to a 1% rise as economist forecasted. This resulting in 62 billion trade surplus against expectations of 42 billion

Us equities advanced higher yesterday after the jobless claims report which showed a better than expected unemployment, with technology-heavy Nasdaq index closing at a record high and rose by 1% to 11108 level. The SP 500 index rose by 0.6%, or 21.39 points, to 3349.16 and Dow Jones gained 185.46 points, or 0.7%, to 27386.98. Additionally, stocks rose as the lawmakers pledged to make efforts to provide another $600 per week relief package against coronavirus.

Euro/Dollar declined today by 0.28% from gains at 1.19 yesterday, but resistance remains at 1.1916. Euro weaken amid a risk-off mood stemming from President Trump’s move against China’s TikTok and WeChat. The dollar is expected to weaken even more today after NFP report as the payrolls are widely expected to show less jobs creation during July month amid Covid-19. Despite better than expected jobless claims report of 1.186 million unemployed people against 1.415 forecasted, euro appreciated. Pound/Dollar is traded near 1.31 as UK Chancellor Rishi Sunak said the furlough scheme that is underpinning the economy cannot last forever. The dollar is gaining ground amid geopolitical tensions ahead of the Non-Farm Payrolls. Bank of England noted that may take longer for the UK economy to recover and it is predicted at the end of 2021 to recover the most. The Japanese yen traded at 105.55 per dollar after seeing levels around 106.4 against the greenback earlier in the trading week. Dollar struggles for a clear direction after flashing three days of losses against yen and yen it is expected to be even get stronger after the NFP report. Japan’s June Leading Economic Index is foreseen at 78.8 from 78.4 in the previous month.

Gold reached a new record high, extending a record rally for fifth consecutive days as dollar weakens and support the bullion to get near $2100 per ounce. December gold on futures -rose $20.10, or 1%, to $2,069.40 per ounce, registering its fifth straight record close after a 1.4% gain for bullion. Despite better than expected Us jobless claims report gold still appreciating. Meanwhile, VanEck, the firm that was one of the first to roll out gold-backed funds, is calling for gold to touch $3,400 an ounce. Michael Cuggino, CEO of the Permanent Portfolio Family of Funds, says gold can move a lot higher. It would “not be an unreasonable move” for gold to breach $4,000, he said in an interview.

Today Oil prices slid over concerns that demand growth will more likely fall again amid resurgence of coronavirus cases around the world. Oil prices were higher in the morning of Asian trading hours. International benchmark Brent crude futures were up 0.33% to $45.24 per barrel. U.S. crude Oil in futures market gained 0.45% to $42.14 per barrel. However, WTI and Brent added 4% weekly gains the highest gains since early July.

European stocks were opened lower today as new infections cases are picking up once again in Europe. Investors also keep an eye on the efforts in Washington as Democrats and Trump administration officials continue to negotiate over a new progress for coronavirus relief bill. EU Stoxx600 index declined yesterday after BoE noted slower rebound than expected in the country and Stoxx600 index dropped by 0.7%.