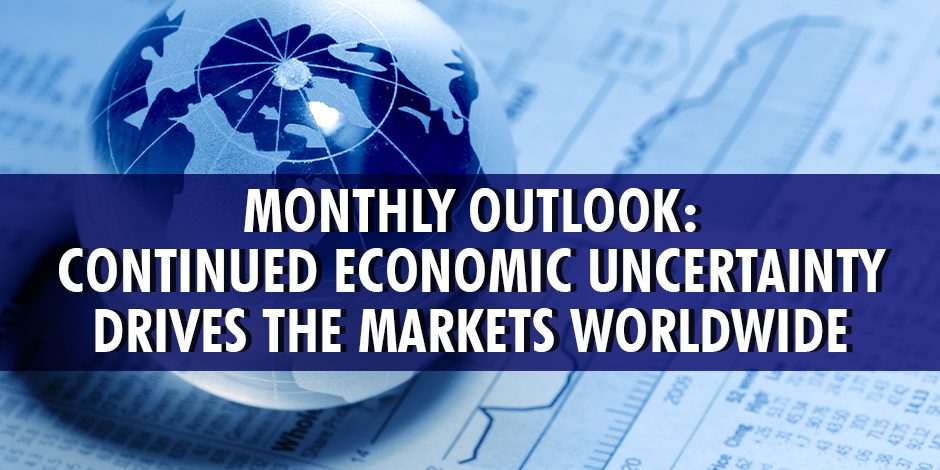 Global financial markets have been on a positive trend, but market sentiment has not yet fully returned to normal levels, and actual economic activity indicators are still relatively weak, and the momentum for further improvement has slowed.

In winter, people tend to spend more time indoors clustered together, as the northern hemisphere enters the autumn and winter seasons brace for a potential uptick in Covid-19 cases during the winter months and the risk of COVID-19 infection is on the rise. The global economic outlook remains subject to uncertainty as the pandemic continues to progress, with the number of daily new infections globally still increasing and many containment measures still in force. 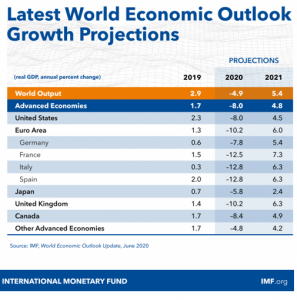 The State of The US Economy

The US Fed slashed interested rates aggressively, sharply expanded its balanced sheet through asset purchases, and set up several facilities to lend to struggling entities across the economy. As a result, global equity markets have rebounded strongly.

The huge boost to liquidity prevision in the advances economies has spilled over to emerging markets in search of yield, lift equity prices and compressing long term yield and cooperate spreads. As sentiment improved, the US dollar has weakened, particularly against emerging markets currencies.

The U.S. economy rebounded sharply in the third quarter from the severe contraction in the second quarter. In terms of monetary policy,

The state of the European economy

After the sharp economic downturn in the first half of the year, the Eurozone economy is showing clear signs of recovery.  Investors sentiment has improved significantly in the EU, first in response to monetary easing and bold fiscal policy actions, then following reports that the EU reached a recovery fund agreement , which also added boost to the euro zone’s recovery prospects.

In terms of monetary policy, The ECB extended the horizon for net purchase under the Pandemic emergency purchase programme (PEPP) to at least the end of June 2021. And the euro has strengthened on the back of the improved investor sentiment.

The state of the UK economy

The UK economy is expected to recover faster than expected in the third quarter, but the recovery momentum may weaken after that. Technical recession in the first half of the year due to the nationwide lockdown.  Uncertainty about increased restrictions amid rapidly rising infection rates, rising unemployment and Brexit-related uncertainty all pose downside risks to the outlook.

Monetary policy may also continue to increase quantitative easing. The Bank of England could cut interest rates to below zero next year after officials said preparations were under way to allow the central bank to support the economy with lower borrowing costs.

The State of the Japan Economy

Japan’s economy shrank more than initially estimated in the second quarter as capital expenditure took a hit from the coronavirus crisis, highlighting the challenge policymakers face in averting a deeper recession.

On September 16, the cabinet formed by Japanese Prime Minister Yoshiro Kan came to power. Although the macroeconomic policy of Shinzo Abe’s Government may continue, Prime Minister Kan Yiwei Kan may focus more on administrative and regulatory reform with the assistance of taro Kono, minister in charge of administrative reform.

The Bank of Japan kept its aggressive monetary stimulus unchanged at negative 0.1 percent and left its asset purchases unchanged a day after Yoshihide Suga took over as prime minister pledging to continue his predecessor’s stance on monetary and fiscal policy.

The State of the Canada Economy

Canada’s economy rebounded strongly in the third quarter, with housing sales, retail sales and car production data reaching or exceeding the levels before the outbreak.

Canada could be one of the fastest-growing economies among the Group of Seven industrialized countries in the third quarter, economists said, reflecting the country’s relative success in slowing down the spread of Covid-19.

Bank of Canada Gov. Tiff Macklem reiterated that point at a virtual symposium organized by the Federal Reserve Bank of Kansas City. He said that he was bracing for a “pretty long, bumpy ride” for the economy, and that the central bank would provide support—either through near-bottom interest rates or large-scale asset purchases, or a combination of the two—through a protracted recovery. 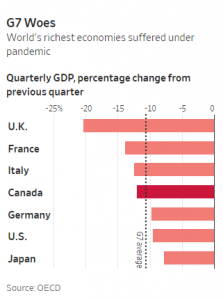 The risk of rapid spread of Covid-19 in the winter has increased. The US election is approaching and the political game between the two parties has intensified, and the market risk aversion increased. Looking ahead, in the short term, due to the approach of the general election, the uncertainty remains, and the risk of infection rises, short-term risk aversion may boost the US dollar index.  Regarding the upcoming US elections, we believe that no matter who eventually enters the White House, in the medium term,

the fundamentals may not be favor to the US dollar index, and the US dollar may maintain its downward trend in the medium term. However, in the short term, due to the uncertainty of the outcome of the general election, and the market risk aversion increased, the dollar may rebound slightly.

The euro failed to hit the 1.20 mark for the first time against the dollar, and the euro has not stood at this mark since 2018. Investors believe that higher speculative long positions are a potential drawdown risk for the euro.

In the medium term, the actual interest rate differential between the euro and the US dollar has further narrowed, reducing the attractiveness of the US dollar to investors. Especially under the new policy framework of the Federal Reserve, the current level of inflation in the United States is still relatively low, and the real interest rate in the United States is unlikely to rise sharply. Whether the euro can further appreciate in the future also depends on the sustainability of the global economic recovery. Although some recent real economic data in Europe are not satisfactory, economic conditions are still improving.

1) The epidemic has led to partial implementation of blockade measures in the United States, and the US economic recovery is hindered. The Fed may study to introduce more quantitative easing policies. The possibility of large-scale infrastructure plans before the US election is low, which is not good for the US dollar index.

2) The United States’ unlimited quantitative easing policy has led to more supply of US dollars, increased fiscal and current account deficits, and ultimately may put pressure on the US dollar.

3) In the euro area, international direct investment and central bank euro reserves have increased. Recent IMF data shows that central banks continue to increase their non-dollar asset allocation, which may push the euro up.

1) There was a second outbreak of the epidemic in the world, like the Spanish flu that year.

2) Italy’s fiscal budget problems or the reappearance of uncertainties in other regions, and the UK’s Brexit process is worse than expected, which may drag down the performance of the euro.

4) American xenophobia has led to a weak global economic recovery after the epidemic.

Brexit is once again becoming the main driver of the pound, and the controversial new “British Internal Market Act” has once again raised concerns about a no-deal Brexit. British national debt has rebounded in the past week, while the pound has begun to weaken. At the same time, since the unblocking, the speed of the British economic recovery has lagged behind other European countries. The market is overly worried about a no-deal Brexit, and the pound will pull back or create layout opportunities.

USDCAD, Recently, the Canadian dollar has continued to be boosted by the re-inflation environment and improved risk appetite. In addition, the improvement of the Canadian dollar’s fundamentals is also expected to support the Canadian dollar. On the one hand, crude oil prices have rebounded significantly after bottoming out. On the other hand, the Canadian government has controlled the epidemic well and further promoted the economic restart. High-frequency data showed that economic activity has also rebounded further. In addition, Canada’s fiscal policy continues to remain active, and the Bank of Canada is expected to wait until the first quarter of 2022 to raise interest rates again.

Gold suffered a string of losses in September and closed more than -4% lower for the month. While the fundamental outlook has undergone little change in that timeframe, as the Fed maintains interest rates at near zero and the market does not expect to raise interest rates in the near future,

Governments and central banks worldwide have injected stimulus to resuscitate domestic economies, helping gold rise more than 25% this year, thanks to its role as a hedge against inflation and currency debasement. The U.S. dollar weakness was particularly supportive for gold. In addition, the gold price has been further boosted by simmering tensions between the U.S. and China. 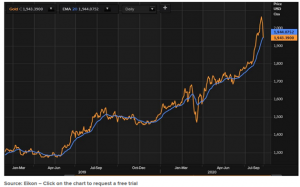 After some pronounced volatility in oil prices in April 2020, Brent crude prices have partly recovered and stabilized at around USD 40/bbl. On the supply side, the recovery side supported by the sizeable OPEN+ Production cut agreement that came into effect on 1 May and

While many factors affect the price movements of commodities, such as the US election, the new crown pneumonia, and geopolitical factors, crude oil prices have experienced relatively high volatility, and the weather has added uncertainty to the crude oil market.

The slowdown in economic activity resulting from rising Covid-19 has led to a weaker-than-expected demand performance, the US election The US presidential election in November presents a stark contrast for the next four years of US oil policy that could shape supply/demand dynamics domestically and abroad, with implications for shale, sanctions, trade and OPEC relations.

“Risks remain elevated and tilted to the downside, particularly related to the development of Covid-19 infection cases as well as possible cures. Furthermore, the speed of recovery in overall economic activity and oil demand growth potential in Other Asian countries, including India, remain uncertain,” Opec said. 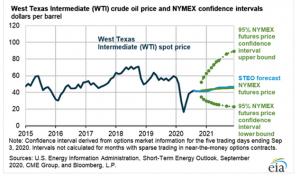