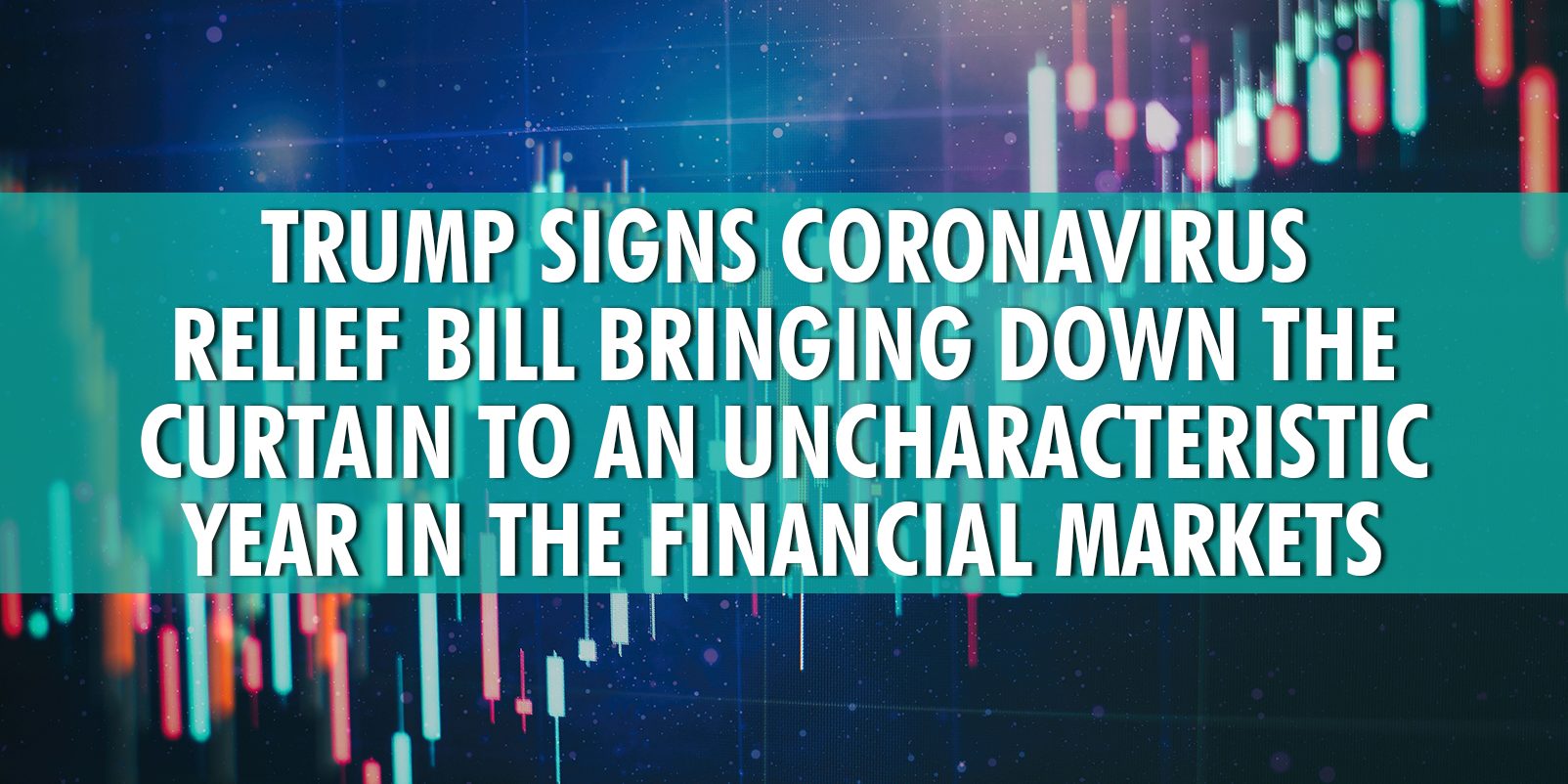 On Monday markets resumed trading following an extended layoff, due to the early close on Christmas Eve and the full-day closure of activities on Christmas day.

Markets resumed with some positivity however with some concerns as well.

The positive side is the continuous distribution of Covid-19 vaccines and the monetary support from the Federal Reserve. The negative side is the uncertain fate of the fiscal stimulus package and the slowing in the United States economy, as the disease resumes its worrisome spike. President Trump signed the USD 900 billion coronavirus relief bill on Sunday night – after earlier having expressed opposition to it – sending equity futures rallying in pre-market in response to this welcome action.

The president’s signature came after his repeated complaints that the bill’s USD 600 direct payments to many Americans were insufficient, as well as his demand that the bill also include new regulations on social media companies. House Democrats, with a small amount of Republican support, quickly passed legislation on Monday evening to raise direct payments to USD 2000, as President Trump had requested, but Senate Majority Leader Mitch McConnell objected to the measure being put up for approval by unanimous consent in the Republican-controlled Senate.

It appears that a further surge in the pandemic will occur in the weeks ahead. This, due to a new variant of the virus making its way through the United Kingdom, and likely to make its way across the Atlantic into the United States and due to an increase air travel around Christmas and New Year’s holidays. Couple that with the slower-than-hoped-for distribution of the vaccines in some states and the market could face potential headwinds as 2021 gets under way.

On Tuesday stocks opened the final trading week of the year sharply higher, boosted by positive sentiment that the signed USD 900 billion government relief package would push the economy forward.

After an hour of trading, the Dow Jones was up about 1%. The S&P 500 and the Nasdaq were also in positive territory.

The Dow Jones performance reflected strength in the materials, energy, and financial sectors. These sectors were among the worst hit by the economic troubles earlier in 2020.

By the afternoon, the Dow Jones had pulled back slightly, as a dip in oil prices contributed to a pullback in energy and materials stocks. There is some concern about increased supplies ahead of next week’s OPEC meeting. The S&P and the Nasdaq however, held steady.

Positive developments on several fronts, including the relief package, vaccine distribution, the Federal Reserve’s efforts to bolster the economy, and the resolution of Brexit terms, kept stocks buoyant.

In the end, the session ended on a positive tone particularly towards company shares such as airlines, leisure, and hospitality. So-called stay-at-home stocks were less sought after.

On Wednesday, the United Kingdom became the first country to approve the use of the vaccine developed by AstraZeneca and Oxford University and hopes grew that United States regulators would soon follow. Slow distribution of the currently authorized Pfizer/BioNTech and Moderna vaccines dampened enthusiasm along with the discovery of the first domestic case of an apparently more infectious strain of the virus.

Wall Street however, commenced trading on a positive, with stocks pushing higher due to optimism that the way could be paved for additional, easy monetary policies from the Federal Reserve in the year upcoming, even if the economy gets the boost widely expected from the mass distribution of Covid-19 vaccines.

Wall Street, which had begun the final and holiday shortened week on a positive note on Monday, commenced the session on Tuesday in similarly fashion, spurred on by the President finally agreeing to sign the USD 900 billion fiscal stimulus package after days of uncertainty. One piece of the financial puzzle remained, and that was whether a stand-alone USD 2000 payment to qualified individuals would pass Congress. It did so in the House, but its fate was uncertain in the Senate.

The stock market was set back modestly by weakness in some high-profile Dow Jones stocks, notably Apple and The Home Depot. However, Intel offset some of this weakness, after a major holder urged the company to explore other options.

Overall, this has been a stellar year for the market thanks to the vaccine rollouts, fiscal stimulus, and easy money policy on the part of the Federal Reserve.

On Thursday, the market year will come to a close. Year 2020 will go down in history as one of the most bizarre and challenging years of all time.

In short, we saw a collapse in equity prices resulting from the first wave of the coronavirus, a subsequent record comeback, and then additional gains to a succession of all-time highs for the key indexes.

Major composites are currently at record highs and there is no indication that the investment party is about to end.

Thursday’s stock market session is a reminder that notwithstanding the strong aggregate performance on Wall Street this year – led by the tech-heavy Nasdaq – investors are not out of the wood just yet.

The Labour Department reported that first-time jobless filings had come in at 787 000. This high tally, which represented a 19 000 decline from the revised total of 806 000 layoffs, attests to the continuing pain endured by so many people because of the pandemic. Long-term jobless claims also eased but there remains a long way to go on this front.

Indeed, given this pandemic, the significant job losses accompanying it, the tragic death toll – which is over 340 000 in the United States alone – and the uncertain months ahead, it is remarkable how high the stock market remains.

Looking at Wednesday’s session on Wall Street, stocks began the penultimate trading day of 2020 with a solid gain of almost 200 points in the Dow Jones amid renewed vaccine optimism. That helped offset worries surrounding the further escalation in coronavirus cases nationwide. The early strength, though, was not wholly sustained, as some late profit taking reduced the final gains.

On Friday, the market remained closed as it was New Year’s Day.

Shares in Europe rose, as a result of the UK – EU trade accord and the approval of a United States fiscal stimulus package.

The UK’s FTSE 100 Index recorded modest losses, partly due to the stronger GBP, which reached USD 1.3675, its highest level in a year.

UK stocks tend to fall when the pound rises because many companies that are part of the index are multinationals with overseas revenues.

Most European markets closed early due to the New Year’s Day holiday.

Finland’s Central Bank Governor Olli Rehn said that the European Central Bank was monitoring the euro exchange rate very closely. The euro climbed to its highest level in 2020, to around USD 1.2300, partly due to underlying weakness in the greenback and the post-Brexit trade deal.

The UK government extended its strictest restrictions to additional areas, seeking to curb a surge in infections, hospitalizations, and deaths caused, in large part, due to the new variant of the coronavirus. Three-quarters of the country is now in a de facto lockdown.

After regulatory approval, the authorities began deploying a second vaccine, one produced by AstraZeneca and Oxford University, enabling the government to accelerate its inoculation program.

EU countries began to distribute the Pfizer/BioNTech vaccine to those most at risk. The EU also exercised its option to buy another 100 million doses of the vaccine.

The United Kingdom was set to exit the European Union at 23:00 GMT on December 31 after UK Prime Minister Boris Johnson and EU leaders agreed to a post-Brexit trade agreement. The treaty came into UK law after Parliament voted overwhelmingly in favour of the deal.

The European Union and China agreed on an investment treaty after seven years of talks.

The EU would also receive benefits in the insurance and asset management industries, similar to the ones secured by the United States in its “Phase 1” trade deal with China.

The two sides have yet to ratify the treaty. The EU hopes it will come into effect in 2022.

Japanese stocks rallied in the holiday-shortened trading week through Wednesday.

Japanese markets were closed on December 31 for the New Year’s Eve holiday and remained closed for New Year’s Day.

Tokyo’s government reported 1,337 coronavirus infections on Thursday which is a record high, bringing the monthly total to more than 19 000. Tokyo Governor Yuriko Koike said that holiday shopping was the apparent cause for the recent increase, and she reiterated her request that people stay home and avoid large gatherings.

The city’s pandemic response experts warned that the capital could run out of hospital beds if the pace of new cases persists. Tokyo raised its alert level to the highest of four in mid-December due to the stress on the medical system and the discovery of the new more transmittable strains of the virus.

For the year, the SSEC Index advanced 14% and the CSI300 Index rallied 27%, buoyed by signs of an accelerating economy as China became the first major world economy to successfully contain the coronavirus.

Ausprime would like to take this opportunity to wish all our loyal clients and readers a happy and healthy new year and we hope that 2021 is faced with less challenges and more blessings.