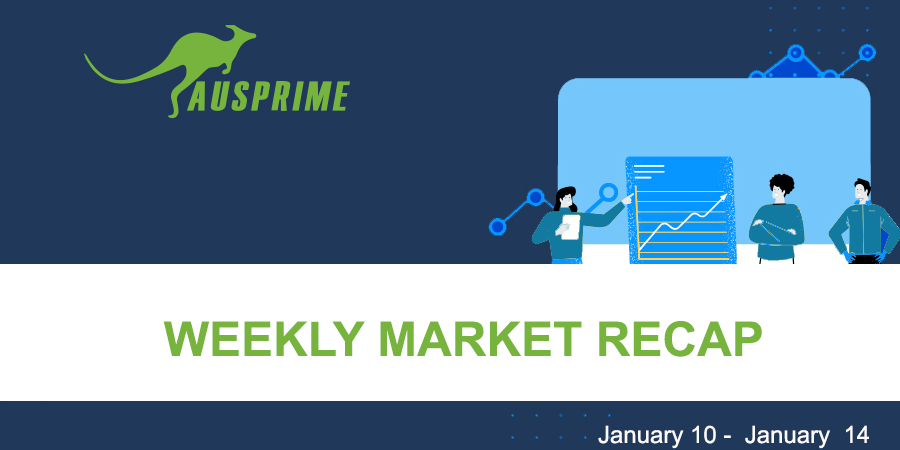 Happy Friday, traders. Welcome to our weekly market wrap, where we look back at these last five trading days with a focus on the market news, economic data and headlines that had the most impact on the financial market – and may continue to into the future for the US Dollar and other key correlated assets.

A quiet start to the week without any high-impact data releases. The US Bureau of Labor Statistics announced on Friday a rather disappointing December NFP reading. EUR/USD after the initial market reaction to the US December jobs report reversed its direction early Monday and was traded at the 1.1330 range. US Stock markets futures trade changed very little on Monday with S&P 500 Index loosing around 2% and Dow Jones stayed virtually unchanged. Gold struggled to capitalized on the selling pressure surrounding the dollar on Friday and was traded just below $1.800 throughout Monday.

ECB President Lagarde held a press conference on Tuesday stating that rising prices are a concern for many people and is taken very seriously by the ECB. The shared currency came under modest bearish pressure after comments and was trading around 1.1327 on the day. Later on, USD fell sharply following the comments from US Fed Chairman Powell testifying before the Senate. Gold advanced up to $1.820 and WTI got a boost from the weaker Dollar and was traded around $81.40.

On Wednesday, the US Bureau of Labor Statistics released the December CPI data showing that inflation in the US rose to 7% on a yearly basis. This was the highest reading since June 1982. The greenback plummeted following the release while stocks rallied, and indexes gave up gains unevenly ahead of the close. EUR/USD traded at it’s highest in two months around 1.1450 while GBP/USD jumped to 1.3710. Gold advanced modesty and was traded in the $1.827 area while Crude oil prices were also up at around $82.60 per barrel.

Market stabilized a little bit on Thursday, after the Wednesday’s Dollar sell-off preventing it from further falling. US Department of Labor announced there were 230,000 initial claims for unemployment benefits which was above the expectations of 200,000.  Core PPI data were also released on Thursday and came out as expected at 0.5% m/m. Market did not show any notable reaction after the releases. Gold retreated at the $1820 range while Oil closed at $81.70 per barrel.

UK’s Office of National Statistics released early Friday the GDP m/m data which came out higher than expected showing that the economy in the UK is expanding.  US Retail Sales m/m report was also released later by the Census Bureau stating a drop of 1.9% in December. This was well below forecast expectations. The outcome of those two reports had very little impact on the market.

Thanks for reading! Have a great weekend.

WEEKLY ECONOMIC CALENDAR AHEAD
January 10, 2022
Search
Any Questions?
Please fill in the details below and a representative of our team will get back to you
Go to Top
We use cookies to ensure that we give you the best experience on our website. If you continue to use this site we will assume that you are happy with it. Ok